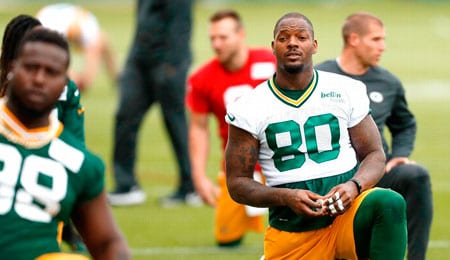 Each year, the NFL offseason shuffles the deck for all 32 clubs, causing a ripple effect across the league that’s also felt in Fantasy circles. With that in mind, we’re going to take a look at some of the players that have changed squads and what that’s done to their Fantasy appeal. We’ve already reviewed the quarterback position. Now, let’s look at the tight ends (that’s what she said)…

Martellus Bennett, Green Bay Packers: A year ago the Patriots traded for Bennett, envisioning him as the perfect complement to Rob Gronkowski to create mismatch nightmares for secondaries. Instead, Gronk was only healthy for about four and a half weeks and Bennett was thrust into the No. 1 job. Bennett’s final numbers were solid (55-701-7), particularly when you consider that he toughed it out for all 16 games despite being dogged by injuries of his own. Typically a move away from Tom Brady would be considered worrisome, but not when your new trigger man is Aaron Rodgers, who loved having the presence of another big TE last season. Clearly, Rodgers and Bennett have already established a chemistry, as you can see in the video below.

Bennett is unquestionably more talented than the man he replaced (more on him in a minute), possessing size, toughness and excellent blocking ability on top of his skills as a receiver. For all that praise, however, don’t lose sight of this: Green Bay’s most dynamic tight end during Rodgers’ nine seasons at the helm has been Jermichael Finley, whose best season was a relatively modest 55 receptions, 767 yards and eight touchdowns. That makes Bennett a strong Fantasy reserve.

Jared Cook, Oakland Raiders: Meet the man Bennett replaced. Cook played contractual hard ball with the Packers and when the dust settled he ended up in Oakland. It could be viewed as a step up for Cook’s statistical prospects as the Raiders were basically a two-man show in the passing game last year — Seth Roberts finished third on the team in receptions with 38.

Julius Thomas, Miami Dolphins: If Thomas doesn’t text Peyton Manning daily thanking him for the monster contract he got from Jacksonville, he’s an ungrateful dick. Manning plucked Thomas from obscurity in 2013 and turned him into a Fantasy monster with back-to-back 12-touchdown seasons. In the two years since he left Peyton’s tender embrace, however, Thomas has totaled 76 catches, 736 yards and nine TDs while missing 11 of 32 games.

Thomas was traded to the Dolphins in the offseason and will now try to develop chemistry with Jay Cutler, who was lured out of semi-retirement after Ryan Tannehill reinjured his knee. Cutler has played alongside some quality TEs over the years, but there are several red flags regarding Thomas’ 2017 outlook.

Gary Barnidge, UFA: Out of work since being cut by the Browns in late April, Barnidge is the most accomplished tight end available. His name comes up every time a TE gets hurt — usually one of the Ravens — but he has yet to sign on the dotted line. It’s possible he won’t get inked until after Week One so that his salary won’t be guaranteed. Or he might be brought in late since he’s a steady veteran and teams want to see what their in-house options can do before committing free-agent dollars.

Coming off a 55-612-2 effort catching passes from Cleveland’s depressing array of QBs last season, Barnidge could be an interesting volume target depending on where he lands.

Ladarius Green, UFA: What a difference a year makes. During the 2016 offseason, Green inked a four-year, $20 million deal to leave San Diego for Pittsburgh. Injuries ruined his first, and as it turns out, only season in the Steel City, and Green has been out of work for over three months now. His size/speed can’t be disputed, but his durability, or lack thereof, is the real issue.

After teasing Chargers fans for years as the possible heir apparent to Antonio Gates, Green is now just hoping to latch on somewhere for a second chance. He’d be a riskier signing than Barnidge, but he has superior physical tools and a higher ceiling.

Now it’s your turn. Let us know in the comments below which tight end on the move this offseason you’re most interested in adding to your Fantasy team.

By HC Green
Tags: fantasy football, Green Bay Packers, Martellus Bennett, New England Patriots, NFL, Rob Gronkowski, Tom Brady
This entry was posted on Monday, September 4th, 2017 at 1:41 pm and is filed under FOOTBALL, Free agents, Herija Green. You can follow any responses to this entry through the RSS 2.0 feed. Both comments and pings are currently closed.