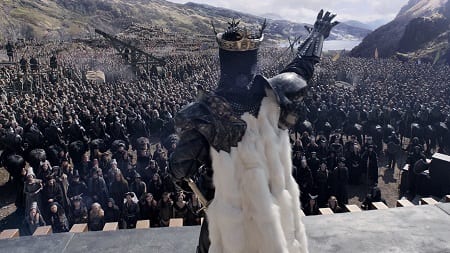 If you’ve seen what director Guy Ritchie did with the Sherlock Holmes mythos during his films of the same name you probably have a pretty good idea of what he’ll be aiming to do with another of Britain’s most beloved figures, King Arthur. Ritchie again teams with Jude Law and casts Charlie Hunnam (from Sons of Anarchy fame) in the titular role in King Arthur: Legend of the Sword.

In the midst of war against the warlock Mordred, King Uther (Eric Bana) manages to repel an assault on Camelot by reaching the mage and beheading him, ending hostilities in the process. He has little time to relish the victory, however, as he’s betrayed by his brother Vortigern (Law), who kills Uther and his wife, but not before they’re able to get their son to safety.

Decades pass and Arthur (Hunnam) has grown into a dangerous figure in the Londinium underworld where he was raised. Meanwhile, Vortigern rules England. When the tide suddenly recedes and reveals the sword Excalibur lodged in a stone, however, Vortigern takes it as a sign and starts rounding up all men of an approximate age to make them try to pull it free.

Although he initially eludes capture, Arthur is taken and retrieves the sword. He’s summarily set to be executed but is freed by a group led by Uther’s onetime general Bedivere (Djimon Hounsou). Hunted by the King and his Blacklegs, Arthur must accept his destiny and use Excalibur to defeat his uncle and become the ruler he was born to be.

How much you embrace Arthur as a swashbuckling and somewhat self-absorbed hooligan, as opposed to a regal King and leader of the Knights of the Round Table, will likely bend much of your opinion about the film itself. Either way, Hunnam plays it to the hilt, bringing a wholly unique mix of physicality and swagger to the character. At a minimum it’s interesting.

Visually, King Arthur is beautiful. The countryside in particular captures that same sort of medieval feel that Game of Thrones does so well. There’s also some clever creature design for the more fantastic elements, such as the opening battle sequence when a herd of massive elephants carry entire legions on their back for an assault on Camelot.

There’s no doubt Warner Bros. considers this “the first of” with a lot of world building, rewriting of the known Arthur legend and introducing characters that will carry forward to future installments (all of which depends on profitability of course). It doesn’t all work, but in covering a lot of ground the film keeps the pacing cranked up most of its time.

Between the setting, the feel and the casting (Aidan Gillen, who plays Littlefinger, and Michael McElhatton, who was Roose Bolton), Legend of the Sword invites comparisons to Game of Thrones, and it really can’t hold up. It’s not that these actors should never find work again, but seeing them in this film makes you think of the superior HBO show.

For as action heavy as the film is, there aren’t any real standout fights. The imagining of Excalibur as a weapon that basically slows time around it is interesting, but it gives way to a couple of mostly annoying fight sequences that are heavy on CGI (and dust) and light on the type of choreographed excellence audiences have come to expect from melee combat in movies.

Law feels wasted in his role as the evil king. It’s just too stereotypical of a performance for a man as talented as he is. Yeah, he’s vicious and unscrupulous, but there’s no depth to his character; he wants power at any cost because… well, he wants power.

There’s more than an hour of extras, though there are no deleted or extended scenes. It’s entirely a collection of “making of” featurettes, led by the 20-minute Sword from the Stone, which chronicles the process of recreating the legend of King Arthur from the ground up. There’s actually some overlap between the bonus materials, which seems unusual, but there’s plenty of Hunnam and other cast members doing “impromptu” feats of strength.

King Arthur: Legend of the Sword is an intriguing attempt at rebooting the mythos. It does enough to make us interested in a potential sequel, but there are some areas that’d need to be cleaned up for anything beyond that.

By HC Green
Tags: Blu-ray reviews, Charlie Hunnam, Jude Law, King Arthur: Legend of the Sword
This entry was posted on Friday, August 18th, 2017 at 6:56 pm and is filed under Uncategorized. You can follow any responses to this entry through the RSS 2.0 feed. Both comments and pings are currently closed.