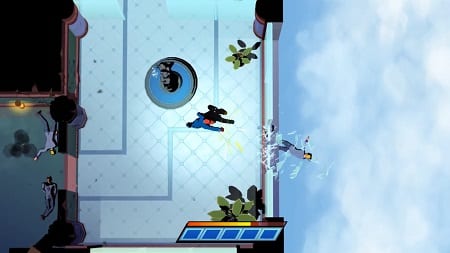 You are about to pull off the greatest heist humanity has ever known, and for a good cause too! As Mr. Shifty, you must infiltrate the villainous Chairman Stone‘s colossal skyscraper to steal the mega plutonium. Good thing you possess teleportation abilities because Stone’s modern fortress is armed to the teeth. Bring your reflexes, quick wits and ample doses of courage to face the mass of Stone’s minions.

Players get to choose from several user interfaces to best meet their needs. We preferred the mouse/keyboard approach, but others may feel more at home using a gamepad.

Everything feels extremely intuitive and fluid. One of the best parts of Mr. Shifty is how each punch landed by the player carries tremendous weight. It makes you feel like a superhero, but we’ll get to that later.

This game sports an interesting cel-shaded look. The environments are simply designed as to not distract from the action. Enemy types are all easily distinguishable from one another, but the game could use a bit more colour. The only major flaw in the graphical presentation is the frame rate drops that occur when multiple enemies appear, especially during the shift blocking segments.

Shifty‘s soundtrack is simple, pulse pounding and fun. It fits the badass character of Mr. Shifty like a glove and never lets up for a moment. Plus, the juxtaposition of the hard-driving rock and the blasé elevator music between levels always made us smile.

The developers did a fantastic job of creating a balanced character. Although Mr. Shifty is incredibly powerful, as he’s able to teleport and kill foes in just a few punches, he’ll be down for the count if he takes a single bullet. Although a single enemy usually won’t present much of a challenge, if you let your guard down for an instant, you’ll be dead.

Enemies range from dudes with handguns all the way to lightning-fast ninjas, but the biggest challenges take the form of clever level design. The enemies themselves aren’t particularly interesting, but what makes the game special is how they interact with each other, the environment and clever tricks the player can use.

For instance, opponents will fire their weapons as soon as they have Shifty in their sights, but should you teleport away from that spot, they will continue to fire at the last location they saw you. Players can then trick groups of minions into firing on each other, greatly lessening the workload in the process.

There are tons of instances like this, so it encourages gamers to fight with their brains, rather than charge in guns blazing. However, you can do that too, if you’re good enough.

Although there is a ton of different enemies and other hazards to overcome, the formula gets a little tired midway through the experience. That being said, things ramp up again towards the end. The difficulty is punishing but fair. Though we did rage quit a few times, we couldn’t blame our failures on anyone but ourselves.

Shifty‘s tone remains light-hearted and never takes itself too seriously. Nyx, Shifty’s eyes in the sky and self proclaimed “super hacker” is hilarious. She gives instructions quickly and clearly, while still managing to stay funny from start to finish.

The game’s only glaring flaw is the frame rate dips that we mentioned earlier. They’re common enough that they become a nuisance. However, the game’s strengths more than make up for this relatively minor technical issue.

Mr. Shifty is a fun, pulse pounding beat ’em up that overflows with charm and personality. With a decent difficulty level and engaging design, recommending Mr. Shifty is a no brainer.