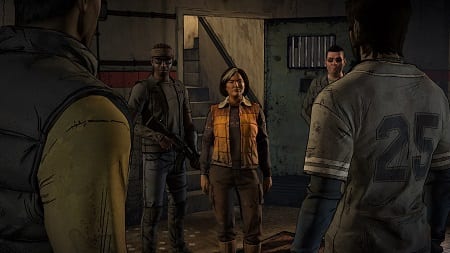 Thicker Than Water pits David’s life against the New Frontier.

Entering the fourth episode, Thicker Than Water, Javi’s brother David hasn’t really been given much dimension. There’s an interactive opening flashback, but it doesn’t do much to humanize him, and if anything we kept thinking “there’s a better way to do this.”

Then the story picks up with Javi and David captured at the hands of the New Frontier. Javi escapes early on while David is taken for a trial, and then the narrative splits a bit — first as Javi plans a rescue that no one really seems to want, then for a bit of time with Clementine as her back story is filled in.

This being The Walking Dead, you’re able to pick up story twists from quite a ways away, and what’s more interesting is when members of the New Frontier don’t act like assholes. In fact, there are several extended beats where this is shown, but the narrative path is clearly heading toward a showdown of some sort. Things erupt, bad stuff happens, and we’re led into the finale.

This episode moves quickly and has a high level of stakes, but we kept wondering why everyone is doing all this for a jerkface brother, or why supporting characters make completely bizarre and petty decisions out of nowhere.

On the other hand, we have more sympathy for Clem than ever before, and that’s the problem we’re seeing with this season. Even when there’s tension, Javi’s journey just isn’t as compelling as Clem’s, especially since his brother (and nephew) continues to be pretty unlikable, so why bother throwing it all away?

Despite that, we’re curious to see how it ends, but our opinion on this season is already pretty set. If TellTale can pull out a winner of a finale, it may save this season from mediocrity. As it stands, however, this may be where TellTale’s original bestseller jumps the shark (and gets consumed by it, because, ya know, misery).

A mix of interesting decisions and tender moments, Thicker Than Water is a mixed  bag with its potential dragged down by bad characters and predictable swerves.

By Mike Chen
Tags: A New Frontier Episode 4, New Frontier, Telltale Games, The Walking Dead, Thicker Than Water, Video Game Reviews
This entry was posted on Friday, April 28th, 2017 at 3:35 am and is filed under Mike Chen, Video Game Reviews. You can follow any responses to this entry through the RSS 2.0 feed. Both comments and pings are currently closed.