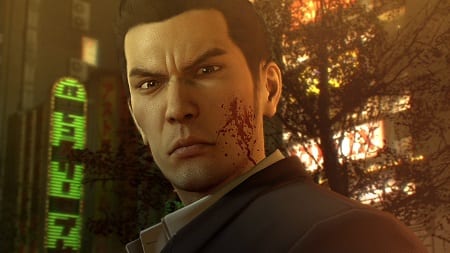 You’ve got a little something on your cheek.

We’ve long had an appreciation for Japanese culture, from Robotech to Puroresu, so perhaps my fondness for SEGA’s Yakuza series was predestined. Then again, maybe it’s the compelling storytelling and unique blend of action, character development and singular oddness. Either way, Yakuza 0’s arrival presents another glorious opportunity to visit Kamurocho and explore its unique world.

Stripped of all its narrative goodness, the Yakuza series is grounded in hand-to-hand combat in which you’ll typically take on multiple bad guys at once. While generally enjoyable, there is an old-fashioned feel to these fights as you rely on two-button combos (basic and strong attacks), a grab and a couple of defensive moves to take down your foes.

What’s missing is any sort of counter system — the kind that the Arkham games made popular and other series have crimped nearly wholesale. Instead you’re vulnerable to blindside attacks and getting stuck in animation sequences — whether throwing punches or being struck — is commonplace. That the fighting requires some nuance rather than just button mashing is nice, but it can also be frustrating.

As the hours piled up, so did the number of fights that felt cheap — ones in which enemies consistently land blows just as you pick up (or start to swing) a weapon, or in which multiple baddies unleash flurries so fast that you literally can’t do anything but take the beating and hope one time when you stand you can sidestep and regroup.

Thankfully, even though they’re more prevalent than you’d like, they’re still fairly rare versus how many times you’ll engage in fisticuffs. And when the CPU isn’t knocking you down just as you stand, the fights can be varied and brutal.

Both playable characters (Kiryu and Majima) have three unique fighting styles at their disposal, and they can switch mid-scrum via the d-pad. Each style has its pros and cons that make them well suited for particular situations, but we zeroed in on Brawler for Kiryu and Slugger (complete with unbreakable baseball bat) for Majima.

Successfully landing attacks builds up your Heat Gauge, which allows you to pull off some nasty moves on your opponents. Such attacks are contextual as well so you’ll be seeing new stuff to make your jaw drop or cackle in delight. Between the multiple styles and large number of Heat-based attacks combat remains interesting throughout.

Much in the same way the fighting feels old fashioned, the look of Yakuza 0 doesn’t scream next gen, a shortcoming that’s readily apparent in many of the non-essential NPCs. What the game nails, however, is the look and feel of the city. This isn’t a true open-world game, but it’s still chock full of stores to visit and areas to explore, all of it bathed in neon glory.

While it’s always a bit tricky to judge performances in another language, we’ve enjoyed the work done in the Yakuza series over the years. Just the tone and tenor of the various characters’ voices seemed to match the story, and we never felt like we were missing much having to read subtitles. The soundtrack is enjoyable as well, from the opening sequence on.

Set in 1988, Yakuza 0 serves as a prequel to previous games in the series, telling a two-pronged story centred on Kazuma Kiryu and Goro Majima. We start with Kiryu, who is framed for a murder that takes place at a key strategic location for the Dojima Clan known as the “empty lot.” To shield his foster father from retribution, Kiryu leaves the Dojima Clan to conduct his own investigation.

Meanwhile, we find Majima running a profitable cabaret club in Sotenbori in a continued penance for actions done years earlier. Desperate to work his way back into the Tojo Clan, Majima is given a task by his handler, Tsukasa Sagawa: find and murder someone named Makimura Makoto. When Majima learns the identity of the mark, however, his feelings stand in the way of his task.

As enjoyable as the combat can be, the strength of Yakuza 0 lies in its storytelling, unfurling a pair of compelling tales that serve as a great entry point into the series (or simply another layer of depth for longtime fans). For all the goofiness that permeates other aspects of the game, the main storylines are mature and well told.

It does speak to the sheer amount of things you can do, however, with tons of mini-games (karaoke, dancing, batting cages, bowling, gambling, phone club, etc.) and side quests. Each character also has a robust secondary business to run: Kiryu works as a real estate maven, buying and upgrading properties, and Majima operates a hostess club.

Yakuza 0 does yeoman’s work in encouraging your participation in these activities, offering immediate and long-term rewards with plenty of pricey combat upgrades to be purchased and other boosts that can only be acquired by completing dozens of various tasks. There’s even an additional fighting style for each character to be had for those that “complete” the respective side businesses.

There are a few low points along the way, mostly relating to seemingly luck-based activities like betting on “cat fights” and roulette, and patience is a necessity as large chunks of time will be spent watching cut scenes and/or reading subtitled dialogue over the game’s 40-plus hours (with the opportunity for many, many more).

If you’ve been looking for an excuse to dive into the series, Yakuza 0 is it. All of Yakuza’s best qualities are here with adult storytelling, in-depth character development, visceral fighting and loads of content. You shouldn’t miss it.

By HC Green
Tags: Robotech, SEGA, Video Game Review, Yakuza 0
This entry was posted on Monday, January 23rd, 2017 at 5:28 pm and is filed under Herija Green, Video Game Reviews. You can follow any responses to this entry through the RSS 2.0 feed. Both comments and pings are currently closed.