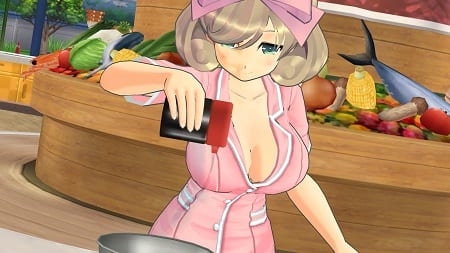 That’s how everyone dresses when they cook? Right?

Bon Appetit! was clearly designed with consoles in mind, as each key on the PC can be mapped to A/B/X/Y buttons and a d-pad. The default scheme is very unintuitive, using the down arrow to confirm, and the right arrow to go back. Players are better off creating their own custom control map, or just using the mouse.

Once in game, the controls work fine, but as is the case with many rhythm games, the prompts and inputs don’t always sync up with the music. This forces the player to rely on the visual cues, thus defeating the purpose of a rhythm game.

Let’s start off with the elephant in the room. As with all games in the Senran Kagura franchise, Bon Appetit! is about sex and exploitation. Every aspect is geared toward objectifying women. Jiggle physics: need we say more? There are tons of panty shots, boob close ups and more. We felt a little pervy after just a few minutes.

There’s a ton of music in Bon Appetit! — in case you forgot it was a rhythm game. Unfortunately, the songs are largely forgettable, bland J-Rock/Pop tunes. A rhythm game without engaging music is simply not acceptable.

As mentioned earlier, Bon Appetit’s main attraction is the female character’s bodies. The gameplay elements that are present serve only as an excuse to add another opportunity to gawk at boobs or butts.

There are several different game modes, but they all boil down to the same formula. The player chooses their character, and sometimes their opponent. They then engage in a cook off for the lecherous Hanzo, who will award a wish granting scroll to the victor.

Once the music starts, players tap the required keys, which are mapped by default to the WASD and arrow keys. As mentioned in the controls section, a major complaint is that the commands don’t always line up with the music.

Each cook-off is split into three dishes: two small courses and an entree. The plates are graded separately, but combos carry over between dishes. If the player’s performance is good enough, a heart container will fill up, triggering a special cut scene in the next dish. If the player hits the heart icon, the usual cooking animations are swapped out in favour of gratuitous panty and boob shots.

Should the player receive a perfect score, the opposing chef is stripped naked, censored with deformed faces and white lines, and placed in suggestive positions in a dessert. The chef then exclaims something about how humiliating it is to be looked at, or how she resents the player for forcing her into the situation. It’s unequivocally unsexy.

The one redeeming quality in Bon Appetit is the cut scenes featuring Hanzo after a perfect performance. They are the only nonsexual parts of the game… usually. It’s too bad that the developers feel they need to stoop to producing such sexist content to get an audience, especially when they are capable of much more clever entertainment.

A bare bones story is told between the cooking battles, but it isn’t particularly interesting. Most of it involves forced innuendos or just filler dialogue. Of course, each cut scene features plenty of jiggle physics.

One other notable inclusion in Bon Appetit is the dressing room. Players can dress and undress any character they desire in any number of costumes of varying skimpiness. One of the more disturbing aspects to this feature is when the player clicks on the model.

If you touch their head, breasts, or downstairs areas, the character will exclaim any number of unsettling remarks. Here are just a few: “Please don’t touch me. Please stop! I’m scared. Stop! Please! You can’t just harass me like this! No!”

Tamsoft writes on its website that its goal is to provide “fun, funny, and playful” content. Sadly, there is nothing fun, funny, or playful about women being touched against their will.

Once you get past the gratuitous sex in Senran Kagura: Bon Appetit! — Full Course, all that’s left is a bland rhythm game with bad music and weak controls.