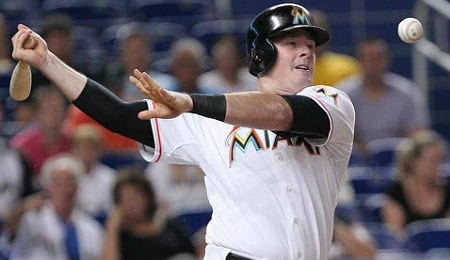 Justin Bour is helping pick up the power slack for the Fish. (El Nuevo Staff)

So the All-Star break has finally arrived — it seemed like just yesterday we were advising you on the best way to compile your Fantasy team for the start of the 2015 season. But no matter how bleak things might look, we still have half the year to cure what ails you. So without further ado, here are this week’s Fantasy baseball waiver wire recommendations:

Justin Bour, 1B, Miami Marlins (ESPN: 10.7 per cent; CBS: 23 per cent): No, Bour won’t make Marlins fans forget about the injured Giancarlo Stanton, but he’s starting to emerge as a thumper in the middle of Miami’s lineup, including a four-game home run streak last week. Bour kept the party going Sunday with another three hits (including two doubles) and three RBI. He can simply crush the ball (see video below) and there’s no reason to think he won’t continue to provide solid power the rest of the season.

David Peralta, OF, Arizona Diamondbacks (ESPN: 22.5 per cent; CBS: 42 per cent): Thanks to Peralta’s recent solid play, he has not almost matched last year’s production — halfway through this season — as he continues to get on base at a steady pace. If he continues to ascend he won’t be much of a secret for long, so jump on Peralta while you can.

Aramis Ramirez, 3B, Milwaukee Brewers (ESPN: 31.6 per cent; CBS: 39 per cent): Ramirez is still showing signs of power despite this being his swan song season. He may also be sought after on the trade market, which means he could end up in a lineup that offers him a little more protection.

Jason Motte, RP, Chicago Cubs (ESPN: 28.7 per cent; CBS: 38 per cent): The Cubs may not officially have labeled a closer, but Motte seems to be pretty much cemented as the guy, closing out two wins over his former club the Cardinals in a doubleheader last week.

Jim Johnson, RP, Atlanta Braves (ESPN: 27.8 per cent; CBS: 39 per cent): Johnson represents another new saves option after current Braves’ closer Jason Grilli suffered a season-ending injury. When Craig Kimbrel was dealt to the Pads, Johnson — a former closer — was passed over for Grilli, but now he’ll get a chance to prove he can get the job done again. Johnson has already saved five games this year, and don’t forget he logged an amazing 101 saves in 2012 and 2013 combined.

Willy Garcia, OF, Pittsburgh Pirates (ESPN: unowned; CBS: unowned): One of the Pirates’ top prospects, Garcia is establishing himself as a potential keeper league option after racking up 90 total bases in 53 games at Double-A to earn his first promotion to Triple-A. He started at Indianapolis slowly, but with six hits in the last three games, he’s now batting .270 over the last 10 games. Garcia has some power, but will need to improve his strike zone judgment to fulfill his potential.

Bobby Parnell, RP, New York Mets (ESPN: 4.6 per cent; CBS: 9 per cent): Parnell has looked very impressive in his return from Tommy John surgery, rapidly establishing himself as the next-in-line for saves behind Jeurys Familia on the Mets. Parnell’s command is still rusty, but it’s hard to argue with his 0.90 ERA and 1.10 WHIP. He’s a fine addition in holds leagues.

Michael Conforto, OF, New York Mets: (ESPN: 0.4 per cent; CBS: 9 per cent): Looking for the next big prospect that could get the call? With the Mets desperate for offense, it’s not a stretch to think that Conforto could get a look. The Mets’ first rounder (10th overall) last year has whipped through the system, already reaching Double-A, where he’s taken his game to another level. This kid is going to hit for a high average, with steals being the only thing he won’t supply.

Kevin Jepsen, RP, Tampa Bay Rays (ESPN: 8 per cent; CBS: 11 per cent): Okay, it wasn’t that long ago that we pimped Jepsen, but he continues to enjoy a strong year, ranking second in the AL with 20 holds. Forget about his ugly record; he’s already saved five games this year — doubling his career total — while improving his groundball rate. If Brad Boxberger gets hurt, Jepsen’s value will really soar.

By Michael Seff
Tags: Justin Bour
This entry was posted on Sunday, July 12th, 2015 at 11:06 pm and is filed under BASEBALL, Michael Seff, RotoRob, The Wire Troll. You can follow any responses to this entry through the RSS 2.0 feed. Both comments and pings are currently closed.