The Wire Troll: Eduardo Escobar is Heating Up 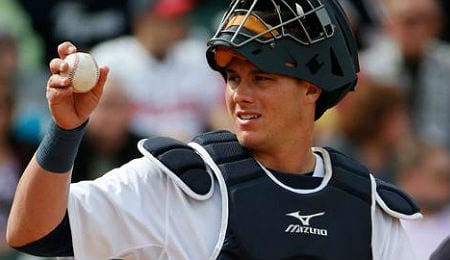 James McCann is flashing some offense with Alex Avila out. (Gene J. Puskar/AP)

Josh Hamilton should return to the Rangers next week; Carlos Gomez got beaned, but avoided a concussion; and Ike Davis has landed on the DL. Welcome to another week of Fantasy baseball.

Eduardo Escobar, SS/3B, Minnesota Twins (ESPN: 10.4 per cent owned; CBS: 9 per cent): Escobar has been a fairly hot commodity on the wire lately as he’s been getting a chance to play more with Oswaldo Arcia out. Last month, we slotted Escobar just outside the top 40 in our Third Base Rankings, but he’s been playing at a top 30 level because of the amount of action he’s getting. After three three-hit games this month, he turned it up a notch with a four-hit effort Saturday against the Rays.

Chris Owings, SS/2B, Arizona Diamondbacks (ESPN: 7.1 per cent; CBS: 23 per cent): Owings went 9-for-18 (.500) over a four-game stretch last week, netting at least two hits in each contest. After an up-and-down rookie campaign, Owings might finally be finding his stroke at the big-league level.

James McCann, C, Detroit Tigers (ESPN: 3.5 per cent; CBS: 13 per cent): McCann has three three-hit games this month, stroking a pair of doubles Friday, and will get regular playing time and could be a valuable Fantasy find with Alex Avila banged up once again. McCann has also flashed a nice throwing arm (see video below).

David DeJesus, OF, Tampa Bay Rays (ESPN: 2.7 per cent; CBS: 3 per cent): DeJesus continued his recent hot streak on Saturday with another multi-hit effort, his fifth this month to go along with two dingers. After an injury-plagued 2014 campaign, he’s back to being a consistent offensive contributor for the Rays this season.

Carlos Sanchez, 2B, Chicago White Sox (ESPN: 0.8 per cent; CBS: 3 per cent): Sanchez is back in the bigs after the Pale Hose optioned Micah Johnson. Though Sanchez is known more for his glove, his bat can occasionally surprise, so give him a look in AL-only leagues.

Maikel Franco, 3B, Philadelphia Phillies (ESPN: 14.7 per cent; CBS: 46 per cent): Franco took an 0-fer in his MLB debut Friday, but don’t panic over one game. The time is now for this highly-touted Phillies prospect.

A.J. Cole, SP, Washington Nationals (ESPN: 1.5 per cent; CBS: 8 per cent): Another highly regarded prospect, Cole struggled in his first go-round, but with Doug Fister on the shelf, Cole might get a couple starts, or at least get some innings out of the bullpen. Cole notched his first career save with three shutout innings Friday in San Diego.

Lance McCullers, SP, Houston Astros (ESPN: 4.4 per cent; CBS: 31 per cent): Astro pitching prospect McCullers — taken 41st overall in 2012 — will make his MLB debut Monday. This 21-year-old righty was unhittable at Double-A, earning a promotion to Triple-A on Thursday. A day later, he was on his way to the Show.

Kelby Tomlinson, 2B, San Francisco Giants (ESPN: unowned; CBS: unowned): The Giants’ 12th rounder in 2011 is repeating Double-A, but he sure seems to have figured it out this go-round. He’s racked up three straight multi-hit games and is batting a robust .341 over the last 10 games to raise his season BA to nearly .310. Tomlinson is flashing more extra base pop, although his work on the basepaths hasn’t been as good after swiping 49 bags last year. Put this 24-year-old on your Dynasty watch list as he looks nearly ready for the next step.

Luis Sardinas, SS, Milwaukee Brewers (ESPN: 0.2 per cent; CBS: 2 per cent): With Jean Segura (pinkie) on the DL, Sardinas was called up and has gone 3-for-6 with two runs in his first two games. Sardinas, acquired by the Brewers via trade this winter, looks like a nice short-term option.

Keone Kela, RP, Texas Rangers (ESPN: 1.2 per cent; CBS: 3 per cent): Neftali Feliz’s recent struggles could be leading to a changing of the closer role in Texas, so if you have room to stash Kela, it’s a good plan.

Wilmer Flores, SS, New York Mets (ESPN: 7.2 per cent; CBS: 33 per cent): Flores is quietly leading the Mets in homers, including a grand salami on Saturday.

Eric Campbell, 3B, New York Mets (ESPN: 0.7 per cent; CBS: 1 per cent): Another Met we’re bullish on n (at least in NL-only leagues while David Wright is out) is Campbell, just brought back to the bigs from Triple-A last week. In two games since, he has four hits, three runs, two doubles, two RBI and a walk.

Delino DeShields, 2B/OF, Texas Rangers (ESPN: 22.4 per cent; CBS: 23 per cent): DeShields has forced his way into regular PT in Texas by hitting safely in seven of his last eight games, scoring plenty of runs, drawing walks and swiping bags.

Jace Peterson, 2B, Atlanta Braves (ESPN: 6.3 per cent: CBS: 12 per cent): Peterson has enjoyed multi-hit efforts in seven of the last 11 games while driving in six runs over the last two. Time to wake up to this talent.

Crave more in-depth Fantasy analysis? Then join us every Thursday at 9 p.m. EST for RotoRob Fantasy Baseball Weekly Podcast on Blogtalkradio as we entertain and edify you for an hour or more each week. Our guest this week will be RotoRob’s Vaney Hariri. Tune in here.

By Michael Seff
Tags: Eduardo Escobar
This entry was posted on Sunday, May 17th, 2015 at 11:23 pm and is filed under BASEBALL, Michael Seff, The Wire Troll. You can follow any responses to this entry through the RSS 2.0 feed. Both comments and pings are currently closed.