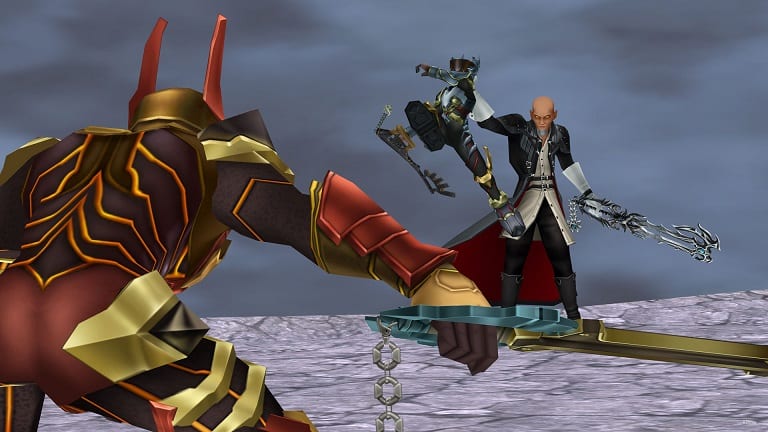 Birth by Sleep on the big screen? Hell… Yes…

On paper, combining the characters from Disney’s history with the cast of Square-Enix’s Final Fantasy series seems like a strange mix. Kingdom Hearts has proven that formula is capable of sustained success, however, with multiple entries over the past decade plus and a highly anticipated next-gen offering looming on the horizon. In preparation for that, Square has released Kingdom Hearts HD 2.5 ReMIX for the PlayStation 3.

There has been no shortage of HD remakes this year, but most of those have seen companies move PS3 or 360 titles to the PS4/XB1. So how does this one stack up? Let’s dust off the PS3 and find out.

Nowhere does KH 2.5 feel more dated than with its controls, both in terms of structure and execution. It starts with using circle to jump and “X” to attack, which feels counter intuitive after years of “X” being jump in just about every title. Will it prevent you from succeeding? No, but it still feels odd. The same holds true of the default camera movement, though that can be easily inverted from the configuration menu.

Speaking of the camera, it’s an unwieldy beast in Birth by Sleep no matter what settings you use. When fighting multiple foes, the lock-on function (R1) is unreliable and often seemed at odds with what we actually wanted. This led to enemies getting behind us for cheap hits, an issue that’s made worse by how cumbersome rotating the camera felt.

It’s always a delicate balance when updating games in regards to how faithful companies should stay to the source material, and while there’s nothing wrong here to the point that it’ll significantly hinder your ability to complete the games, some additional refinement could have helped.

Despite rather humble roots — one a PS2 game from 2005, the other a 2010 PSP title — both games look quite good in their high-definition glory on the PlayStation 3. Then again, the Final Fantasy series has long been at the forefront of visual excellence, so it shouldn’t come as a huge surprise. Its success on the graphical front has more to do with design and locations than power, however, and it’s pretty cool to visit the colourful Disney worlds — Tron, Pirates of the Caribbean, The Lion King and more.

Things are even stronger on the audio side with excellent voice acting from original characters, most notably Haley Joel Osment as Sora and a fun turn from Leonard Nimoy as Master Xehanort, and strong representations of the well-known Disney contingent as well. Stack an exhilarating soundtrack on top of that and you’ve got a superb effort. One bit of trivia for Karate Kid fans: Kingdom Hearts II features the final work of Pat Morita in the Mulan section.

Kingdom Hearts HD 2.5 ReMIX contains KH II Final Mix, released on the PlayStation 2, and Birth by Sleep Final Mix, which was created for the PlayStation Portable and is a prequel to the original. In addition, the cinematic scenes from Kingdom Hearts Re:coded are also included. From a content perspective, there’s a whole lot to sink your teeth into.

Even if you played both games when they came out, there’s still new content to be experienced as these Final Mix versions were previously only available in Japan. They feature additional cut scenes, enemies and weapons along with new mini-games.

If you’ve never played Kingdom Hearts II, be forewarned it takes a while to get going, so don’t throw in the towel if it feels like the prologue is dragging on and on. It gets better. A lot better. Roxas eventually gives way to Sora, who once again teams with Donald Duck and Goofy for their lengthy adventure through all kinds of familiar Disney locations. Four difficulty modes are available, which should help you find a suitable challenge level during the lengthy campaign, though the default setting is quite easy.

As good as KH II is, however, Birth by Sleep might be the best game in the series. Despite being a PSP game originally, it never feels technically inferior to its PS2 counterpart. More importantly, the prequel features the best, most coherent story in the series, dealing with more interesting themes and concentrating on a cast of original characters (Terra, Aqua and Ventus) along the way. If you’ve had trouble following the story arc of the two main entries, this helps clarify some of the lore.

There’s also a more nuanced combat system in place, replacing traditional MP meters with cooldown timers to employ your special attacks and the Dimension Link (D-Link), which allows players to switch in a new set of commands (attacks) based on characters they’ve encountered along the way. With each of the three protagonists getting their own storyline, which do intertwine with one another, it does a great job of keeping the action varied from start to finish.

Rounding out the package is Kingdom Hearts Re:coded, which culls all the cut scenes together from the 2011 Nintendo DS release of the same name and presents them over roughly three hours. Keeping in mind that Coded started as a mobile game before being ported to DS, it actually looks good, but it’s still pretty confusing and not an integral part of the overarching fiction. Unless you’re hell bent on squeezing every last ounce of content out of this collection you’re probably better served reading an online synopsis and spending your time elsewhere.

If you previously played the games and are looking to brush up in advance of Kingdom Hearts III, this is a great way to do it. If you’re new to the series or never owned a PlayStation Portable, Kingdom Hearts HD 2.5 ReMIX is an excellent way to experience it. In fact, Birth by Sleep is so good on the big screen that it’s worth the asking price all on its own.

By HC Green
Tags: Disney
This entry was posted on Friday, December 26th, 2014 at 12:35 am and is filed under Herija Green, Video Game Reviews. You can follow any responses to this entry through the RSS 2.0 feed. Both comments and pings are currently closed.