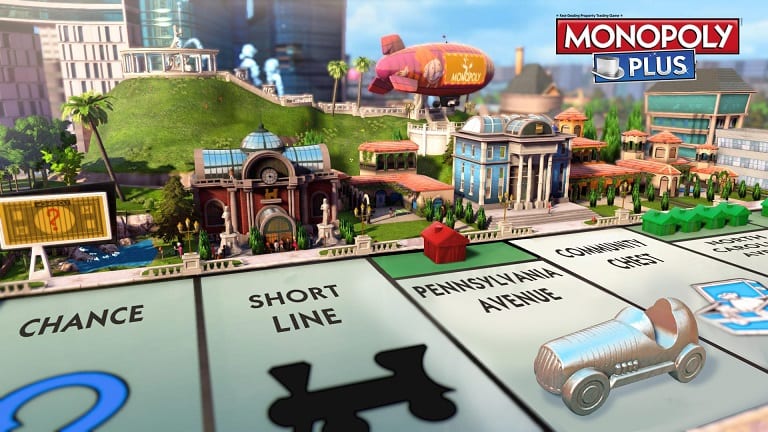 Controls are well laid out, responsive and easy understand. They’ll be intuitive for even the youngest gamers.

Graphics are a strong point for this game — the Ubisoft designers certainly know their way around a game board. Monopoly Plus has clean lines, clear focus and additional fun (slightly blurred) details in the background. The screen is constantly alive with interactive pop ups, player scores, a board map, details about properties, large dice to roll and the “living board” is full of colourful objects in motion.

As strong as the graphics are, they can’t overcome the repetitive nature of the soundtrack. In Monopoly Plus, the narrator’s voice is smooth as he guides your tokens around the board and presents choices in gameplay, but the bright pop music and constant canned cheers can get stale quickly. If you mute the volume and blast your own tunes while playing the game, not much would be lost and it might be more enjoyable.

In Monopoly Deal, the elevator music might just put you to sleep before you can complete a couple of rounds of actions with your mates. Once again, muting the music and playing your own might be a better option.

If you’ve ever played the board game Monopoly or have watched someone play it, this will be pretty easy to pick up. Players pick a token (classic tokens, plus a bunny flying on a fire extinguisher), roll the dice and move around the board.

The board is alive with the constant motion of a big metropolis. Trains are running on their tracks, subways move, a Ferris Wheel spins in the background and a roller coaster runs up and down the tracks. When you land on a property, details about it pop up on the screen. Buy the property or watch it be auctioned off. As you land on properties multiple times, watch the construction crews move in and cheer as you build houses or hotels.

If you’re more creative and want to customize your board, move over to My Monopoly. For the centre of the gameboard, press “Y” to select objects (stadium, donut shop, castle and about 50 more) and move them around your city. You can also flip the 3D board, slap an icon on the middle of it and name your graphic. On the outside rim of the board, where the properties sit, press “X” to edit the names and pictures of the squares. You can’t edit taxes, go to jail, free parking, community chest, chance, and go, but all the other spots will welcome your touch.

Like the social component of Xbox Live? Click on Monopoly Deal. Register for or use your Uplay account (loyalty rewards for Ubisoft gamers). Wait for at least two other players to join you, watch five cards get dealt, play an action card or a property card and try to get to three full colour sets (three collections of different properties) to win.

Between the cool jazz and the slow pace of the game, it’s kind of like playing your grandmother in Canasta. In fact, if you have some grands wanting to game with you online, this might be a pleasant way to spend the afternoon. Have a cup of tea, play the cards you’ve been dealt, and watch the minutes crawl by.

Monopoly Plus and My Monopoly are the winners in the Monopoly Family Fun Pack. No little pieces to lose, no arguments over who is going to be the banker, no worries about addition errors or miscounting spaces on the board. No need to find cardboard to colour in your own Monopoly squares. Just plug in and play. Watch with glee as young gamers turn into property barons. This game is sure to bring out the mini-Trumps in us all.

By Quinn Potter
Tags: Monopoly Family Fun Pack, Ubisoft, Uplay, Xbox Live
This entry was posted on Wednesday, December 10th, 2014 at 2:14 am and is filed under Quinn Potter, Video Game Reviews. You can follow any responses to this entry through the RSS 2.0 feed. Both comments and pings are currently closed.