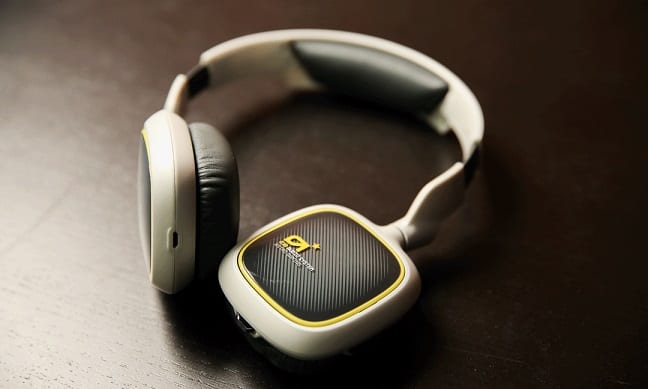 Although we’ve reviewed a number of headsets on RotoRob.com before, this is the first non-console unit we’ve ever taken for a spin. Released in September by ASTRO Gaming, the A38 Active Noise Cancelling Wireless Headset is designed for use with PCs, tablets, phones and pretty much anything else with Bluetooth capability (that includes the PlayStation Vita). Retailing for US$230, it’s not cheap. Now let’s find out if it’s worth the money.

Outside of a small strip containing a breakdown of the buttons and how to do its base functions — turning the power on/off and pairing — you’ll find no instruction manual. You’ll need to retrieve that online, but a second insert card notes all relevant links. Beyond that, the only things in the box are the headphones, a charging cable (USB to micro USB) and a carrying case.

While sturdy, the case is quite large, making it a bit of a nuisance to carry around with you. It’s designed to have the headphones sit in there and then have the ear cups rotate sideways to flatten out for storage. You’ll sacrifice some portability and convenience for the protection, but we’d think most would make that tradeoff any day of the week.

Actually pairing the A38s with devices is easy and reliable. You simply set the host device to scan for Bluetooth and then hold down the power button until the LED alternates blue and red. Within a few seconds the two should synch up and you’re ready to go.

Unlike other headphones we’ve reviewed, the A38 is an on-ear set. Despite that, the generous amount of padding and lightweight design makes them very comfortable, even during longer sessions. The faux leather is easy to wipe clean of any sweat that may accumulate throughout the day, and, in terms of fit, the A38s remain securely in place without feeling tight.

In addition to their comfort, the A38s also feature a streamlined set of buttons that make it very easy to make adjustments on the go without accidentally messing things up. They feature a sleek design and, though large for a Bluetooth headset, aren’t garish in any way. For those that want to personalize their set, ASTRO sells custom tags through its website — they’re magnetic and easily interchangeable.

ASTRO touts 20-plus hours of battery life for audio use (15-plus for talk), and it seems legit. We wore these for films, gaming sessions and in traffic for nearly two weeks and never needed to recharge them, so they should handle most trips. They recharge via the included micro USB cable.

Unfortunately, the A38s will not connect to your consoles, which means that anyone searching for a truly all-in-one solution for their gaming needs won’t find it here. As noted, they will pair with the Vita, but these aren’t made for the PlayStation 4/Xbox One crowd.

Probably the most interesting aspect of the A38s is the active noise-cancelling effect, which does a truly impressive job of drowning out surrounding sounds considering the on-ear design — okay, so maybe “cancelling” is too strong a word, but they certainly reduce ambient noise significantly.

As far as drawbacks go, the A38s do have them. Bluetooth, while simple to set up, can run into its fair share of distortion based on where your device is located. It’s sharp with your PC or when holding a device to watch/play, but if it’s tucked away for music it can encounter some chop. It’s not great as an extension of your telephone, either, with distant-sounding voices and a merely serviceable mic.

There’s a lot to like about the A38 Active Noise Cancelling Wireless Headset — it’s stylish, comfortable, versatile, easy to set up, holds a long charge, etc. — but at US$230 you’re paying for every bit of that, and it’s inability to work with consoles is a blow to gamers looking for a singular headset for home and on the go. If your focus is on music and mobile media, it’s worth the buy in. If not, you’re better off purchasing another unit and suffering the wires.

By HC Green
Tags: A38 Headset, ASTRO Gaming, PlayStation Vita
This entry was posted on Thursday, October 16th, 2014 at 3:09 am and is filed under Herija Green, Product reviews. You can follow any responses to this entry through the RSS 2.0 feed. Both comments and pings are currently closed.