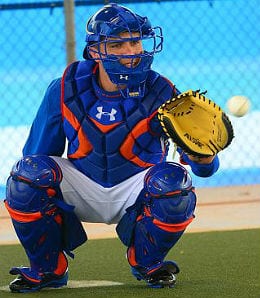 As we do annually, it’s time to honour the “bargain-basement” studs of the 2014 Fantasy baseball season. We now present you the 2014 RotoRob Wire Troll MLB All-Star Team. Chances are that if you plucked a few of these guys off your league wire, you enjoyed a fine campaign.

Travis d’Arnaud, New York Mets: d’Arnaud, a top 20 prospect heading into the season in our Top 65 Prospects rankings, has emerged in the second half, with seven home runs since the All-Star break, and it’s fair to assume he will improve upon his solid season in 2015. He has a fine 714 OPS thanks to 22 doubles to go along with his 13 dingers. d’Arnaud is only 25, so the future looks bright for the one-time Blue Jays prospect who has flashed some pretty beautiful glovework as well (see video below).

Lucas Duda, New York Mets: This must be a good omen for the Amazins’. Duda (a.k.a. The Big Lebowski) has developed into quite the power threat, with 28 bombs so far, giving him a legitimate shot at 30. He has gone deep 13 times since the All-Star break and boasts an 854 OPS in the month of September.

Dee Gordon, Los Angeles Dodgers: Gordon appeared in our first Wire Troll of the season, so those of you that were smart enough to grab him early sure reaped the rewards. The son of Flash has been tormenting the opposition all year with his speed and knack for the big hit. He currently leads the Majors with 63 stolen bases and 12 triples.

Lonnie Chisenhall, Cleveland Indians: Third base may have been the toughest call for us to make. Chisenhall had a monster game on June 9 at Texas, belting three home runs and driving in nine runs to announce his presence as a Fantasy commodity. He has become a consistent power threat, with 13 homers and 59 RBI to go along with a 784 OPS so far this season.

Jordy Mercer, Pittsburgh Pirates: This was a much shallower pool to choose from. Still, Mercer has been a nice surprise for Pittsburgh, with 11 homers and 53 RBI.

J.D. Martinez, Detroit Tigers: Martinez has been as clutch as he has productive, as the former Astro is batting .319 (.327 with runners on base) with 23 homers and 76 RBI. That’s just one homer shy of his 252-game total during his three-year tenure in Houston.

Steve Pearce, Baltimore Orioles: We kind of cheated here as Pearce has seen consistent playing time at first base after the suspension of Chris Davis, but he alos saw plenty of games in left field while proving his worth. Pearce now has 20 homers and is one of the Orioles’ offensive centrepieces moving towards the postseason.

Charlie Blackmon, Colorado Rockies: We essentially had to pick between two deserving Rockies, with Blackmon getting the nod over teammate Corey Dickerson. Blackmon, Colorado’s leadoff man, has 18 homers, 71 RBI, 28 stolen bases and an OPS of 765. Most of his damage has been done at Coors Field, but you don’t hear any Fantasy owners complaining.

Scott Kazmir, Oakland Athletics: So you thought Kazmir was done, did you? Though he’s struggled of late, the one-time wave of the future for Tampa Bay is 14-9 with a 3.44 ERA for Oakland. Sure, the A’s wanted reinforcements for their playoff run, but Kazmir is as important as anyone to their playoff prospects.

Matt Shoemaker, Los Angeles Angels: Where in the heck did Shoemaker come from? Angels fans couldn’t care less, because the 27-year-old rookie has a Major League-leading .800 win percentage with a 16-4 mark. His 3.04 ERA isn’t too shabby, either.

Edinson Volquez, Pittsburgh Pirates: No one could have envisioned the journeyman Volquez as perhaps the Pirates’ most dependable pitcher, but here is the former All-Star, 12-7 with a 3.27 ERA and 124 strikeouts in 178 2/3 innings. For that, we will forgive his league-leading 15 wild pitches.

Collin McHugh, Houston Astros: Shoemaker isn’t the only AL West rookie hurler glowing in 2014. McHugh may be even better, although his mediocre 10-9 record is merely a product of playing for Houston. He has a 2.66 ERA, which, when you consider he pitches his home games at Minute Maid Park, could equate to Clayton Kershaw-esque success. McHugh has been a K machine, with 151 in 148 2/3 innings.

Mike Fiers, Milwaukee Brewers: Here’s hoping Fiers’ 2014 campaign isn’t remembered solely for his involvement in the end of Giancarlo Stanton’s season. Fiers has made just 12 starts, but virtually every one has been dominant. He is 6-3 with a 1.78 ERA and 66 strikeouts in 60 2/3 innings. Fiers also sports an other-wordly 0.84 WHIP.

Dellin Betances, New York Yankees: Betances has already set a Yankees franchise mark with 132 strikeouts out of the bullpen, and he may only be getting better. The 6’8” righty is an intimidating presence on the mound and his season for the ages includes a 5-0 record and 1.33 ERA in 68 games. Oh yeah, and those aforementioned Ks were accumulated in just 88 innings. He’s not Mariano Rivera 2.0 yet, but some have wondered if he might be soon.

Pat Neshek, St. Louis Cardinals: You are probably saying what every batter in Major League Baseball must be thinking: how can a guy who throws like that be so effective? The unorthodox Neshek has been the National League’s best setup man and may be worthy of some opportunities to close given the recent struggles of Trevor Rosenthal. Neshek earned an All-Star nod in his home state of Minnesota and is 7-1 with a 1.39 ERA over 69 appearances this season.

Now it’s your time. Let us know in the comments below who your favourite waiver wire pickups of the season were.

By Michael Seff
This entry was posted on Sunday, September 21st, 2014 at 8:20 pm and is filed under BASEBALL, Michael Seff, The Wire Troll. You can follow any responses to this entry through the RSS 2.0 feed. You can skip to the end and leave a response. Pinging is currently not allowed.