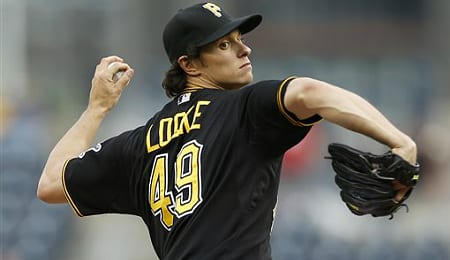 Fantasy owners are figuring out that Jeff Locke is a solid pickup. (H4-entertainment.com)

Each week in Diamond Stocks, we will examine five players whose Fantasy stock is on the up-and-up and five players headed in the opposite direction.

Jeff Locke, SP, Pittsburgh Pirates: We would imagine that Locke’s 12 per cent ESPN ownership (up 8.4 percentage points in the last week) will continue to spike, as will his 46 per cent CBS ownership. Five straight quality starts (including one against Arizona last week — see video below) is no accident, and Locke was stellar again on Sunday in holding the Phillies to two runs (one earned) over eight innings in a 6-2 win. The southpaw has issued just six walks in 49 2/3 innings pitched, striking out 30.

Mike Moustakas, 3B, Kansas City Royals: It’s not often we showcase a player hitting below the Mendoza Line, but the Moose appears to have loosened up lately. In the ESPN world, Moustakas gets no respect (5.8 per cent ownership), although CBS owners have been more loyal (34 per cent). He’s 7-for-17 (.412) in his last five games with a pair of homers of and six RBI, and though he’s only batting .195 overall, that’s 50 points higher than where he was at exactly one month ago. Moustakas has 10 homers and 35 RBI on the season.

Yasmani Grandal, C, San Diego Padres: Grandal is owned in only 11 per cent of CBS leagues and is almost completely unowned (0.1 per cent) in the ESPN universe, but he’s 5-for-14 (.357) in July and clubbed a two-run homer Sunday, continuing an upward trend for him. Though he’s hitting just .206, he’s raised his batting average 20 points since June 21, and still has managed to post a respectable 674 OPS for the season.

Danny Duffy, SP, Kansas City Royals: Duffy isn’t flying under the radar in CBS leagues (63 per cent), but ESPN owners are just now taking notice (33.4 per cent, up 21.4 percentage points in the last week). He had an inauspicious start on Sunday but was coming off a June in which he went 3-2 with a 1.69 ERA, allowing just 22 hits in 37 1/3 innings pitched.

James Loney, 1B, Tampa Bay Rays: Like Duffy, Loney isn’t going unnoticed in the CBS spectrum (55 per cent), yet ESPN players might want to jump on board (30.8 per cent). We’ll stop short of calling Loney a singles machine, as he has two homers since June 27, but extra base hits are hard to come by for the former Dodger. J-Lo went 3-for-5 Sunday for his seventh multi-hit game since June 19, taking his season BA up to .278.

Josh Donaldson, 3B, Oakland Athletics: Donaldson, who is universally owned across the board, may be an All-Star, but he’s just 3-for-24 (.143) since June 29. To boot, he has only one long ball since June 20. His .241 season average is dwarfed somewhat by his 19 homers, 62 RBI and 778 OPS, but he hasn’t exactly been getting straight A’s lately at the plate.

Bryce Harper, LF, Washington Nationals: Harper, owned by everyone except one per cent of the CBS world, was dropped to sixth in the Nats’ batting order and is just 4-for-21 (.190) since his return from the DL. In 28 games this season, he’s hitting .269 with one homer and 10 RBI.

Adam Eaton, CF, Chicago White Sox: Eaton is struggling at the plate lately, going just 4-for-27 (.148) over his last seven games, and ESPN Fantasy owners have taken notice (51.6 per cent, down 5.7 percentage points). He is still owned in 71 per cent of CBS leagues, but he has just one RBI since June 25 and his OBP has dropped 12 points in that span.

Dan Haren, SP, Los Angeles Dodgers: Haren is owned at a 95.3 per cent clip in the ESPN world and 84 per cent in CBS leagues, but his rocky outing in Colorado on Saturday was his second such in three outings. He got shelled to the tune of eight earned runs in 5 1/3 innings, and now has a 5.40 ERA since the beginning of June. Haren has fanned only 77 batters in 108 2/3 innings this season, as his K rate has plummeted over 1.6/9 from 2013.

Jason Heyward, RF, Atlanta Braves: Heyward is 5-for-38 (.132) since June 25 despite being owned by everyone in the ESPN spectrum and 97 per cent of the CBS world. Worse yet, his last home run came on June 15. Heyward is batting just .242 for the season with eight homers and 32 RBI.

Now it’s your turn. Let us know in the comments below who you see gaining in Fantasy value and who’s sliding.

Crave more in-depth Fantasy analysis? Then join us every Thursday at 9 p.m. EST for RotoRob Fantasy Baseball Weekly Podcast on Blogtalkradio as we entertain and edify you for an hour or more each week. This week, RotoRob is joined by Joel Henard of the Fantasy Insiders. Tune in here.

By Michael Seff
Tags: Jeff Locke
This entry was posted on Monday, July 7th, 2014 at 8:26 pm and is filed under BASEBALL, Diamond Stocks, Michael Seff. You can follow any responses to this entry through the RSS 2.0 feed. You can skip to the end and leave a response. Pinging is currently not allowed.