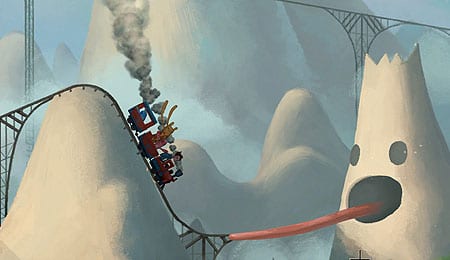 Now who thought this was a good idea?

It’s safe to say that Broken Age is a game that has a lot to live up to. Not only is it the poster child for Kickstarter campaigns, but it’s also attempting to prove that point-and-click adventure games still have an audience. While the game is nothing revolutionary, we can happily say that it is a success in both regards. The funds raised have been put to good use, and the game is a fantastic throwback to the genre. In fact, we would say that Broken Age is Double Fine’s best game since Psychonauts.

Broken Age employs a very traditional point-and-click interface. Click where you want to move to, who you want to speak to, or what item you want to pick up. Dragging items in your possession to a certain spot allows you to use the item, and dragging one item toward another allows you to combine them. The only issue we had was that the item bar had to be opened by putting the mouse towards the bottom left corner of the screen, which got a little tedious. We would have preferred an option to keep it there permanently.

Visually, Broken Age has a fantastic art style, which is perfectly complimented by its graphical prowess. The only reason we’d never confuse the game with a cartoon is because this is the kind of artistic direction that would only be attempted in a video game. A movie would make it stop motion or computer generated, while on television it would employ a more cartoony feel. Don’t think that means there is anything inferior about its art style, though. Quite the contrary — Broken Age contains all the same visual charm that Psychonauts had without any of its downsides.

The game’s voice acting is equally fantastic. Talented actors such as Elijah Wood, Wil Wheaton and Jack Black (among others) lend their talents to deliver dialogue with the quality expected from a movie rather than a video game. The writing is extremely witty, matching the talent involved in this project. Combine that with two very strong parallel stories, and you’ve got what we am sure will be one of the most delightful video game stories this year.

Unquestionably, Broken Age is a game that places more importance on story than gameplay. This is to be expected from a point-and-click adventure, but there are still a few noticeable flaws. The most apparent of which comes from a very common issue with point-and-click titles — the solution to the puzzle is easier solved through guesswork rather than piecing the clues together.

These instances are infrequent, but they are noticeable and drag on when they appear as they force traveling to every accessible area to try every possible solution. Ultimately, these just make the game feel longer. On the other end of the spectrum, many of the other puzzles are too easy, leaving little middle ground for puzzles that are neither obvious nor vague.

Fortunately, the story is compelling enough to make these flaws easily overlooked. Well, more like stories as there are two parallel ones you are free to switch between. One focuses on a character voiced by Wood, who goes on what he is told will be exciting missions in space only to encounter scenarios ripped out straight from a preschool cartoon.

The other story arc surrounds a girl that is supposed to be sacrificed to an evil creature, only she decides to find a way to defeat it instead. Both are very smartly written, offering two coming of age tales that tackle different issues, yet they offer their own similarities.

Broken Age is nothing revolutionary. It is merely a fun callback to the PC point-and-click adventure games of the ’90s. Anyone that was a fan of those will certainly enjoy Broken Age, as will fans of Double Fine.

By Casey Curran
This entry was posted on Wednesday, January 29th, 2014 at 6:16 pm and is filed under Casey Curran, Video Game Reviews. You can follow any responses to this entry through the RSS 2.0 feed. You can skip to the end and leave a response. Pinging is currently not allowed.