Video Game Review: The Wolf Among Us, Episode 1 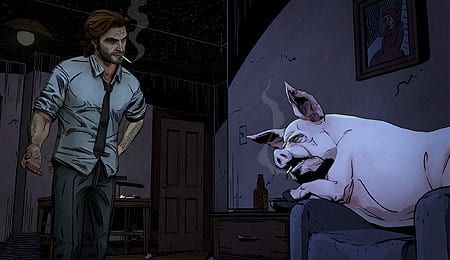 Telltale delivers visuals that look like a comic book come to life.

For years, Telltale Games was a bit of a niche developer that brought adventure games into a modern economic model while exposing the genre to mobile and console platforms. With old-school favourites like Monkey Island and Sam & Max in Telltale’s care, the company had a dedicated niche audience.

Then a little game called The Walking Dead came out, and suddenly Telltale went from being adventure developers to new trailblazers in interactive storytelling. The Wolf Among Us, based on the popular Fables graphic novel, is Telltale’s first post-TWD title and it’s built on the same foundation of storytelling and comic book visuals. Episode 1, entitled Faith, brings us into a different kind of bleak landscape from Robert Kirkman’s zombie apocalypse. The Wolf Among Us has a simple premise: characters from fables were exiled from their native storyland and placed into the gritty realism of New York.

If The Wolf Among Us isn’t built on the same engine as The Walking Dead, it’s at least very similar. The controls are essentially the same with face buttons providing dialog options under a timer (silence is also an option). General movement is handled by the left analog stick while the right analog maneuvers a cursor around for other interaction options (look, interact and open).

Action events are driven by QuickTime-style inputs. There’s movement involved here (analog pushes based on on-screen icons), and in some cases, you’ll be prompted to move the cursor over a certain area before pressing a button. Some of these moments are ill-conceived, as the camera cuts so fast or moves in a shaky manner such that it’s hard to see where you actually have to put it. Other times, it feels like there are no consequences as seemingly any button works as well as the designated button.

Similar to its predecessor, The Wolf Among Us emulates the look of an interactive comic book. And while The Walking Dead’s backgrounds focused on grim atmospherics, The Wolf Among Us is all about a gritty pulp feel. Bright colours stand out starkly against shadowed backgrounds, creating a true comic book look while building a noir feel. The animations seem more refined from Telltale’s previous work, and we didn’t notice any problems with pop-in or texturing.

Most of the voice cast is excellent, bringing a grounded reality to this fantastical world. In particular, Bigby (the lead and player character) gives a stellar performance while the cantankerous Toad is probably the most memorable of the supporting cast. The only character that seemed uneven was Snow White. We couldn’t tell if it was the performance or the editing, but she kept seeming to take pauses at odd times, and not in a cool Christopher Walken type of way.

The Wolf Among Us is a story-driven adventure with much of the game unfolding through dialog. As a result, most of the game’s interactions take place through dialog choices and exploration. Any plot details would fall into spoiler territory, so we’ll avoid going there outside of the main setup: as the former Big Bad Wolf, Bigby (Big B.) is the Sheriff among the existing Fables, trying to keep order among a cast of characters that have to hide their native origins. If anyone steps out of line, reveals themselves to the outside world, or just causes chaos, Bigby is the reluctant enforcer who has to take charge.

It’s an immersive, interesting world with a story that quickly grips you and sucks you in. The episode’s ending is a doozy, and you’ll be either sitting slackjawed at the screen or screaming at it — either way, Episode 2 can’t come quickly enough.

As far as we can tell, the game’s branching narrative is based more on more nuanced items — mostly character attitudes towards Bigby. There’s one major decision that creates a ripple effect throughout the rest of the episode (and we’re assuming, the rest of the game), but there does seem to be a pretty consistent A-to-B throughline — the journey itself is what changes. This opens the door for replay value, but for anyone expecting an extremely drastic difference a la Heavy Rain, you’ll be disappointed.

The Wolf Among Us is a stellar follow-up from Telltale Games. Some technical issues show that it still hasn’t mastered action sequences, but with story and characters as strong as this, those can easily be overlooked.

By Mike Chen
Tags: Telltale Games
This entry was posted on Saturday, October 26th, 2013 at 4:30 pm and is filed under Mike Chen, Video Game Reviews. You can follow any responses to this entry through the RSS 2.0 feed. Both comments and pings are currently closed.