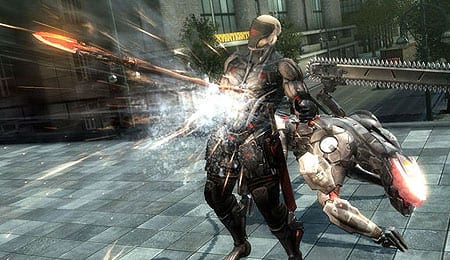 Grey Wind and Ghost have nothing on Blade Wolf.

Traditionally here at RotoRob.com, any and all Metal Gear reviews are handled by the illustrious Mike Chen, whose knowledge of the lore borders on the supernatural. This time, however, I’m calling an audible and tackling the recent DLC releases for Metal Gear Rising: Revengeance personally. As these two episodes have been out for a while and were recently bundled with the Ultimate Edition of MGR, we’re rolling them into one review.

Released in April, Jetstream serves as a prequel to the events of the full game, putting you in the cybernetic shoes of one of the main antagonists, Jetstream Sam. The story clues you in on how Sam came to be in the employ of Senator Armstrong and Desperado Enforcement, but even with a handful of cut scenes involving other characters from the game, it’s safe to say the thin narrative isn’t much of a selling point.

That leaves the action to do the heavy lifting, and although Sam does possess some unique abilities there isn’t a whole lot of difference in playing the game as him versus Raiden. And that feeling of sameness carries over to the enemies you do battle with and even the DLC’s location as well. All of which means that if you enjoyed the core combat experience of Revengeance you’ll enjoy this, too. Conversely, if you were hoping for Konami to vary the formula there’s nothing here to sate that appetite.

Jetstream is a mostly linear experience, and on the default difficultly setting it took roughly 90 minutes to roll the credits. There are some VR missions available to add a little more meat, but they can only played by activating them within the story itself. They’re not overly compelling, either, as four of the five are very straightforward “kill all enemies” stuff. Sprinkle in a handful of data collectibles to locate and you’ve seen the DLC’s entirety.

Konami’s second major piece of DLC, dropped in mid-May, is Blade Wolf. It’s similar to Jetstream in that it reuses environments and enemies liberally, but what sets this one apart is that instead of a Raiden-esque main character you get to play as Blade Wolf LQ-84i, a sentient robotic wolf that moves differently and sports a mean ass chainsaw.

Once again, the story revolves around Desperado — this time featuring Mistral, who is essentially Blade Wolf’s handler. In that capacity she works out the kinks through a series of VR missions before turning it loose in a live combat scenario. Blade Wolf longs for freedom, though, and is intent on escaping Mistral’s influence. There is also a new villain (the forgettable Khamsin) that provides the DLC with a fresh boss battle.

What makes Blade Wolf stand out over the previous DLC is the implementation of stealth. Sure, you could sneak around some with Raiden in the main game, but it here feels more natural — and more satisfying. Still, even taking a deliberate approach won’t stretch the game much beyond the one-hour mark — and unlike Jetstream, there is no additional content. You play through the linear levels, kill enemies, take down a boss and you’re done.

While both add-ons are enjoyable for fans of Revengeance, they’re a bit lean on bang for your buck. If funds are tight I’d say give Blade Wolf a go first — it’s more interesting and checks in as the cheaper of the two. Conversely, if that’s not an issue go ahead and download them both for a couple extra hours of MGR goodness.

By Herija Green
This entry was posted on Thursday, June 6th, 2013 at 12:05 pm and is filed under Herija Green, Video Game Reviews. You can follow any responses to this entry through the RSS 2.0 feed. You can skip to the end and leave a response. Pinging is currently not allowed.