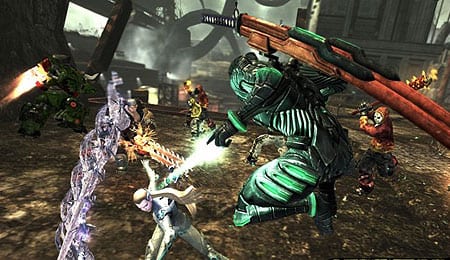 Regardless of your opinion of the Wii, it was pretty clear that MadWorld suffered from its place on the console. The tacked-on motion controls and lack of online co-op made me wish for a sequel or follow up on the PlayStation 3 or Xbox 360 360 which removed these limitations. Which brings us to Anarchy Reigns. MadWorld’s spiritual successor not only improves on the last game’s flaws, but it brings a wealth of new ideas to the beat ’em up genre to make something fresh… though far from perfect.

Anarchy Reigns has very simple controls that work fairly well. Light and heavy attacks can be alternated to make combos, and there’s the ability to grab enemies and objects to toss around. There is also a very situational lock-on mechanic that is only useful when fighting a single, more powerful enemy. These all work fairly well with a decent amount of polish.

There are two issues, however, which do not cripple the game but often get in the way. First is the camera, which in more cramped areas will lose all control. It doesn’t happen often, but it gets annoying when it does. The other is the dodge mechanic. This is executed by holding down the block button and pressing jump along with moving in the desired direction. Considering the fast-paced nature of the game, this is often too slow with too many steps. A God of War-style dodge mechanic would have fared better.

Graphically, it is easy to tell why this game checks in at US$30. Many of the PS2/Xbox HD collections look better than this. Despite that, the nice art style and use of colours keeps it from feeling like an ugly game. There is a lot of style to the game’s look from enemy animations to the excessive amounts of crazy gore that make it fun, though unimpressive, visually.

Conversely, the music is great. Its crazy nature matches the game’s tone perfectly. The sound effects also capture the nature of the over-the-top violence, adding to the game’s fantastic style — something Platinum Games has always done well.

The gameplay is very similar to arcade beat ’em ups done in 3D. There is little else to do but throttle enemies, yet this never felt like a problem as there was always a good variety of enemies to fight. Defeating enemies is done by pulling off a simple combo on them, with other options like grabbing them and throwing objects that explode or set them ablaze.

Vehicles are also scattered throughout the area. Using these are a pure joy as they not only add a very fun feeling of power, but they have a very over-the-top feel as well. Helicopters, for instance, are controlled by grabbing onto their rail. Slamming against its hull fires rockets, and it allows you to slam the aircraft into the ground when you’re done with it. The over-the-top nature creates a game that, while simple, is an absolute blast to play.

Story mode takes place in a variety of moderately-sized open worlds. This allows the game’s approach to combat feel a bit similar to Batman: Arkham City’s in that it offers its own missions, but if you just feel like beating a bunch of enemies it lets you do that as well.

However, despite the large character roster, you can only use two characters most of the time in this story mode, occasionally offering an alternate character for a main mission. This is done to offer a focused story, which is typical Platinum Games fare: nothing good to watch except a moment or two of fun craziness. This is made worse with unskippable cut scenes that often go on way too long and make the action lose its flow.

The real meat of the gameplay surprisingly comes from its multiplayer mode. The number of characters is comparable to a fighting game, which is great because it feels like a cross between Smash Bros and Call of Duty of all things. The modes feel more like something found in an FPS like survival and capture the flag.

The actual gameplay, however, captures Smash Bros’ chaotic feel. In fact, if you wondered what Smash Bros would be like in 3D with a more common health system, Anarchy Reigns would be the super violent version of it. If you’re looking for a different multiplayer experience with a robust amount of options, Anarchy Reigns is definitely worth a look.

Despite its flaws, Anarchy Reigns is a good game and I strongly recommend it to anyone that either enjoyed MadWorld or felt it was held back by the Wiimote controls. While the gameplay itself is fun, it is the fresh ideas to the genre and overall style that make Anarchy Reigns worth checking out, especially at its US$30 price tag.

By Casey Curran
This entry was posted on Monday, January 21st, 2013 at 3:10 pm and is filed under Casey Curran, Video Game Reviews. You can follow any responses to this entry through the RSS 2.0 feed. Both comments and pings are currently closed.