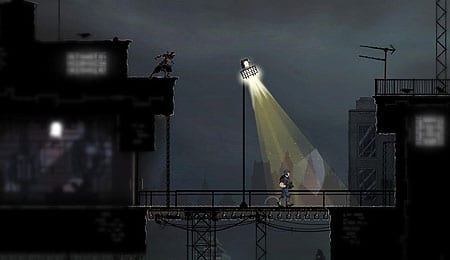 How can I kill thee? Let me count the ways.

As a man, there are certain things hardwired into my DNA. Buried amidst the love of action films, timeless humour found in another man being struck in the nards, and absolute knowledge that any female claiming to be uninterested in me is either lying or playing for the wrong team, is this one basic fact: Ninjas are cool. Developer Klei Entertainment understands this, and its brand new Xbox Live Arcade title, Mark of the Ninja, seeks to remind us of just how cool they can be.

Although each of the face buttons serves a primary function, some change contextually based on where you’re positioned or which direction you’re pushing the left stick. For example, the “A” button jumps; but it’s also used to enter doorways, transition from one section of wall to another, drop from elevated points and more. With so many functions mapped to one button there are instances where you’ll do things such as jump off instead of climb to a surface. Still, while it’s frustrating during those moments, for the vast majority of time it comes together extremely well.

Perhaps the high point for the controls is the ability to essentially freeze time via the left trigger. Doing this focuses your attention and allows you to target multiple enemies (or objects) at once for quick dart tosses, grapple to hard-to-reach spots or toss items to distract/incapacitate your foes. Selecting your items is easily done with the d-pad, and the right analog stick allows you to move the camera to check your surroundings without having to rush in.

While the gameplay represents a significant departure from the Shank series, Mark of the Ninja does feature the same cel-shaded art style and angular character features. The cut scenes in particular look as though they could’ve been culled from the cutting room floor of Shank 2. It’s an approach I happen to like, and it plays to the source material quite nicely here. Movement is fluid and slick, and the overly busy sections that undermined Shank are nowhere to be found this time. I would’ve enjoyed seeing a greater variety of assassinations, but that’s just me being greedy.

Voice acting is surprisingly good here — not that there’s a ton of dialogue or anything, but what’s present is capably handled. The game’s score is subdued and properly fits its stealth-oriented theme while the sound effects are well done.

Some high-tech baddies have taken it upon themselves to attack your clan, and much like tugging on Superman’s cape, spitting into the wind and pulling the mask off that old Lone Ranger, picking a fight with a bunch of ninjas is something you just don’t do. In this case, though, it falls on just one member of the clan to fight back. Given special tattoos that grant exceptional abilities, this ninja exacts a terrible retribution on his enemies. That ninja is you.

There’s a catch, however — these tattoos slowly drive the user insane. Thus, the cost of this power is that he must do the honourable thing and kill himself before descending into a world of hallucinations and madness. It’s an interesting twist on a tried-and-true revenge story even if many will likely pay little attention to the why and focus squarely on the how.

Unquestionably, Mark of the Ninja is designed around stealth. Your default movement speed is a very deliberate, silent walk, and your sword is exclusively brandished during assassinations — which can only be triggered when your target is unaware or dazed. This is not hack ‘n’ slash where you find yourself facing a half-dozen enemies at once or battling hand to hand. Your foes carry guns, your health is limited, and caution is paramount.

Levels feature all sorts of hidden tunnels and passageways to allow you to gain the upper hand on patrolling guards or even circumvent them all together. You’ll utilize the environment to draw their attention away, set spike traps for easy kills or even display dead bodies to terrorize them. A lot of thought went into giving you a variety of ways to deal with enemies and situations, and the result is a game that stays fresh from beginning to end.

While the game is full of moments when you’ll delight in setting up enemies for elaborate kills, there are also times when the A.I. can get in the way. Foes can alternatively be clairvoyant and completely oblivious, spotting you when it seems impossible one minute and standing a few feet away while you murder another guard standing right in front of them the next. As good as the game is, occasional frustration is a given here.

Each of the 12 levels features a set of challenges consisting of three hidden scrolls, three objectives (such as traversing a building without being spotted or stuffing X number of guards into dumpsters) and three point thresholds. Complete a challenge and you’ll earn a medal, which is then used as an in-game currency to upgrade your character with things like additional armour, new items, and, of course, a number of different assassinations. Odds are you don’t need to be told this, but definitely unlock those first as they allow you to kill from a number of different positions in relation to your victim.

Mark of the Ninja contains only the campaign mode, but don’t let that fool you into thinking there’s a lack of content. This is a lengthy game. I easily sunk eight-plus hours into it, and even someone who’s less of a perfectionist should still end up with north of six. Completing the game also unlocks a “New Game Plus” mode that allows you to keep all your upgrades and simultaneously ups the difficulty.

Striking an excellent balance between the ability to avoid combat and engage in it, Mark of the Ninja is a godsend for those that have been looking for a stealth-based adventure to sink their teeth into. Add this to the growing list of excellent downloadable games in 2012.

By Herija Green
This entry was posted on Friday, September 7th, 2012 at 11:25 am and is filed under Herija Green, Video Game Reviews. You can follow any responses to this entry through the RSS 2.0 feed. Both comments and pings are currently closed.