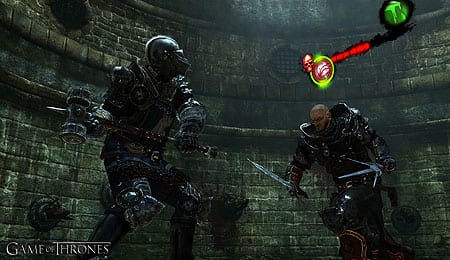 When you play the Game of Thrones you win or you die.

In development long before the HBO series turned George R. R. Martin’s A Song of Fire and Ice into a cultural phenomenon, Cyanide Studio’s Game of Thrones is hardly the big budget extravaganza one might expect given its current popularity. The game’s technical shortcomings are evident from the start, but that doesn’t mean there aren’t some redeeming qualities to be found.

With few exceptions you’ll spend the game’s duration commanding a two-person party, toggling between them with the push of a button. Each of the two primary characters has a special ability to use outside of combat — Mors Westford can inhabit the psyche of his dog, and Alester Sarwyck can channel flame to locate hidden objects. Alester’s ability is straightforward, but you can control Mors’ dog directly to unearth loot, follow scent trails and even kill unsuspecting foes.

Combat is based on under-the-hood dice rolls where attacks can be queued up and success is based on offensive and defensive skills. Once again you can switch freely between party members and pressing the bumper slows time dramatically. Pressing the bumper also brings up an ability wheel that allows you to select your attacks. Targets can be cycled through with the d-pad. It’s a decent setup.

There’s no real way to spin the visuals in Game of Thrones. They’re ugly… real ugly. During cut scenes, characters rock back and forth between the same couple of poses, lip synching is poor and faces are recycled liberally among the non-essential characters. In combat they at least move fluidly, and there are some cool scripted executions (when they load properly), but the clash and impact of blows is non-existent with liberal amounts of clipping. And Mors’ dog looks about as realistic as those gargoyles that come to life in Ghostbusters.

Perhaps more disappointing is the world of Westeros. It’s not that the environments look bad (they’re at least passable), it’s that there is no sense of scale in what is supposed to be a massive land. Areas are entirely self-contained pathways with little room for exploration, which effectively reduces a grand setting like King’s Landing into a handful of buildings amid some winding streets. Travel from one place to another is handled with a map and a loading screen. Ultimately, these claustrophobic areas reduce Westeros into a collection of spots with no tangible connection to one another and that’s unfortunate.

Voice acting runs the gamut here. Many of the main characters are well done — Mors and Valarr in particular — and fans of the HBO series will recognize the voices (and likenesses) of Varys and Jeor Mormont. Where Game of Thrones runs into trouble is with peripheral players, especially when it comes to conveying emotions. Too often the tenor is completely off, undermining the impact of the game’s biggest strength — its story. There are also scattered audio mixing troubles where some scenes are nearly impossible to hear. The score, which does feature the HBO theme, is unremarkable.

Written in conjunction with Martin, Game of Thrones tells a secondary story that leads up to and then runs parallel with the events of the first book. Knowledge of the book isn’t necessary to play, but you’ll definitely get a much richer experience if you’re familiar with the key figures. Here you’ll assume the dual roles of the aforementioned Mors Westford, a sworn brother of the Night’s Watch, and Alester Sarwyck, a red priest returning from self-imposed exile to pay his final respects to his father.

It starts slow but builds nicely over its 14 main chapters. Clearly, striking the same chord as the source material was important here, and it is done quite well as Westeros is a vicious, dangerous place filled with nefarious people — most of whom carry their own agenda. Murder, corruption and betrayal are commonplace, and they’re all handled maturely. These aren’t simple black and white characters; everyone is a shade of gray, and most of them trend toward the darker side of the palette.

With a run time of 25-plus hours there’s ample time to develop back stories and motives, and to the game’s credit none of the interesting twists later on feel forced. Unfortunately, the early chapters are so story intensive at the expense of the action that some may throw in the towel before things really pick up steam in both areas. Patience and a willingness to be immersed in the layers of the story are required to enjoy Game of Thrones — and it’s important to know that going in.

Fans of the television series might also be disappointed to learn that even in this lengthy endeavor you’ll encounter precious few recognizable characters. Sure, you’ll hear the names of Robert Baratheon, Tywin Lannister and Ned Stark, but they never make so much as a cameo. In fact, no one from House Stark appears in the game, and the lone Lannister is Queen Cersei, who has the biggest role of any established character by far. Given those two houses are the focal point of the first book it seems odd that they’d play almost no direct role here.

As with many contemporary RPGs, you will have the opportunity to shape your story to some degree by your actions as well as your choices in dialogue. It offers potential replayability, but given the length of the game it’s hard to imagine many people will explore the branching paths.

When you’re not watching the story advance, most of your time will be spent in combat. Anyone familiar with Knights of the Old Republic will know what to expect as the system is very similar. Fighting can be done in real time, though in most cases you’ll want to slow things down and plan out your strategy by targeting specific foes and queuing up special attacks for both characters in your party.

These techniques are learned via an ability tree with points becoming available each time you reach a new level — experience points are earned through combat and by completing quests. Some skills are actual attacks while others are passive boosts. In general, attacks fall into three categories: regular, area and interrupt (wherein your attack stuns or knocks down an opponent). Each character has three different stances they can select from, so you can tailor your fighting style.

As a huge fan of KOTOR I had no trouble embracing the combat, but those that prefer to hack and dodge could find it boring. As noted earlier, success or failure from a given attack is determined by what are essentially virtual dice rolls. Plus, what appears to be a fairly robust system eventually reveals a very specific pattern of attacks that is so effective it is nearly pointless to do anything else. That makes for some repetitive gameplay.

Outside of combat there is little to do. Exploration is a virtual non-entity, even though each primary character possesses an ability to locate hidden caches of coins or weapons. There are also some side quests that span multiple chapters — such as recruiting people into the Night’s Watch — but they’re not that interesting and offer little payout for the time and effort required to complete them.

If a deliberately paced, story-driven RPG is of interest to you, Atlus’ Game of Thrones is definitely worth a look. However, if you’re someone that values polished graphics and engrossing gameplay it’s probably best to leave this one on the shelves.

By Herija Green
This entry was posted on Sunday, May 27th, 2012 at 1:22 pm and is filed under Herija Green, Video Game Reviews. You can follow any responses to this entry through the RSS 2.0 feed. Responses are currently closed, but you can trackback from your own site.