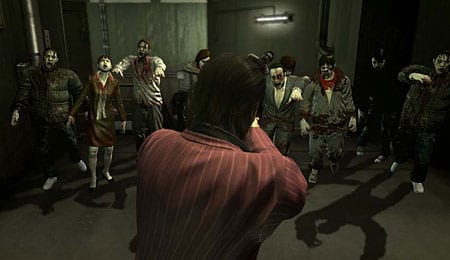 Zombies. They just won’t go away, will they? They’ve fueled a 15-year-old gaming franchise you may have heard of called Resident Evil. They’ve invaded prime-time TV in The Walking Dead. They’ve even popped up in games they shouldn’t belong in, like Call of Duty and Red Dead Redemption. But who’s complaining? They’re zombies, America’s favourite fodder for gun slaughter! And now they’re popping up in another unlikely franchise — Sega’s free-roaming, story-driven brawler series, Yakuza. Exclusively for the PlayStation 3 comes the bloodthirsty spinoff, Yakuza: Dead Souls.

The Yakuza games have a reputation for their open world exploration in realistic Japan locales, stylized fisticuffs and time-consuming mini-game libraries. With the Kamurocho district overrun with the undead and gruesome mutations, the protagonists in this installment will need more than fancy fighting moves to live through the epidemic. Most of the action will be spent force feeding these ghouls generous portions of bullets and shells using a comfortable control scheme. The right bumper fires your equipped weapon, holding the left bumper and moving strafes while auto-locking on targets and holding the left trigger secures your position for accurate aiming.

Pummeling zombies charges a “Heat Snipe” meter, a special QTE shooting event that can be activated on specific targets by pressing triangle. For example, when Heat Sniping a gas valve near zombies the camera will track the bullet to its target before prompting the player to press a random face button. Pulling this off will successfully ignite the gas, setting nearby zombies on fire. In further attempts to break the monotony, you can also pick up various items for melee combat similar to previous Yakuza titles as well as Dead Rising.

While the Yakuza series may be in a class of its own (a spiritual successor to Sega’s beloved Shenmue), the controls in this spinoff share more similarities to Dead Rising and Red Dead Redemption’s zombie DLC, Undead Nightmare. Unfortunately, Dead Souls doesn’t hold a candle to either of these sandbox dead fests’ controls. The melee combat doesn’t have the flair of its predecessors, and the hit detection is very unreliable. Shooting and camera movement is sloppy and seeing as how most of the game pits you in tight corridors, hallways and rooms, the end result can be disorienting.

Since the camera doesn’t always follow the back of your characters, there’s a sense of confusion when aiming the firearms. You may think you’re facing a horde of zombies, but when pulling up to fire, the camera often shifts to face an undesired direction. This is because the camera was originally facing the enemies and your character wasn’t. This automatic camera move is something you can turn off in the options, but the alternative is heavy manual camera management that detracts from the action. In either case, it’s bothersome and drags down what is an otherwise fun game to play.

One of the most appealing aspects of the Yakuza games is its realistic visual approach to its characters and locales. Whether you’re roaming the busy streets of Japan or chilling inside of a bar ordering a stiff drink, the environments and its inhabitants make even the nuttiest moments quite believable. And in this game’s case, the nuttiest moments involve the mish-mash of underground mob syndicate politics and bio-engineered death-dealing mutants. The same attention to detail found in the city when it was alive is brought to its chaotic version, full of burning rubble and bloody mayhem.

The native Japanese voice work and motion-captured acting is top notch for all of the major players in the story. The zombies are decent enough with a fair amount of variety as well as the bosses and gnarly mutations. Accompanied by an excellent soundtrack that’s appropriately filled with J-rock/J-pop tunes and overly dramatic title cards, this is a fine feast for fans of the modern East. Aside from some unoriginal monster designs and an overall lack of sharpness, I wouldn’t kick this game out of bed right away.

Yakuza: Dead Souls follows the path of four different characters from previous installments: slick loan shark Shun Akiyama , the kill-crazy “Mad Dog” Goro Majima, legendary bad-ass Kazuma Kiryu, and a former rival, Ryuji Goda, who is now fitted with a Gatling gun for an arm. Each main act focuses on one character at a time, with level building and support items carrying over to the following act. Experience points are earned via just about every action from zombie kills to completing sub-quests, and they’re used for upgrading stats and unlocking special moves.

If you’re a fan of this series, prepare to have a hearty amount of time plunked away once again. Along with all of the zombie carnage taking place in quarantined sections of Kamurocho comes the laid back mini-game goodness found in the uninfected areas where nothing seems out of the ordinary. Darts, ping-pong, karaoke, gambling and encounters with gorgeous hostesses may make you forget that there’s a zombie apocalypse to prevent. Seriously, stay away from them at all costs if you don’t want time to mysteriously pass you by.

Where was I? Massage parlor mini-game? No, I’m sorry, zombies! For those who like their action straightforward, Dead Souls has you covered. If mowing down the undead to bring Japan back to its former glory is on your main agenda, the objectives are presented in a manner that can make your experience as gun-happy as possible. Be warned, though: Dead Souls doesn’t score any originality points with its enemies. Picture a big, fat zombie that explodes and sprays green goo that attracts other zombies, or a fanged wall-crawler with a razor-sharp tongue. These are just a couple of knockoff monsters from Resident Evil and Left 4 Dead that can bring a certain level of tedium to those looking for a fresh perspective in the overpopulated genre of zombie killing.

Still can’t get enough of squashing some zed heads? Are you up to mastering some awkward shooting controls? Can you handle lots of loading screens? (There’s way too many of them, and they really do a great job of breaking the flow of the game.) In that case, you’ll probably want to add this to your queue for sure. Even if you skip the mini-games and sub-quests, you can still clock in about 15 hours of head-popping gameplay.

Seriously, folks, I can’t stay mad at Yakuza: Dead Souls. I just can’t. Sure, the gunplay is kind of frustrating at first, and the load times are pretty bothersome. But this is Japanese gangsters versus the undead, after all. It features a great cast of characters, some cool boss encounters and a slew of time-swallowing mini-games that make for an addictive adventure. Not bad for a spinoff title, if you ask me.

By Jess Castro
This entry was posted on Friday, April 6th, 2012 at 8:01 pm and is filed under Jess Castro, Video Game Reviews. You can follow any responses to this entry through the RSS 2.0 feed. Responses are currently closed, but you can trackback from your own site.