Video Game Review: I Am Alive 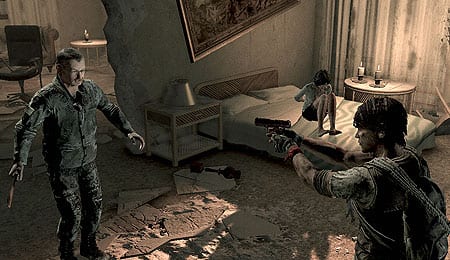 Survival rule #45: Never bring a knife to a gun fight.

Xbox Live Arcade’s House Party wraps up its month-long run this week with the release of Ubisoft’s I Am Alive. Billed as a more realistic post-apocalyptic tale, the game trades emptying bullets into zombies for carrying an often empty gun, scaling buildings and scrounging for supplies. The results are enjoyable yet occasionally frustrating due to a handful of issues.

There are two distinct halves to the gameplay, platforming and combat, and each has its corresponding pros and cons when controlling the action. Scaling buildings basically requires you to find a path and push the analog stick in the direction you want to go. While doing this you’ll frequently encounter distances that require an additional jump, which is done by pressing “A.” It’s usually very responsive, though there are times when you’ll want to go east-west at a junction but will end up heading north-south. Given that the entire mechanic is based on an ever decreasing stamina meter, this can lead to some exacerbating moments.

Combat is built on what Ubisoft referred to as a “bluffing system,” and from a controls perspective it’s a tad dicey. You can swing your machete with the “X” button — only during combat situations — for surprise or struggle kills (the latter requires you to mash the right trigger to outfight your foe). You draw and aim your gun — and eventually a bow — with the left trigger, and cycle through targets with the right stick. You can engage manual aiming as well, but you’ll use that exclusively against the guys in body armour.

That all sounds, and generally works, fine… until it doesn’t. Since bullets are extremely scarce you’re often going to be using your gun to set up enemies. While aiming at someone you can instruct them to back off by pressing “X,” which is how you get them in compromising situations — for instance, standing in front of a fire. Unfortunately, sometimes the game doesn’t recognize the command and your foes don’t move. At that point you’ve either got to waste a bullet or reload a checkpoint since eventually they’ll stop being scared and attack.

At first blush the imaginary city of Haventon looks pretty good. It has washed out colours and a grayish hue to everything, which seems befitting of a world ravaged by some unspoken disaster. It’s bleak and devoid of hope — like something from the pages of Cormac McCarthy’s The Road. However, once you start to move around at ground level the ever-present dust cloud obscures too much of your vision and becomes a nuisance. Character animations are also pretty choppy, giving off a stiff and mechanical feel that hurts the presentation.

While not great, the minimalist soundtrack in I Am Alive is effective. Much of the game is played in almost complete silence with an anxiety-ridden orchestral tune welling up as your stamina meter depletes. It’s an effective way to keep players aware of trouble without forcing them to constantly monitor the meter itself. Voice acting is decent, but the main characters never really convey the type of desperation someone in those circumstances would surely feel.

It’s been roughly a year since an “event” destroyed the world as we know it, leaving behind a crumbling mess besieged by earthquakes, sickness and famine. During this time you have been making your way back to Haventon in the hope of finding your wife and child. It doesn’t take long for the story to deviate from that path, though, as the majority of the game sees you helping out a young girl and her mother in an attempt to extricate them from the city. That your primary objective — one that you spent the last 12 months working toward — is so quickly and easily abandoned hurts the story portion of the game.

As noted, gameplay is broken down into platforming and combat. The platforming has a similar layout to games like Uncharted and Assassin’s Creed, though with a heavier focus on realism — you can forget about the smoothness of Nathan Drake or Ezio. Here all physical actions are governed by a stamina meter that drains when you do almost anything other than walk. It’s not a steady crawl, either, as some actions put a much larger strain on you than others. For instance leaping from one ledge to another will take a lot more out of you than sliding down a beam or running.

Should your stamina meter hit zero you’ll start to lose stamina capacity, which reduces the size of the actual bar until you consume something that rebuilds the meter. It’s advisable when possible to use items like soda cans and water bottles before you completely run out as these are more plentiful. Still, even in a game that touts scarcity and conservation as gameplay elements I reached the credits with enough first-aid kits, fruit cocktail and rat meat to handle just about anything.

Combat utilizes the aforementioned “bluffing system,” which is the technical term for “I’ve got a gun with one bullet and there are three of you with knives; how are we going to solve this?” On paper I think the system is really intriguing. I like the idea of people you encounter having different reactions to a gun being pointed at them. It holds a lot of potential. Unfortunately, most of that potential goes unrealized, and what’s left is serviceable but not overly interesting.

The biggest issue is that running is never an alternative — for you or them. You can’t pull a gun on someone, slowly back away and then book it. Conversely, nobody ever takes one look at a pistol pointed at their chest and hauls ass in the opposite direction. Machete-wielding enemies always back off unless they’re right on top of you, whereas gun-toting foes always open fire.

This turns what should be unique encounters into an absolute playbook. By the midpoint of I Am Alive you know with near certainty how each standoff should be approached to be successful. It’s like Logic 101: if the enemy is X, then do Y; if they’re W, then Z. There are only so many different combinations of gangs that the game throws at you, and there is a clear cut method for success with each one.

Although the game is mostly linear, there are opportunities to scout around and help some of the ailing citizens scattered about Haventon. Ultimately these are straightforward fetch quests that only net you a retry and some achievements, but they at least encourage exploration. As you progress you’ll obtain new items that allow you to access other areas and trudge further away from the safety found above the low-lying cloud of dust.

There is nothing outside of the campaign mode, though a “survivor” difficulty setting offers a tougher version of it. Here the game stops providing you with retries, which allow you to go back to the most recent checkpoint, and forces you to earn them by finding them or helping survivors. Run out and each death forces you to return to the start of the current chapter.

I Am Alive could’ve been more than it is with just a few adjustments, most notably tightened controls and a non-violent option to gang encounters. That said, it creates a unique atmosphere that is absolutely worth experiencing.

By Herija Green
This entry was posted on Wednesday, March 7th, 2012 at 9:13 am and is filed under Herija Green, Video Game Reviews. You can follow any responses to this entry through the RSS 2.0 feed. Both comments and pings are currently closed.