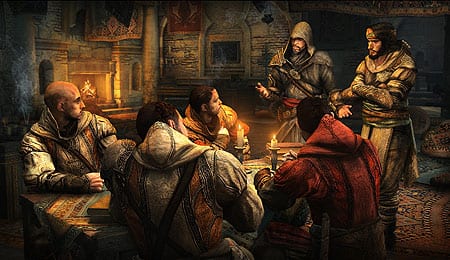 Ezio once again tries to calmly explains that “Casual Friday” does not mean hoods are optional.

Ever since releasing the fascinating yet flawed Assassin’s Creed, Ubisoft has been tinkering and tweaking the franchise with streamlined combat, new gadgets and even online multiplayer. Its latest release, Assassin’s Creed: Revelations, is the fourth iteration and final chapter in the Renaissance setting that has taken gamers to some amazingly recreated historical cities. So is Revelations a worthy farewell to the story arc or has Ubisoft gone to the well once too often?

With four games in five years, Ubisoft has had plenty of time to iron out the kinks when it comes to Assassin’s Creed’s unique control scheme. The face buttons still handle all of the action while the bumpers and triggers serve to summon assassins, browse your available weapons and switch between normal and high-profile modes. AC’s silky smooth free-running system is still one of the best things in gaming, even if you’ll occasionally climb or jump off objects you didn’t intend.

However, in a strange move, these signature controls are abandoned for a series of optional side quests that flesh out Desmond’s back story. Here the action switches to a first-person view where you’ll create blocks out of thin air within the Animus to navigate the level. It felt very clunky and made playing through those segments a chore.

Visually, the Assassin’s Creed series has always been a heavy hitter, and even with relatively minor improvements over last year’s Brotherhood, Revelations continues the tradition. Exploring the massive city of Constantinople is a joy thanks to the fluidity of movement as you scale towers, leap across rooftops and descend onto unsuspecting guards. The timing-based combat reversals look as brutal as ever with a few new animations and a cool slow-mo feature that kicks in when defeating your last foe. There are times when objects will vanish and reappear, but it’s a fairly rare occurrence.

The soundtrack features a subdued yet powerful score that never overpowers the on-screen action. It was actually striking to hear such a minimalist approach during large segments of the game, but the melancholy tones fit the darker mood of the story. There’s also no shortage of strong voice acting with characters displaying the type of range and depth that hadn’t been asked previously.

Ambitiously following all the protagonists from the first three installments, Revelations takes place in three different times and locations. The bulk of the story follows an aged Ezio Auditore as he tries to track down a series of mystic keys left by his ancestor, Altair. As each key is recovered, a piece of Altair’s life both during and after the events of the original Assassin’s Creed is revealed. Simultaneously, Desmond has essentially become lost within the Animus in the present day and is trying to make sense of it all — as noted you can also reveal chunks of Desmond’s past.

While the story is new, the gameplay remains largely unchanged. You’ll still be embarking on a series of missions, each with a secondary objective to complete to earn 100 per cent synch, that usually centre around tracking down a target for information gathering or eliminating them entirely. Suffice to say, if you enjoyed the structure of previous AC titles this should be right up your alley.

That being said, Revelations does step outside its comfort zone on more than a few occasions with some pretty spectacular results. At the front of the line are several fast-paced climbing/exploring missions that look as though they were ripped straight from Uncharted. Dynamic camera angles and scripted events give these sequences a very cinematic feel, and they’re a blast to play.

In addition, new items and mini games have been added. For the former, the two big newcomers are bombs and the hook blade. It’s pretty clear early on that the developers wanted to push the inclusion and use of bombs as you’ll find the materials needed to craft them everywhere. There are even times when the full synch objective is using them. The problem is, if you’re anything like me you’ve already grown comfortable with your approach to tackling missions, and since their structure is so similar there’s little reason to deviate.

Another issue is that the three types of bombs you can carry at a given time further clutter an inventory that has already been saturated by additions made in previous games. You can already throw knives, fire a gun, shoot a crossbow, poison someone (via blade or dart), use hidden blades, etc. Was anyone really clamouring for another way to kill and/or distract guards?

Whereas the game encourages you to use bombs, it mandates use of the hook blade, which replaces one of your hidden blades and allows for a handful of new moves. In combat you can now charge at an enemy and use the hook to roll over the top of them while maintaining speed (very useful in a chase), and when moving it allows you climb higher and slide down zip lines. It’s a cool addition that provides some options when on the run.

Revelations’ primary new mini game is an updated version of the Borgia towers. You can still liberate zones from templar control, but now the templars can attempt to reclaim them. These assaults trigger a tower defense offshoot that feels woefully out of place. The interface is clunky, the attack waves are unbalanced and it’s ultimately pointless because even if you lose influence over a section you can literally assassinate the new templar captain in a matter of seconds to retake control.

Beyond “Den Defense,” you’ll still find a host of peripheral options to keep you occupied. Feathers and flags have been replaced by Animus fragments, which unlock the aforementioned Desmond missions, and memoir pages. Recruiting and leveling up assassins returns along with the ability to dispatch your troops to other regions for experience and money bonuses. There’s also the restoration of shops and plenty of items/armour to purchase.

Multiplayer, which made a surprisingly strong debut in Brotherhood, is back and has been tightened across the board. The mixing of being both predator and prey (often simultaneously) makes for a high degree of tension as you walk amongst scores of NPCs that may or may not actually be other templars itching to drive a blade through your back. A lot of balancing has clearly taken place, highlighted by the “Honorable Death” system that assuages the inevitable kill/stun frustration that takes place whenever each player is sure they should’ve wound up on top.

New maps and game types have also been added, offering some pretty interesting and enjoyable variants on the modes you find in most FPS titles. Artifact Assault, which is basically Capture the Flag, stands as perhaps the best of the team-oriented styles. And lone wolves should have little trouble finding something to their liking amid the five takes on standard free-for-all matches.

On top of that there’s a deep level of customization available as well from big items like new abilities all the way down to things like snagging a new belt for your character. Each purchase requires a specific level been attained (gained by earning experience points in matches) and certain number of Abstergo credits (earned by playing in those matches). It’ll never attract the numbers that FPS and sports games do, but the multiplayer aspect of Revelations is really strong and presents a nice online alternative to those genres.

Assassin’s Creed: Revelations brings the Ezio/Altair story arc to a close with an interesting, more personable story and classic AC gameplay. That it’s packaged with an exceptionally well-executed multiplayer makes it an easy recommendation for adventure fans.

By Herija Green
This entry was posted on Thursday, November 24th, 2011 at 9:54 am and is filed under Herija Green, Video Game Reviews. You can follow any responses to this entry through the RSS 2.0 feed. You can skip to the end and leave a response. Pinging is currently not allowed.