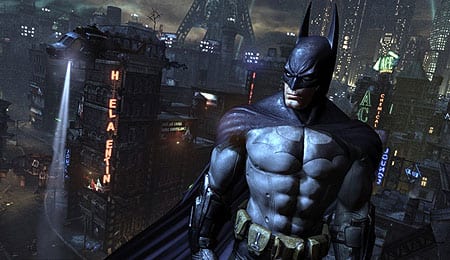 Rocksteady has unified all of the good versions of Batman into the ultimate Bat-experience.

Batman: Arkham Asylum set a new bar for games based on media properties. You didn’t just play as Batman, you felt like Batman, and it was awesome. Now, take that same setup, add more villains, and increase the gameplay area by about tenfold — that’s Arkham City, a sequel that’s so vast that it almost makes Arkham Asylum look like a tech demo.

When I’ve explained the differences to my friends, I compared the first game to Bioshock and the second game to Assassin’s Creed. Does the Dark Knight survive this transition? Not only does he survive, he thrives in it — Arkham City is one of the best games of the year hands down. In fact, the first 10 minutes has to be one of the most gripping setups I’ve ever seen in a game (particularly for a huge Batman fan), and it only gets better from there.

If you played Arkham Asylum, then Arkham City’s controls will instantly be familiar to you. Batman moves at an over-the-shoulder camera angle, with the face buttons being used for environment interaction, basic melee combat, secondary “stun” combat, and one for counter moves. The directional pad pulls up Batman’s gadget window, which starts off with familiar toys from Arkham Asylum, but this will build as you delve deeper into the game. The trigger buttons also carry over from the first game, from activating the ever-useful Detective Mode and Scan Mode to aiming a particular Bat-gadget.

Once you’re in action, you’ll notice a bit of evolution in the controls. For example, when fighting armed enemies, the counter button now has multiple uses — against guns, it will drop a smoke bomb, and against knives, it will help Batman dodge a deadly swipe. And while Rocksteady carried over just about all of the good parts of Arkham Asylum, I really wish it had cleaned up the ground takedown moves (executed by hitting two face buttons at once when an enemy is dizzy). The detection for this just isn’t crisp, and the actual animation winds up being fairly slow, so you’ll often wind up getting knocked out of the movement before you can take the enemy down.

Flying is a big part of Arkham City. Yes, you could glide in Arkham Asylum, but here you’ll have Batman use his claw to propel him to a launching point, then build up speed straight down, only to swoop back up over the city. If you master this, you can basically go across the entire city this way. It’s an entirely new experience compared to the previous game, and it adds another dimension to how the game handles.

From a presentation standpoint, this is quite possibly the best Batman experience you’ll see and hear pretty much ever. Of the on-screen Batman identities, Arkham City essentially melds each of them together into a unified vision. The gritty world we saw in Chris Nolan’s Batman Begins and The Dark Knight is there in the atmosphere and tone of the game, while Tim Burton’s surreal vision of Batman and his enemies is applied to the characters. Voiceover performances are taken from the award-winning Batman: The Animated Series with Kevin Conroy as Batman (and, in my opinion, the best actor to ever play Batman/Bruce Wayne) while Mark Hamill’s sadistic Joker is always a joy to behold.

The city itself reflects this amalgamation of different Batman versions. Arkham City itself is vast and detailed. It’s dark, of course, but it’s not like Batman runs around at lunchtime. Different parts of the city reflect the different factions that are in charge — for instance, when you get to Joker’s area, you’ll know that the Clown Prince is calling the shots. The city’s gothic architecture is in gritty decay, yet there’s an air of fantasy around every corner.

Unlike the first game, you’ll encounter the elements too, whether that’s the snowfall (think about which character might be in that area) or the water. Just about every environment looks like a living piece of concept art — stylized, detailed, and full of malevolent wonder. Despite the grim tone and dark lighting, it’s difficult not to just sit around and enjoy the world you’re in.

In Arkham City, you can pretty much do everything you ever wanted to do as Batman. Beat up a bunch of thugs? Easy. Take on your favourite super-villains? Been there, done that. Fly over the city, then swoop down on unsuspecting bad guys? Yes, you can do that too. From playing in full stealth mode to flat-out brawling to putting all of Batman’s “wonderful toys” to use, there’s so much to do in Arkham City, it’s pretty much overwhelming.

Of course, there’s the main storyline, and it involves the actual formation of Arkham City and Joker wanting revenge (what else?) following the end of the first game. But there’s something around every corner to distract you should you want a change of pace. The Riddler’s puzzles are back, but they’re much more devious — and difficult — this time around. You’ll also get phone calls and radio signals to help out various people in Arkham City, and even iconic comic book characters show up for side-quest fun.

With so much to do, the core innovation of this series — Batman’s melee ability — can almost be a drag at times. Yes, it’s still cool to take on a dozen thugs and beat them senseless through seamless punch/counterpunch combos. However, when you just want to get to your objective and yet another group of supervillain subordinates is there to slow you down, it’s a bit annoying, especially because you no longer need them to level up since there are enemies scattered all over the city.

Quest design can be a bit frustrating at times too. Arkham City is huge, and it’s obvious that Rocksteady wants you to explore and enjoy all of it. However, some quests force you to traverse the city by telling you to go to Point A, then saying you need something from Point B across town, then sending you back to Point A. Backtracking is never fun, and while this isn’t always part of quests, it shows up on occasion to be a mild irritant.

All of this is nitpicking, though. Arkham City is skillfully developed and masterfully executed — and with DLC missions for other characters, including the fantastic Catwoman subplot — you’ve got at least 100+ hours of gameplay if you want it.

Outside of a few technical issues and annoying design decisions, Arkham City is pretty much near perfect. Its only true fault is that it’s got perhaps a little too much to do — some people will eat it up and some people will prefer the more focused pacing of its predecessor. Whatever side of that you fall on, it’s guaranteed that both types of players will marvel at what Rocksteady has accomplished.

By Mike Chen
This entry was posted on Monday, November 14th, 2011 at 12:36 pm and is filed under Mike Chen, Video Game Reviews. You can follow any responses to this entry through the RSS 2.0 feed. You can skip to the end and leave a response. Pinging is currently not allowed.