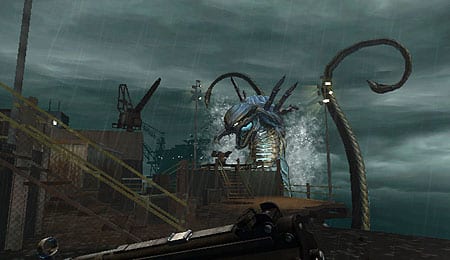 See? This is why off-shore drilling is a bad idea!

If you are part of the rare breed that (a) only owns a Nintendo Wii; and (b) is a shooter fan, there hasn’t been a lot to sink your teeth into since Metroid: Other M and GoldenEye 007 launched last fall. Looking to fill that void, SEGA has released Conduit 2, the sequel to 2009’s The Conduit. Its sharp graphics make it stand out immediately, but can the gameplay keep pace?

Although it offers up both Wii MotionPlus and Classic Controller support, Conduit 2 is not the most responsive game regardless of which option you select. With the standard controller, though, it really boils down to two central issues: aiming and ducking. The right analog stick just never felt smooth even after I messed with the settings, which led to a lot of time spent in cover methodically lining up shots. Getting behind said cover is tougher than it should be as well because the game seems to frequently ignore you telling it to duck.

It actually could’ve been a lot more debilitating were it not for some underwhelming enemy A.I., which is generally content to trade fire from across the room. You will be rushed by foes, but they’re usually trying to melee you so accuracy isn’t as vital.

While you’re never going to match the visuals of the Xbox 360 or PlayStation 3 on the Wii, developer High Voltage Software deserves credit for squeezing what it could out of it. The game’s campaign takes you to several varied locations, all of which are very nicely detailed, and introduces a number of different enemy types to keep things fresh graphically. Weapon fire and explosions are satisfying and character animations look smooth.

There are a couple of drawbacks, however, most notably some dips in the frame rate when the on-screen action gets a little too hot and heavy. Chunks of the game also take place in some really dark settings and at times I struggled to make out whether an area was accessible or not.

Conduit 2 takes a very tongue-in-cheek approach to the shooter genre, and how you feel about that will likely go a long way in determining your thoughts on the voice acting. I wavered back and forth quite a bit, sometimes enjoying the main character’s banter and other times feeling it stepped too far over the cheesiness line. The sounds effects and music are fine.

Picking up right where the original left off, you play as Michael Ford, a special agent determined to bring the sinister John Adams to justice. The story doesn’t provide much depth or clarification for what exactly is going on, but the broad strokes are you need to track down a group of powerful beings known as “progenitors” and warn them about Adams’ intention to kill them and steal their powers.

There is some back story to be fleshed out by scanning certain objects, but it’s mostly for fun and nothing you find is going to add much to the proceedings. This is a game that doesn’t take itself very seriously and instead allows the action to drive things forward.

As noted, Conduit 2 takes you to a lot of different locations. However, the action you encounter is pretty similar from one stop to the next. Most levels have you going from Point A to Point B, shooting lots of bad guys and then activating (or deactivating) a switch. A handful of set pieces and some cool boss battles break up the formula, but it would have been nice to see more variety.

The battles themselves tend to be enjoyable. Each enemy type boasts a fairly strict attack pattern — heavily armoured troopers advance slowly, standard grunts fire from distance, etc. — that allows you to formulate a plan as opposed to just quick twitch reactions. It can result in a more deliberate pace than you might expect, but that helps compensate for the touchy targeting reticule.

Even with that the single-player campaign, is not very long. A skilled player should have little difficulty finishing in around six hours, though hunting for the game’s various collectables (which you acquire by scanning them Metroid Prime style) and cranking up the difficulty setting can tack on some extra hours. Ultimately, there are enough guns, action and fun moments with Ford and Prometheus (your electronic companion) to make it well worth playing.

Shifting the focus online, Conduit 2 boasts a respectable multiplayer component. I’ve long had serious trouble with lag when it comes to online Wii titles, which made the relatively smooth frame rate I encountered during my time with Conduit 2 all the more welcome — and I was even running it through the built-in WiFi connection, something I rarely did in the past.

There are several modes to partake in, but there’s nothing here you haven’t seen before with a mix of team and free-for-all modes. Combat seems to hold up best at intermediate range with close-quarters battles devolving into hopping around and firing a lot in the hope of killing your opponent.

Customization is one of Conduit 2’s stronger elements and should keep people grinding away for the in-game currency. With it you can alter your appearance, acquire lots of new upgrades for your suit and much more. It may not match Call of Duty’s tiered unlocks for sheer addictiveness, but on a console that’s largely bereft of engaging online shooters, it’s great to see those kind of incentives being dangled out there to keep gamers coming back for more.

With the Nintendo Wii on the way out, it’s hard to say how many more worthwhile titles are going to find their way onto shelves, however, Conduit 2 is one of them. Despite some missteps, it’s an action-heavy experience with plenty of replay value.

By Herija Green
This entry was posted on Saturday, April 30th, 2011 at 12:43 pm and is filed under Herija Green, Video Game Reviews. You can follow any responses to this entry through the RSS 2.0 feed. You can skip to the end and leave a response. Pinging is currently not allowed.