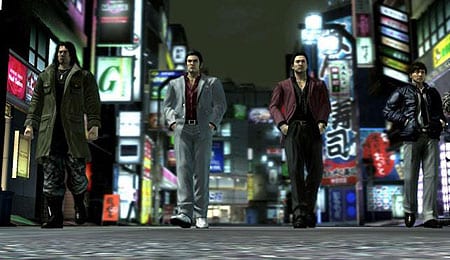 Rule #1 of being a bad ass, DO NOT zip or button your jacket under any circumstance.

Released roughly a year ago in Japan, the fourth installment of Sega’s Yakuza series, Yakuza 4 has finally reached North American shores without the editing that took place with the previous game. The result is a uniquely foreign-feeling affair with many elements you rarely, if ever, see in a Western title. But is such a departure from the norm refreshing, or detrimental?

At its base level, Yakuza 4 is all about hand-to-hand combat. Face buttons handle attacks, grabs and evasions. Shoulder buttons cover blocking and taunting. There are no complex commands to enter with combos easily pulled off based on how many times (or in what order) you push the buttons. The only real issue is targeting, as with multiple enemies converging on you from all sides you can easily misjudge the angle of attack and end up punching air.

Secondary activities (like fleeing, chasing and mini-games) all have their own uses for the controller with varying degrees of success. Trying to outrun the cops while weaving down alleyways feels shaky as you attempt to follow the on-screen flight path and also rotate the camera. Button mashing mini-games are never fun, and that’s no exception here.

Whatever shortcomings may exist from a technical standpoint, the way the fictional city of Kamurocho is brought to life is outstanding. It just feels like a hub of activity with bright lights and people bustling about. While not expansive in the way Liberty City (Grand Theft Auto’s sandbox of choice) is, there’s still a ton to do in the form of various restaurants, social clubs and other places of interest to visit. Textures may look a bit muddy up close, but from the default distance it looks good.

Character models and fighting animations are also strong. Many of the finishing moves look downright brutal and are really fun to pull off. Animations outside of the fighting and cut scene realms tend to look a bit stiff, however, and you’ll see some of them repeatedly, such as the leaning in/taunting action that just about every street punk and nameless yakuza in the game seems to do.

Voice acting in the game is done in Japanese with English subtitles, so it’s tough to accurately judge how strong individual performances are, though it all sounds well done. Unfortunately, the strange back and forth between voiced and text-based dialogue (often in the same conversation) creates a disconnect that pulls you out of the game’s most critical element, its storytelling. Sound effects, particularly those during fighting sequences, are solid, as is the soundtrack.

For those that are unfamiliar, Yakuza 4, like its predecessors, is one part beat ’em-up and one part cinematic crime drama with just a hint of role playing sprinkled in. However, while all these elements go into creating the game as a whole, there’s no doubt that the story is the key component in determining whether or not you’ll enjoy the experience.

In Yakuza 4, you’ll play through four divergent yet intertwined storylines that follow the lives of four protagonists — Shun Akiyama, a philanthropic loan shark, Masa Tanimura, a cop that’s not above taking a bribe, Taiga Saejima, a legendary hitman imprisoned since 1985, and series stalwart Kazuma Kiryu — in the attempt to unravel a series of mysteries.

That’s certainly a broad overview, though, as the intricacies of the story can be difficult to follow, particularly toward the end when the twists are coming fast and furious. Part of the problem is that the game can be incredibly long if you choose to participate in peripheral quests and activities, meaning story advancement can be spaced across 50-plus hours. This makes it difficult to keep track of the many different players that are involved.

The bigger issue is that the story becomes more and more convoluted the longer it goes. At about the three-quarter mark, I felt I had a pretty good grasp on what was going on, but the game just continued to throw so many “surprises” at me that I ended up lost. You can only pull a bait and switch so many times before it becomes anti-climactic. And that’s the issue here as there’s seemingly always someone a notch above the guy you thought was behind it all. Add that to some deliberately misleading scenes and I was left feeling that Yakuza 4 never played fair with what it presented.

Ultimately, however, I still thoroughly enjoyed playing through the lengthy campaign for one simple reason: character development. Whatever you think about the overarching plotline, Yakuza 4 does a great job of creating three-dimensional characters that you care about. Even as someone that usually “roots for the bad guys,” I liked who I was supposed to like and hated who I was supposed to hate here.

When you’re not sitting through lengthy cut scenes punctuated by plenty… of… long… dramatic… pauses, you’re going to be knuckling up, a lot. Yakuza 4’s action is broken down into numerous hand-to-hand battles on the streets and rooftops of Kamurocho. Some fights are part of the game’s story, which includes a number of tough boss fights, while many others are random scrums with gang members, street punks or random yakuza that pick fights with you as you walk the streets. The setups to these random dust ups are a bit silly, but it still gives you the chance to hone your techniques.

Speaking of techniques, each of the four main characters has their own fighting style. This is a great move as it keeps combat from becoming too much of a grind as fighting with Tanimura, who relies on speed and parrying, feels a lot different than brawling with Saejima, who overpowers his foes. Landing blows fills up your HEAT meter, which gives you access to devastating maneuvers that can finish off lesser adversaries. The variety of animations for these moves is awesome, and they’re so slickly done and brutal looking that you’ll want to call your friends into the room to watch.

Yakuza 4’s minimal role playing elements come into play here. You earn experience points by fighting, completing side quests and eating and drinking. Level up and you’ll earn Soul Points that you can use to learn new moves. It’s a simple, tried and true formula that prevents all those random street brawls from being nothing more than a bunch of glorified sparring sessions.

Outside of the main storyline there is a ton to do. The aforementioned side stories provide even more insight into the characters and are well worth completing. There are also plenty of more casual activities in the form of mini games — pool, batting cages, bowling, ping pong and even karaoke are available, and that list doesn’t even scratch the surface. Western gamers may take a special interest in the hostess bars and massage parlors, which feature a decidedly Eastern vibe. Some are more fun than others, and some (like mahjong) would’ve benefited from a more in-depth tutorial.

Fans of the type of open world games that Rockstar has become synonymous with owe it to themselves to experience Yakuza 4. Granted, it can try your patience with lengthy cut scenes and a number of “wait, what?” moments, but the characters are well fleshed out and the combat is brutally fun.

By HC Green
Tags: Yakuza 4
This entry was posted on Tuesday, March 29th, 2011 at 10:44 am and is filed under Herija Green, Video Game Reviews. You can follow any responses to this entry through the RSS 2.0 feed. Both comments and pings are currently closed.