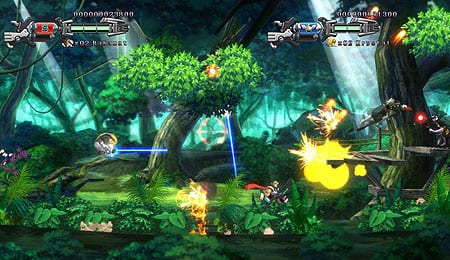 Ah, Contra, one of my all-time favourite arcade titles. The unrelentingly difficult side-scrolling shooter is the prototype for Konami’s upcoming Hard Corps: Uprising, which is, in fact, a prequel to Contra: Hard Corps — a sequel to the original. Developer Arc System Works pays homage to its source material by crafting another unforgiving entry in the series, but one that isn’t without its share of missteps.

Despite honouring the simplistic run-and-gun formula, Hard Corps: Uprising has a surprising amount of control options to wrap your head around. Every button on the Xbox 360 controller is in play, meaning your hands will be busy trying to stay alive in the face of a constant onslaught. It’ll take some time for things to become second nature, which is the necessary familiarity level late in the game. Once it clicks, though, you’ll find you can pull off some pretty cool stuff.

It’s tough to find much fault in the game’s beautiful hand-drawn artwork, which has a distinctly anime flavour to it. Each of the eight locations is different as you battle everywhere from sparse deserts and lush jungles to high rises. Even amid chaos, enemy fire is generally easy to spot (avoiding it is another matter entirely) and I never encountered dips in the frame rate. The massive bosses are well designed and while there aren’t a ton of enemy types, what’s present looks good.

On the other side of the coin is a decidedly unimpressive, and at times annoying, soundtrack. The decision to favour loud metal can serve as a distraction — not something you want in a title that demands your full attention — and the terrible voiceover work gets old quickly. Sound effects are fine.

Hard Corps: Uprising opens with a fairly lengthy animated sequence that lays out the basic plotline for us, but after that, 99 per cent of the story advancement is handled via a couple of paragraphs to be read while the next level loads up. In short, it’s the year 2613 and the world is ruled by a dictator named Tiberius. The resistance movement is in trouble so it’s up to you (Colonel Bahamut) to locate and then take Tiberius out before all hope has been extinguished.

Things begin in the desert with Bahamut (or Krystal, the other playable character) instantly finding himself against long odds. Gamers weaned on titles with built-in tutorials may be in for a culture shock as there’s no hand holding to be found here. Quite the opposite. It’s going to take most numerous tries just to clear the first level, which only gives you a small taste of the type of punishment you’re in store for during the game’s eight-stage campaign.

For better or worse, this is old school, pull no punches and make no apologies gameplay, meaning death will be coming early and often for the uninitiated. Sometimes it’s cleverly designed challenges that’ll eventually be overcome by memorizing patterns and honing your skills. Other times, however, it’s infuriatingly cheap. Things like an off-screen enemy leaping through the air to crash into you as you’re trying to jump across a pit, leading to an instant kill. Short-fused gamers would do well to invest in a little controller insurance before advancing too far in this one.

As tough as platforming and dealing with standard foes can be, the truly torturous moments often come in the form of the game’s plentiful boss fights. Seemingly each of the eight levels has multiple bosses and sub-bosses to deal with, many of which require you to best several forms before advancing. Some of these fights are downright brutal and serve to underscore one of the game’s most disappointing elements: the checkpoint system. It’s not uncommon to have to fight the same sub-boss several times, and with many stages lasting better than 20 minutes it can get really repetitive.

The game features two modes: Arcade and Rising. The former is for sadists only as Arcade strips you down to the basics with minimal health and abilities while forcing you to start from the beginning each time. Rising mode will be where most will spend their time. It starts you in the same boat as Arcade, but as you progress you’ll earn points to purchase more health bars, weapon/skill upgrades, additional continues and unique abilities like the triple jump. You can also begin from any stage you want once you’ve cleared the preceding one.

As in previous Contra games, in-game weapon power-ups allow for augmenting the basic rifle with things like a machine gun, spread shot and flame thrower. The power-ups can be stacked up to three times, creating an exceptional weapon, but even a single hit from an enemy will take it all away so you can never relax. You’ve also got to be mindful of not accidentally grabbing a power-up to replace your current one. Believe me, it’s a disheartening feeling when your maxed out spread shot gives way to a Level 1 ripple gun.

In addition to single player, Hard Corps: Uprising also supports local and online multiplayer. This is where the game is really at its most fun (well, at least until your shaky partner starts stealing your extra lives) even if some of the more difficult jumping sequences border on impossible to coordinate remotely. Offline co-op should create some nostalgia for seasoned gamers while online runs smoothly and could open things up for some impressive YouTube runs.

At various junctures throughout my time with Hard Corps: Uprising, I professed both my love and hatred for the game. The difficulty level borders on ridiculous at times, including a handful of moments that I cringe at the mere thought of repeating. And yet, I keep coming back, because advancement takes real patience and skill. When it clicks, it can be something special.