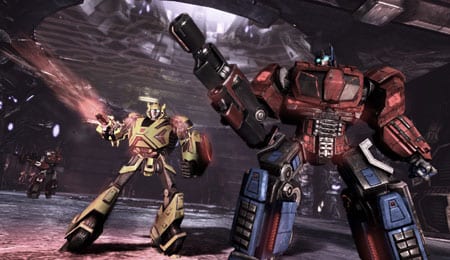 Optimus Prime and Bumblebee…before the taint of associating with Spike.

My favourite cartoon growing up was Transformers, hands down. I watched the TV show, played with the toys and collected the comic books. However, where the franchise always came up short was in trying to create an enjoyable video game — a surprising shortcoming given the source material of giant robots that turn into destructive vehicles. Well, I’m pleased to say that someone final got it right as High Moon Studios’ Transformers: War for Cybertron fulfills nearly every fantasy eight-year-old me dreamed up.

When in robot form you’ll find things pretty much follow the standard Call of Duty setup, including using the left trigger to aim down the sight and clicking the right analog stick to melee enemies. Some of the differences include a pair of abilities assigned to the bumpers, and the option to transform by clicking the left analog stick. It all works well even if there were times I felt like I was plodding along.

The vehicular modes tend to be hit or miss. I enjoyed transforming in tight quarters to zoom around the battlefield, but I didn’t think it held up as well during longer sequences. The pseudo on-rails elements of flying make it a bit confusing as to where you can maneuver, and it always seemed like the cars were hovering slightly above the ground without any feel for the road.

High Moon Studios chose to essentially blend the original (or G1) cartoon with the recent Michael Bay films to create a unique, almost hybrid appearance. The results are excellent. Despite being given significant makeovers, pretty much every transformer that appears in the game will be instantly recognizable to G1 fans, with the possible exceptions of Silverbolt and Air Raid. The game does make some changes in the interests of gameplay (such as Soundwave turning into a truck), but still stays incredibly faithful to the source material.

The environments are reasonably well varied for an entirely metallic world, though the same cannot be said for the nameless cannon fodder you’ll meet during the campaigns with a handful of designs being reused throughout. Given the incredibly deep roster of transformers available to use it would’ve been nice to see a few more cameos worked into the equation as mini bosses instead of the imposing yet ultimately anonymous foes that fill that role instead. The frame rate is also prone to some slowing when things really get hectic, though it never becomes debilitating.

With the exception of Peter Cullen as Optimus Prime, none of the original G1 cast returns, but the voice work is still largely exceptional. Once again High Moon Studios displayed its appreciation for the original cartoon by retaining the styles of speech such as Soundwave’s synthesized voice and Warpath’s signature “BAM! BOOM!” mixed in. My lone disappointment was Starscream, who was perfectly voiced by the late Chris Latta. It was such a huge part of what made that character a mix of dangerous and cowardly that I would’ve rather heard a sound-alike than what made the cut.

The sound effects are outstanding, and it’s a game you’ll want to play with the volume cranked. They also nailed the signature transformation sound, which may be the second-coolest noise in the sci-fi universe behind an igniting lightsaber. The music is solid without being particularly memorable, and it’s actually nice that it takes a backseat given how strong the other audio elements are.

As the title suggests, Transformers: War for Cybertron takes place long before the Autobots and Decepticons make their way to Earth. The story, which is considered to be officially licensed canon by Hasbro, is in fact more of a re-imagining than a true prequel. Yes, there are many elements from the G1 series covered here from the significant (Starscream’s relationship with Megatron) to the mundane (Silverbolt’s fear of flying), but there are also plenty of inconsistencies with the original mythos, including the appearance of several Transformers that were “created” during G1.

Once you move past such things, the story itself is told over two five-chapter campaigns. The Deceptions are featured first as you follow Megatron and his cronies on their quest to take control of the planet itself. Switching to the Autobots side chronicles the rise of Optimus Prime from determined soldier to inspirational leader. It’s well crafted and will leave you wanting more…a lot more. And the ending certainly points toward (hopefully) a sequel.

Each level begins by offering you the choice of playing as one of three Transformers with the other two being A.I. controlled. You’ll find your options fit into one of four classes (leader, scout, soldier and scientist) each with unique weapons and abilities, though the characters can pick up and drop any gun found along the way leaving only their vehicular mode gun different from one to the next. That sense of familiarity hurts the replay value a bit as there’s little difference between fighting through a level as Megatron as opposed to Brawl.

The levels themselves are home to intense fighting with minimal down time throughout the roughly 12-hour campaign. There is no cover system in the game, which encourages a frenetic pace where near death experiences are countered by hasty transformations and dashes to safety. Given that there was talk early on that Transformers: War for Cybertron would follow the Gears of War model for fighting, I think the developer made the right call here as it really forces you to be creative with your attacks rather than just ducking behind cover and blind firing at your enemies.

Where the game struggles is with enemy and friendly A.I. as foes too often leave themselves completely exposed while teammates wander into your line of fire or even miss a lift and are completely absent until you reach the next checkpoint where they suddenly reappear. Of course, you can work around the sketchy teammate A.I. by playing three-man online co-op (there is no split-screen option) with each player controlling a Transformer. The game is damn good played alone, but finding a couple buddies to join the fray takes things to another level.

In addition to campaign co-op, the game also comes packed with Escalation, which feels like the offspring of Gears of War 2’s Horde Mode and Call of Duty: World at War’s Nazi Zombies as you fight wave after wave of tougher enemies while using earned points to acquire new weapons and open doors. The difficulty ramps up in a hurry, making teamwork much more important than in similar modes found in other games. On the downside there are only two maps.

The competitive multiplayer is engaging, and it gives Transformers: War for Cybertron the longevity that the campaign simply can’t offer. You can play as any of the four classes outlined earlier, though here it significantly alters your style. The game allows for some customization of both your Autobot and Decepticon forms as well the ability to upgrade your skills as you level up. There’s even a version of Modern Warfare 2’s Prestige here called “Prime Mode,” which resets your abilities and unlocks some new challenges.

In terms of multiplayer modes, all of the usual suspects (Deathmatch, Capture the Flag, Team Deathmatch) are represented. The game caps the number of players at 10, which is below what many games allow, but with giant robots doing battle on the ground and in the sky it serves to keep things from getting overly cluttered.

Transformers: War for Cybertron is easily the best Transformers game ever made. Even without that hook, however, this would still be a strong third-person shooter with good replay value thanks to its co-operative and competitive multiplayer offerings. I’ll resist the urge to end this review with any number of Transformers quotes I’ve got floating around in my head — instead, I’ll just say that if you’re a fan of the original cartoon this is the game you’ve been waiting for.

By Herija Green
This entry was posted on Monday, July 5th, 2010 at 1:39 pm and is filed under Herija Green, Video Game Reviews. You can follow any responses to this entry through the RSS 2.0 feed. You can leave a response, or trackback from your own site.