The Wire Troll: Do You Like a Little Moonshine? 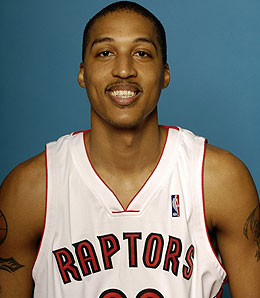 Jamario Moon is doing a fantastic job on the boards for the Raps.

This week I don’t really see too many guys out there worth taking a chance on. Of the few, I would really try to hold what I’ve got if possible. You don’t want to be FA guy — the dude in your league that is constantly dropping and adding players, only to drop the guy you just got for someone else, and so on. So, this is the week where I take a chance on only two players and hold on to the rest.

Jamario Moon: Over the past week, Super Jamario has averaged 9.3 PPG, 10.5 RPG, 1.8 BPG, and only 1.3 TOPG. Limited minutes or not, those are pretty solid numbers for a waiver wire SF. With most of the Raptors’ stars ailing with nagging injuries, Moon is making the most of his time on the floor. If you need some additional depth at forward, you could do much worse than Moon. By the way, what a great story this dude is. Not even drafted and he didn’t play Division I college ball, but he’s making a case for ROY votes in the early going.

Carlos Delfino: Delfino plays in an offense that doesn’t allow for any one guy to break out, which is not a great thing when you can stroke it like he can. I like him for the points and boards (17.5 PPG/6.3 RPB in the last week), but his streak could end at any time on a team like Toronto. Take him, but keep an eye on his shots per game. He comes across as a laid back and very quiet guy, but as long as Delfino’s numbers are screaming out the way they currently are, who cares?

By James Morris
This entry was posted on Thursday, December 6th, 2007 at 3:31 pm and is filed under BASKETBALL, James Morris, The Wire Troll. You can follow any responses to this entry through the RSS 2.0 feed. You can skip to the end and leave a response. Pinging is currently not allowed.