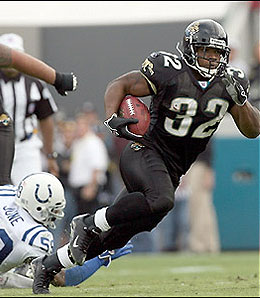 We’re expecting Maurice Jones-Drew to bounce back in a big way against the Bills this week.

1. Brian Westbrook @ Patriots – I should probably be scared off by Westbrook for a couple reasons. The first is that he isn’t truly healthy. The second is that the Eagles are facing the Patriots, and will probably be out of the game by, oh, I don’t know, the third series of the game. But it’s Westbrook. He’s had one useless game all year, and that was when he missed a contest with an injury. I have faith.

2. Maurice Jones-Drew vs. Buffalo – Despite very limited touches last year against the Bills, Jones-Drew managed 125 total yards and a score. The Bills’ defense is worse this year and Jones-Drew is getting more touches. It could be a very big game, indeed.

3. LaDainian Tomlinson @ Ravens – Unfortunately for Tomlinson owners, the Chargers’ schedule continues to be dotted with tough run defenses. The Ravens certainly fit that bill. On the plus side, Tomlinson did have a great game against Baltimore in 2003. That counts for something, right?

4. Joseph Addai @ Falcons – I’ve talked about my worries for Addai. You know the story about how Marvin Harrison’s injury has the Colts’ passing game no longer keeping defenses from focusing on the running game and so on. Well, this all goes out the window against Atlanta. Addai should have plenty of room to score a touchdown or two.

5. Willie Parker vs. Dolphins – I guess it took nine weeks for Parker’s wheel’s to come off. Thanks Mr. Tomlin. This is a very important game for Parker and his fantasy owners. If he struggles here, you might be looking at a lame duck for the rest of the season.

6.Willis McGahee @ Chargers – I really don’t like this pick. The problem is that every other back either has worse matchups, is injured, or just plain stinks. So I begrudgingly present to you McGahee, a running back that is the only offensive player the Ravens have (as far as I can tell) and is facing a decent run defense. Yuck.

7. Maurice Morris @ Rams – So Morris is running very well behind the same line, on the same offense that Shaun Alexander so gloriously floundered behind and on. So, that must mean that Alexander’s career is over due to the abuse that Mike Holmgren put him through a couple years ago. Cause and effect, people!

8. Chester Taylor @ Giants – Maybe he is Jesus?! The lesson last week was that the Vikings’ offensive line is playing at an extremely high level. In fact, they might be as good as the Chiefs’ lines from a few years ago. That, and Taylor has some talent himself. I don’t expect another game like last week, but 100 yards and a potential score seems about right.

9. Jamal Lewis vs. Texans – I’ve taken some shots at Lewis in the past, but he’s making the most of his chances this year. I could point out how defenses have to respect the Browns’ passing game so much that most opponents probably couldn’t name Cleveland’s running back, but that would be sort of mean of me.

10. Steven Jackson vs. Seahawks – I realize that you’re going to go ahead and start Jackson no matter what I say, but something worried me from last week. Jackson had 12 second half carries for five yards. Five yards!? Seriously? Either he got injured or the time he spent off left him with the stamina of a six-year-old. Either way, I’m sort of not as thrilled as I could be with Jackson.

12. Clinton Portis @ Bucs – This really isn’t a great matchup for Portis, but I have no choice but to put him in the top 15. I think he might break a 30-yard touchdown in this one. I don’t know why, but if it happens, I’m awesome. And if it doesn’t, well, no one will remember. Yay.

13. Marion Barber vs. Jets – I think the trend of Barber getting fewer carries will continue, but the Jets are really bad defensively, despite holding Willie Parker down last week. Barber really has to get a touchdown in this game, maybe two.

14. Kolby Smith vs. Raiders – Here’s a sneaky start for you people. My theory is that the Chiefs’ line, much like the Seahawks’ line, really hasn’t fallen off as much as people think. And the problem was really that Larry Johnson had lost his burst, power, and drive. Smith still has that and will make the most of his chance. He may not get a touchdown, but his yardage will look good.

15. Edgerrin James vs. 49ers – There’s really something magical about these Cardinals-49ers games. Actually, NFL ticket was made so I could watch this one.

16. Ryan Grant @ Lions – Could Thanksgiving be Grant’s true coming out party? I wouldn’t put it past this Packers’ team. It just feels like good things are going to happen for them. And I’m not talking about Turducken. Well, I guess I am a little bit.

17. Reggie Bush @ Panthers – If you’re wondering what’s wrong with Bush, it’s very simple. His running back vision is fatally flawed. He takes the wrong routes to get through defensive lines. He relies too much on flat out speed, and tries to take circuitous paths. In college, this worked well. He could outrun just about every defensive opponent in college by a good deal. That’s not the case in the NFL. Unless he starts to use his blockers effectively, he’ll always be a disappointment.

18. LenDale White @ Bengals – If he’s healthy and gets 20 carries, he’ll be a legitimate number two fantasy back. Unfortunately, both of those things are in some doubt as Sunday approaches. Just watch the situation.

20. Brandon Jacobs vs. Vikings – Jacobs is banged up and facing a Vikings’ defense that eats running backs alive. That’s a very bad combination.

By Andy Goldstein
Tags: Maurice Jones-Drew
This entry was posted on Thursday, November 22nd, 2007 at 6:08 pm and is filed under Andy Goldstein, Cheat sheets, FOOTBALL. You can follow any responses to this entry through the RSS 2.0 feed. Both comments and pings are currently closed.