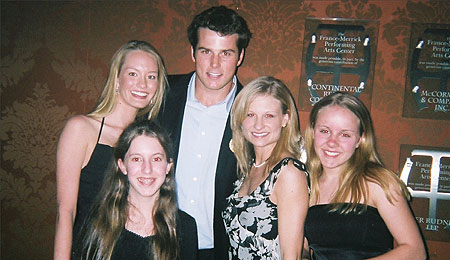 With Steve McNair’s shoulder aching, Kyle Boller starts for the Ravens. Believe it or not, he still has some fans.

1. Tom Brady vs./@ ______ – For the rest of the season, this will be the first ranking barring some unforeseen event. It doesn’t matter who he plays. He’s having a season for the ages.

2. Tony Romo vs. Redskins – Most years, Romo would be the top-scoring quarterback, but this isn’t most years. Still, he’s a nice alternative to those who have Brady. The Redskins possess a hard-hitting secondary, but that’s hardly reason to have any second thoughts on the Dallas phenom.

3. Peyton Manning vs. Chiefs – Hey, at least the yardage numbers were good. The past week made me question how good Manning really is. Don’t get me wrong, he’s still a fine quarterback, and I’m sure the lack of preparation with the receivers hurt him. But every quarterback in the league has to deal with that. In fact, half the quarterbacks in the league probably would have killed for his Reggie Wayne-lead corps. I really don’t want to take anything away from the guy, but if he spent his career with the receiving groups that, say, Donovan McNabb has had to toil with, where would he be? What about Tom Brady’s groups prior to this season? We will never know, but it’s interesting nonetheless.

4. Brett Favre vs. Panthers – For the past 15 years, I haven’t much liked Favre. And it really had nothing to do with him. It was more about the hype around him. How he became almost Wayne Gretzky-untouchable. Yes, he won a Super Bowl, but in actuality, he didn’t seem all that much better than, say, Jake Delhomme. Well, I’ve had a change of heart this year. I actually like him. Maybe it’s because he finally seems like an underdog. Maybe it’s because he hasn’t had much of a running game to help him out, even with the emerging Ryan Grant. Or maybe it’s because I watch Packers’ games with the sound off now. Whatever the case, this has been my favourite year watching the guy.

5. Derek Anderson @ Ravens – Anderson has six games out of nine this year with at least two scores, and only one game without any touchdown tosses. And, for the record, he had 364 yards in that touchdown-less game. The point is, he’s been as consistent a fantasy contributor as anyone this year. Earlier in the season, Anderson had two touchdowns and modest yardage numbers against the Ravens. I think he’ll improve the yardage and keep the touchdowns the same.

6. Ben Roethlisberger @ Jets – Always listen to me. Except when I’m wrong. But that’s not the point. Roethlisberger was a prime candidate for being a top quarterback sleeper, and he’s proving that to be true. In fact, if it weren’t for the Steelers’ defense being very good, especially against bad teams, Roethlisberger could very well be even higher on the statistical charts. His career 8.3 yards per attempt mark compares favorably to Brady, Manning, Dan Marino, Joe Montana, Steve Young, John Elway, and, well, every other quarterback in NFL history. In fact, the only one who comes close is Kurt Warner, who has a career 8.2 yards per attempt average.

7. Carson Palmer vs. Cardinals – What’s up with Palmer this year? He already has five games this year with fewer than two scores. That’s just so unlike him. It could be the lack of a running game threat, what with Rudi Johnson’s injury woes. Still, we’ve come to expect more from this guy. I do think he’ll turn his season around, and it will start with the Cardinals.

8. Donovan McNabb vs. Dolphins – It seems like McNabb is either going to give you a huge game or a terrible one. So I will shock you and say I think he has his first true solid game of the year. That means 250 yards and two scores exactly.

9. Drew Brees @ Texans – Brees has 13 scores in his last five games, and I don’t expect that trend to stop any time soon. The Texans have improved their pass defense, but let up a good number of touchdowns. So, yes, Brees will have at least one interception, but he’ll also put points on the board two or three times.

10. Kurt Warner @ Bengals – Apparently Anquan Boldin’s hip injury will take an offseason to truly heal, which is very bad news for Warner. He’s no longer capable of 300 yards in any game as he was before. Of course, this is not just any game. This is the Bengals! They give up yards and touchdowns as a matter of course.

11. Marc Bulger @ 49ers – I think you have to pretty much consider Bulger and the Rams’ offense back on track. That’s good, because it means I can stop stalking Scott Linehan. It was getting awkward anyway. Ahem. I mean, you can expect 300 yards and a touchdown. Woo!

12. Eli Manning @ Lions – As I mentioned before, Manning has this odd habit of teasing fantasy owners in the early portions of seasons, just to let them down in the second half. So far, that trend seems to be continuing. Of course, it’s the Lions. So even if he does well here, it won’t mean the trend is broken. I just want to put that out there now.

13. Vince Young @ Broncos – That was a sign of life, I guess, from Young last week. Maybe the national audience on Monday night will propel him to actually continue chipping in with the yardage numbers. If not, you’re asking for disaster by starting him.

14. Jon Kitna vs. Giants – My worry with Kitna is not that he will have trouble moving the ball on New York. When he’s upright, he’ll do it well. Unfortunately, the Giants’ pass rush will make Kitna more of a soup by the fourth quarter. That scares me.

By Andy Goldstein
This entry was posted on Wednesday, November 14th, 2007 at 5:06 pm and is filed under Andy Goldstein, Cheat sheets, FOOTBALL. You can follow any responses to this entry through the RSS 2.0 feed. Responses are currently closed, but you can trackback from your own site.