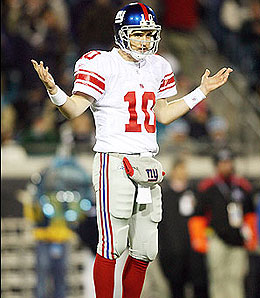 Can Eli Manning hook up with Plaxico Burress again?

1. Tom Brady @ Dolphins – The Patriots aren’t exactly playing nice these days, so I doubt they’ll take it easy on one of their division rivals. Even if they do, Brady is still good for, what, three scores? I’ll take it.

2. Tony Romo vs. Vikings – Romo has been a bit inconsistent, although some of that might be because of tougher opponents. The advantage with Romo playing the Vikings is that there’s no chance the Cowboys’ running game will work. If Dallas moves to ball and scores, it will be done with the passing game.

3. Carson Palmer vs. Jets – Palmer played a decent game last week; he just forgot that he’s not Rex Grossman. The good news is that even Grossman could probably put a dent into this Jets’ pass defense. Imagine what Palmer could do if he actually plays as himself!

4. Peyton Manning @ Jaguars – Other than the Patriots, the Jaguars are Manning’s toughest match up. For some reason, they just tend to match up well against him. That being said, I know you all won’t bench your stud. So I put him at four. Just don’t be surprised if the yardage isn’t much better than 200 yards.

5. Matt Hasselbeck vs. Rams – I’ve been extremely surprised by Hasselbeck’s good play, and the Rams’ defense is not good. Teams have won using the running game, but as long as Mike Holmgren is the coach, Hasselbeck will have a number of downfield passing chances.

6. Ben Roethlisberger @ Broncos – The supposed wide open Steelers’ offense never really made it past Week One. Since then, the Steelers have been much more about the running game. So, basically, it’s standard procedure in Pittsburgh. Still, the Broncos will give up some passing yards, especially if Roethlisberger avoids Champ Bailey.

7. Drew Brees vs. Falcons – That was Brees coming back to us, right? We’re nice people. We just want what’s best for our players. Uh, and our fantasy teams. But mainly we want our players to feel as though they are really contributing. So, come Drew, come back to the light side.

8. Jon Kitna vs. Bucs – I missed the Lions last week. I never thought I’d say that.

9. Eli Manning vs. 49ers – I drafted Plaxico Burress in a dynasty league five years ago. Since then, he’s been on more different teams in our league than any other player. He’s the Kenny Lofton of dynasty fantasy football leagues. I am convinced of that. This is mainly just filler, because I think Manning and Burress will hook up again. I’m really going out on a limb there.

10. Jeff Garcia @ Lions – Have I mentioned that I don’t always try to explain these things? As we all remember, Garcia actually used to be a stud quarterback. He may not reach that level again, but he’s become a legitimate fantasy option for teams with quarterback troubles. And seeing the Lions on the schedule, that has to provide some confidence.

11. Donovan McNabb vs. Bears – The Eagles remain a wildly inconsistent team, but the Bears’ defense is absolutely decimated right now. McNabb is a weak start, but frankly, I’m fascinated to see what happens with this game.

12. Jason Campbell vs. Cardinals – I have a sneaky suspicion that the Redskins’ defense will have something of a letdown in this game, and that could mean they will need to pass the ball on offense. Campbell could actually hit 225 and a couple scores.

13. David Garrard vs. Colts – As I mentioned above, the Jaguars just have a knack for giving the Colts tough games. I’m glad ESPN managed to figure this out. Anyway, Garrard and the passing offense might take a back seat to their better half, but that doesn’t mean a couple touchdown tosses is out of the question.

14. Jay Cutler vs. Steelers – If the Broncos want to have a shot in this game, they will need to win it through the air. Cutler has the potential to make plays. He wouldn’t be my first choice, but he could chip in.

15. Tim Rattay @ Redskins – Well, crap. I knew this would happen. Anquan Boldin comes back and Warner is out. This year needs a pick-me-up. Like a 60-yard Boldin touchdown where he breaks 15 tackles. It could happen, and Rattay could benefit.

By Andy Goldstein
This entry was posted on Thursday, October 18th, 2007 at 8:25 pm and is filed under Andy Goldstein, Cheat sheets, FOOTBALL. You can follow any responses to this entry through the RSS 2.0 feed. You can leave a response, or trackback from your own site.