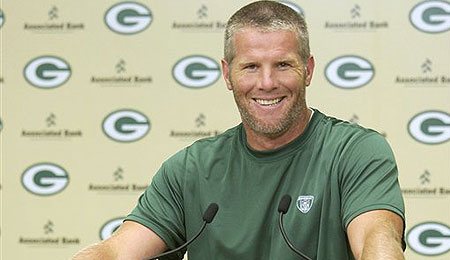 With no running game for the Pack, Brett Favre is passing like mad, increasing his fantasy value.

1. Tony Romo @ Bills – Finally, an easy pick for once. The best fantasy quarterback facing the worst pass defense in the league. Me likey.

2. Tom Brady vs. Browns – While the running game in New England is FUBAR, Brady and the passing game are humming right along. The best news about this game for Brady owners isn’t that the Browns’ defense is terrible against the pass, which it is, but that the Browns’ offense has come alive lately, averaging 34 points per game over the last three contests. As long as Derek Anderson is on target, Brady will have every reason to have a ton of attempts.

3. Jon Kitna @ Redskins – It’s time that I repent. Watching the Kurt Warner– and Marshall Faulk-led Rams were some of my favourite fantasy football memories. When Mike Martz came in and the team and offense sort of fell apart, I held the coach responsible. But in a league where conservative and boring teams go in and out of fashion, Martz has been a consistent beacon of gaudy numbers. So I’m sorry, Mike. You’re my favourite coach.

4. Brett Favre vs. Bears – With the complete and utter absence of a running attack (way to go, Brandon Jackson), the Packers basically have to throw every play. And that has lead to Favre’s rebirth. I remain skeptical about that philosophy, but we’ve seen it used with success in other locations such as Philadelphia. Anyway, the Bears’ defense remains banged up. Favre is a safe play.

5. Peyton Manning vs. Bucs – Well, whatever. Oh! Marvin Harrison is hurt. And so is Joseph Addai. Other than that, whatever. I’m bored.

6. Ben Roethlisberger vs. Seahawks – Something tells me the Steelers are going to play much better this week than they did last week in the loss to the Cardinals. In fact, I think this could be one of Roethlisberger’s better games. The Seahawks will allow plenty of yards through the air. Just don’t expect a ton of touchdowns.

7. Jay Cutler vs. Chargers – Cutler is, indeed, a sneaky start this week. The Broncos’ young quarterback is having his growing pains, but his yardage numbers are solid. Meanwhile, the Chargers can’t stop anyone, Brandon Marshall is coming into his own, and it figures to be an all-around high scoring contest.

8. Vince Young vs. Falcons – I enjoy watching Young on the football field almost as much as I enjoyed Mike Vick’s play. He possesses that je ne sais quoi that makes you keep the station tuned to Titans’ games even as your home team is playing on the other one. Anyway, if he ever gets some consistency, he’ll be a top five fantasy quarterback some day.

9. Matt Schaub vs. Dolphins – Schaub found his footing sans Andre Johnson last week. Unfortunately, he will have to continue to play without Johnson this week (by all accounts) which limits Schaub’s upside. He’s still a starter, but a weaker one.

10. Trent Green @ Texans – I think Green is a deep sneaky start this week. Against the Raiders, he was downright pathetic, but that has to be taken with a grain of salt due to the circumstances. Rainy, sloppy, slippery games are not Green games. He’s a simple drop back passer who is still accurate when all conditions are prime. The weather looks good in Houston for Sunday, so Green should have a shot at 225 yards and a couple scores.

11. Matt Hasselbeck @ Steelers – Hasselbeck has played better this season than I originally anticipated. I’m still not sure how this is happening, but I assume Bill Belichick is at least partially to blame. This is a tough matchup, so I would probably look for other options unless you’re in a 12-team league. And you didn’t listen to me in the preseason. But, why would anyone not listen to me?! Don’t make me laugh nervously.

12. Derek Anderson @ Patriots – I am ready to embrace the Anderson era of Cleveland Browns football. In fact, if I were in charge, I’d be shopping Brady Quinn around. This could be why I’m not in charge. On the other hand, the Patriots don’t exactly allow teams to walk or throw all over them. Save Anderson for later.

13. Eli Manning vs. Jets – The whole family bores me, frankly.

14. Kurt Warner @ Rams – Does anyone else wish the Cardinals just bit the bullet and started Warner until he suffered another concussion?

15. Steve McNair @ 49ers – He played well enough last week. It’s really a shame though, because Mark Clayton was all primed for a breakout season. But he’s been battling injuries all year. Anyway, McNair will utilize his other targets, but the fact remains, starting McNair is basically punting on your game.

By Andy Goldstein
This entry was posted on Wednesday, October 3rd, 2007 at 4:27 pm and is filed under Andy Goldstein, Cheat sheets, FOOTBALL. You can follow any responses to this entry through the RSS 2.0 feed. You can leave a response, or trackback from your own site.