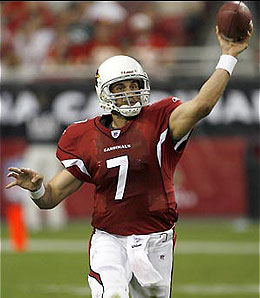 With a great arsenal of weapons to throw to, expect Matt Leinart to jump out to a quick start this season.

So if you were with us last season, you know I took great care to look over every game, every week and point out the worthwhile fantasy starters from each one. Well, why deal with all that fluff? This season, Derek and I will count down the top 15 quarterbacks, 30 running backs, and 45 wide receivers each week. So, without any hesitation, let’s get started with quarterbacks.

1. Peyton Manning vs. Saints – If there’s one expectation I have for the Thursday night game, it’s that it will be a high-scoring affair. Manning hasn’t thrown for more than 300 yards in Week One since his rookie season, but his touchdown totals tend to be pretty good. Even if the yardage ends up looking a tad low, expect two or three scores.

2. Drew Brees @ Colts – Looking into my crystal ball, I see the Colts getting out to an early lead, Al Michaels holding up a “Peyton for President” sign, and Roger Goodell suspending someone live at half time. Okay, I’ll grant the fact that my crystal ball works a little differently than most. The point is, the Saints will need to pass a lot to get back into the game, and that means good statistics for Brees.

3. Donovan McNabb @ Packers – McNabb has had no shortage of success against the Packers, and that should continue here in Week One. It is a little risky to throw McNabb out there without knowing for certain he’s fully recovered from the knee injury, but if pre-season action told us anything (which is rarely does), it’s that McNabb is at least confident in his ability.

4. Matt Leinart @ 49ers – As the years have gone on, the Cardinals and 49ers have both made great strides in improving their offenses. With Anquan Boldin and Larry Fitzgerald, Leinart will have absolutely no problem finding open wide outs down the field. So, combine a potent offense and a potentially high-scoring game and you get the fourth-best quarterback option in Week One.

5. Carson Palmer vs. Ravens – Fantasy owners around the country tend to see the Ravens defense in some of their player’s opponent column and get discouraged. Palmer owners, however, can take heart in his 245-yard, 1.75-touchdown average against Baltimore over the last two years. Besides, who else are you going to start?

6. Marc Bulger vs. Panthers – Torry Holt practiced the other day and, reportedly, felt all right. That’s key news to Bulger owners. Without a healthy Holt, the Rams aerial attack would be about as dangerous as a marmoset. Ohhhh…it’s so cute! Ahem. Holt should be good to go, so Bulger should be good for 250 and a touchdown or two.

7. Tom Brady @ Jets – Talking about key injured wide outs, Brady has one in Randy Moss. Like Holt, Moss is expected to play Week One, but he could be more limited than the Rams star. Still, Brady has more weapons than he did last year, which means 225 yards and one or two touchdowns are likely.

8. Ben Roethlisberger @ Browns – With the Mike Tomlin era beginning, it seems as though the Steelers offense will be somewhat more wide open this season. Roethlisberger might be an inconsistent performer, but this match up appears very friendly. Expect 250 yards and a score.

9. Jon Kitna @ Raiders – It’s become chic to respect the Raiders pass defense as one of the better units in the league. I, however, don’t always follow the crowd. When a team plays the Raiders, they tend to gain an early lead and nurse it the rest of the game. This means no down field passing. This means lying statistics. Roy Williams, Mike Furrey, and Calvin Johnson will propel Kitna to 240 yards and a touchdown.

10. Tony Romo vs. Giants – Terrell Owens seems to be mostly happy in Dallas this season, which is music to Romo owners’ ears. Owens has eaten the Giants alive ever since he started playing against them twice a year, and that should continue in this Week One tilt. As long as Romo doesn’t forget there is other talent around him (Jason Witten, anyone?) he’ll have a clean 225-yard and one- or two-touchdown game.

11. Philip Rivers vs. Bears – The Bears defense was somewhat susceptible to the pass last year, but this is a scary game for Rivers. Chicago has enough team speed to keep up with Antonio Gates and there’s no established wide out to break the game open. LaDainian Tomlinson needs to make a contribution through the air for Rivers to be a worthwhile start. I’m seeing 200 yards and one or two touchdowns.

12. Jay Cutler @ Bills – When Nate Clements skipped town, the passing defense in Buffalo took a huge hit. They might continue to be a cohesive group, but they won’t dominate opponents. The Broncos might still lead with the run, but Cutler will be able to take his shots to the tune of 240 yards and a touchdown.

13. Matt Hasselbeck vs. Bucs – We’ve made no secret about how we feel about the Seahawks offense this season, and we don’t think the Seahawks will get off on the right foot. Hasselbeck will try and force the issue to Deion Branch and D.J. Hackett, which scares the crap out of me. I see 200 yards and maybe a touchdown.

14. Brett Favre vs. Eagles – Favre remains the Packers quarterback, which is something of an upset unto itself. He has had mixed results against the Eagles over the years. Also, Donald Driver is banged up, which could mean even more struggles on the frozen tundra. Here’s hoping Favre can prove me wrong and pass for more than 200 yards.

15. Alex Smith vs. Cardinals – Darrell Jackson is having hamstring issues and that doesn’t bode well for Smith. If Jackson is slowed, Vernon Davis would have to step up. While that’s certainly possible, I wouldn’t rely on Smith this week unless it’s an absolute last option. He’s got a chance at 200 yards.

By Andy Goldstein
This entry was posted on Wednesday, September 5th, 2007 at 8:23 pm and is filed under Cheat sheets, FOOTBALL. You can follow any responses to this entry through the RSS 2.0 feed. You can skip to the end and leave a response. Pinging is currently not allowed.