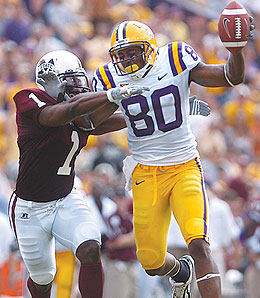 Dwayne Bowe could challenge Eddie Kennison for a job this season.

Six years ago, Reggie Wayne was taken 30th overall by the Indianapolis Colts. He has gone on to play in two Pro Bowls. Between that pick and this year’s draft, no other wide out taken in the latter stages of the first round has gone on to produce much of anything. Enter Dwayne Bowe, taken 23rd overall by the Kansas City Chiefs. Bowe has the pleasure of joining an offense that has…ummm…well, not much going for it. Yes, there’s Larry Johnson, who will probably need mechanical legs in order to repeat last season. And Tony Gonzalez is still around, although I’m pretty sure he’s pushing 50 now. But fear not, Damon Huard has a firm grip on the starting quarterback job.

Okay, so the offense probably isn’t going to be putting up 30 points a game, but this could be a good thing. The Chiefs could find themselves down in a majority of games this season, needing to air it out much more than they have in the past. That, and Gonzo et al. won’t dominate touches as they have in the past. This is an offense that is ready for a young receiving threat. In fact, they’ve been ready for Bowe for about three or four seasons now.

The former LSU star is, to put it simply, very good. In fact, he’s very, very good. Many NFL onlookers might even say JaMarcus Russell went too high because of how good Bowe (and Craig Davis) made him look. The 23rd overall pick possesses great physicality and yards-after-the-catch ability. Those traits seem to be better indicators of NFL success than speed does (think Roy Williams and Anquan Boldin).

So you’re wondering what to do with Bowe come draft day, aren’t you? Obviously, you don’t want to put yourself in a situation where you need to rely on Bowe for, well, anything. Rookie wide outs, even ones who become perennial Pro Bowl participants, very rarely produce much in their frist season. That being said, the ones that do (Randy Moss, Boldin) are fearless, tackle-breakers who make the most of their opportunities. That’s the kind of player I envision Bowe being. If you need a fifth wideout late in a draft, taking a flyer on Bowe seems to be a gutsy, ton-of-upside-pick. It still beats taking Eddie Kennison.

By Andy Goldstein
Tags: NFL
This entry was posted on Friday, June 8th, 2007 at 1:18 pm and is filed under Andy Goldstein, Draft report, FOOTBALL. You can follow any responses to this entry through the RSS 2.0 feed. Both comments and pings are currently closed.