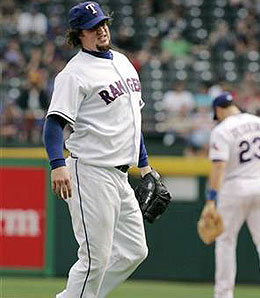 So, you drafted your team and either someone is already on the DL (Eric Gagne, Kazuo Matsui, B.J. Ryan, etc.) or you took Alex Gordon hoping for the second coming of George Brett, but got a guy hitting more like George Straight. Not to worry, RotoRob writer James is here to the rescue.

This week we kick off our new baseball column, The Wire Troll, which will provide you with tips on who to target each week. For the debut, we’re going to take a step back offer some insight on how to best use the wire, so without further ado, here are some simple, yet effective tools to scour the waiver wire and decide who is right for your team.

1. Don’t get too excited or nervous about stats in April or even mid-May. Sure, Orlando Hudson looks like the league MVP while Rafael Furcal couldn’t hit water if he fell out of a boat! Would you bet on Furcal’s BA staying around .200 for the whole season? Me neither.

3. When picking up a DL replacement, find your guy and then see who he plays over the next 15 to 20 days. You want to make sure he isn’t running out there and facing the Mets staff or the Yankees sluggers.

Now that you have the ground rules down, let’s get to some guys you may want to look at for the upcoming week.

2. Cody Ross: Now, Ross is only playing until Jeremy Hermida comes back, but with Hermida looking to be out until the middle of May at least, Ross looks like a solid pick up as he has been playing solid ball in his limited activity. He is a pure rental, and when Hermida is back, Ross should be cut (but bear in mind that Hermida has proved to be rather brittle in his brief big league career to date).

4. Tom Gorzelanny: Hey, he is actually available in one of my Yahoo leagues. Not sure why, but I just picked him up. If he is available in your league, snag him.

Looking for a reliever? Some guys to keep an eye on are: Ryan Braun of the Royals, Matt Capps of the Pirates and Manuel Corpas of the Rockies. These are all pitchers I have my eye on if the current closer should need replacing. Good luck and don’t let me catching you sleeping on the wire if we play in a league together!

By James Morris
This entry was posted on Saturday, April 28th, 2007 at 2:11 pm and is filed under BASEBALL, James Morris, The Wire Troll. You can follow any responses to this entry through the RSS 2.0 feed. You can skip to the end and leave a response. Pinging is currently not allowed.