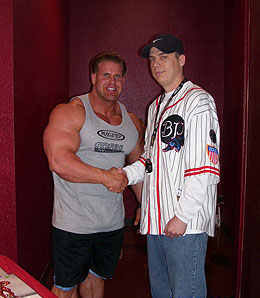 Jay Cutler (the pumped up dude on the left) is next on Rotoob writer James Morris’ endless tour of celebrity meetings.

As if meeting Brooks Robinson wasn’t enough, I made it out and got to meet with the 2006 Mr. Olympia, Jay Cutler at Max Muscle in Rio Rancho, NM. If any of you have ever wondered what a World Champion bodybuilder looks like, here you go (he’s the one on the left, by the way). This guy was freaking ginormous! But, as intimidated as I was of him due to his size, he was an extremely nice guy who signed autographs and took pictures until the final fan was gone.

If you’ve never heard of Jay Cutler (not to be confused with the Denver Broncos QB, that is), check out his web site. Thank you to Max Muscle for hosting the event and bringing him in. And thank you to Jay for not pinching my head off with his thumb and baby finger.

By James Morris
This entry was posted on Thursday, April 12th, 2007 at 10:38 pm and is filed under Event coverage, James Morris. You can follow any responses to this entry through the RSS 2.0 feed. Both comments and pings are currently closed.