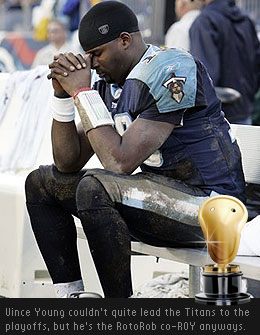 LaDainian Tomlinson – No surprises here. Tomlinson leads the league in rushing yards, rushing touchdowns, yards from scrimmage, total touchdowns, and had as many touchdown passes as Daunte Culpepper. The dude scored more than Paris Hilton this year, and that’s not easy to do. Honourable Mentions – Drew Brees, Peyton Manning, Larry Johnson.

Chris Chambers – Yes, I could go with first-round busts like Shaun Alexander, Edgerrin James, or Carnell Williams, but I could argue no player hurt fantasy teams like Chambers. With the aforementioned running backs, fantasy owners knew not to use them for large chunks of the season. They certainly killed teams this year, but at least you knew you had to put someone else in your lineup. Chambers consistently did just enough one week for owners to keep him in their lineups, just to see him put up a worthless week the next. Dishonourable Mentions – Alexander, James, Williams, LaMont Jordan.

Vince Young and Maurice Jones-Drew – This was the hardest pick for me. Young came off the bench and did the Mike Vick routine better than Mike Vick. His interceptions have been high, but I expect him to be a consistent fantasy performer for many years. MoJo, meanwhile, was the little engine that could for the duration of the season. He scored an amazing 14 touchdowns despite not being the lone back until Week 15. If Fred Taylor isn’t around next season, MoJo could be a top 10 pick. Honourable Mentions – Marques Colston, Reggie Bush.

Fantasy Comeback of the Year

Javon Walker – It wasn’t a big year for comeback seasons, but Walker deserves recognition for returning to top 10 wide out status. After a breakout 2004 campaign, Walker held out in the 2005 preseason in hopes that the Packers would reward his play. The organization (i.e., Brett Favre) called him out, and Walker relented. He went to camp and was injured in the first regular season game. Denver gave him a chance, and Walker has made the most of it. Plus, let’s be honest, 1,000 yards with Jake Plummer as your quarterback (for most of the games at least) is the same as 1,400 yards with anyone else. Honourable Mentions – Terrell Owens, Darrell Jackson, Brian Westbrook.

Fantasy’s Most Hated Player of the Year

Brandon Jacobs – Tiki Barber had a pretty good season, as long as touchdowns didn’t count in your league. His two scores (one more than Carnell Williams!) haven’t made too many fantasy folk worried about his end-of-the-year retirement. Jacobs was the main reason for Barber’s lack of touchdowns. He stole nine trips over the stripe from his mentor, but don’t fret. The ire the fantasy world has now for Jacobs will be nothing but love when he has a top 15 fantasy running back season next year. Dishonourable Mentions – Julius Jones (or Marion Barber?), Corey Dillon (or Laurence Maroney?).

Fantasy Savior of the Year

Frank Gore – With more than half of the first-round backs this season winding up as varying degrees of busts, it was up to the second- and third-tier backs to pick up the slack. Gore, taken no earlier than the fourth or fifth round in most drafts, did more than just fill in. He only had five games all season with no touchdowns or less than 100 rushing yards. He ranks third in rushing yards and fourth in total yards from scrimmage. His health will probably always be an issue bubbling under the surface, but no one can deny he’s as talented a back as the NFL has. Honourable Mentions – Willie Parker, Brian Westbrook, Chester Taylor.

The Bengals get a nod for instituting the ‘jerk’ hot line that allows fans to call 381-JERK to report on fans swearing a blue streak, scrapping or doing other unruly things in the stands. Once a call is made, security will monitor the complaint via 38 cameras set up in the stadium to see if action is required. Does rooting for the opposition constitute unruly behaviour? Would you be shocked if it did?

Maurice Clarett has truly proved he’s the salt of the earth. Currently serving seven and a half years in jail, he’s obviously one of the most misunderstood people of his time. A tremendously gifted running back who just happened to allegedly be involved in an armed robbery, allegedly have a hatchet, AK-47 and several other handguns in his car and allegedly be associated with an Israeli organized crime leader.

Hey, that stuff can happen to anyone, right?

Tennessee has rebounded nicely this year, thanks in no small part to the Titans’ deadly mascot, T-Rac. Earlier this season, while driving a golf cart at halftime, T-Rac crashed into Saints’ reserve QB Adrian McPherson, knocking him to the ground for several minutes and ultimately knocking him out of the game. McPherson suffered a knee injury in the mishap, but it was not considered serious. Still, does this help or hurt T-Rac’s chances of making it back to the Pro Bowl for a sixth time?

Chad Johnson unveiled a shiny new gold Mohawk, which was stylish enough to begin with, but when combined with his shiny gold earrings, it laid to rest any silly notion that men didn’t know how to accessorize.

Koren Robinson is a slam dunk for the RotoRob Sobriety Award, racking up multiple drunk driving charges. His latest episode, in August, came along with charges of fleeing from the police. If Robinson could stay sober for even a few months, he could be a Pro Bowl quality wide receiver. But, alas, he seems to prefer the Pabst route to the post route.

A 15-year-old football player with the Layton (Utah) HS junior varsity team was kicked off the squad for putting thumbtacks in his gloves for the postgame handshake. Talk about being as tough as nails’wow.

By Andy Goldstein
This entry was posted on Monday, January 1st, 2007 at 6:08 pm and is filed under Andy Goldstein, FOOTBALL, RotoRob Awards. You can follow any responses to this entry through the RSS 2.0 feed. You can skip to the end and leave a response. Pinging is currently not allowed.