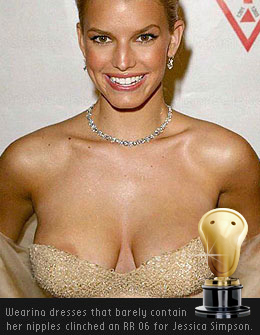 Stud of the Year

Perhaps it was the much-publicized breakup from her famous Newlywed co-star that keeps Jessica Simpson leading the pack in the Fantasy Fashion League. Or maybe it was the launch of her own line of shoes. Either way, she’s kicking butt with her Daisy Duke booty and four-inch stilettos. Simpson is our fantasy studette of 2006.

Teri Hatcher must have appeared more desperate than a sexy housewife this year because she’s a dud in 2006. Compared to the top-notch numbers she earned last year, Hatcher has wilted. Perhaps there’s only room enough for one superstar on Wisteria Lane – and, if so, it’s clearly Eva Longoria (she’s earned a massive rock from Tony Parker to prove she’s his ultimate fantasy).

Canada’s own Evangeline Lilly earns top rookie honours for ’06. While she may not be a newbie to the world of TV, her first speaking part ever – as Kate Austen on Lost — has garnered her top marks in the fashion and celebrity world. Kudos to any Canuck who leaves Alberta behind for Hawaii. Lilly has clearly found her way.

Comeback of the Year

Ditching the “dirrty” laundry has helped Christina Aguilera fashion an amazing comeback. With the launch of her Back to Basics album this year, Aguilera cleaned up her act and currently ranks ninth out of 426 celebrities in the Fantasy Fashion League. Not too shabby for someone who not too long ago was being censored by the parents of her much-adoring pre-teen fans. The girl can sing – hopefully she’ll stick just to that.

[Editorial note — the RotoWidow was not responsible for choosing this tasteless photo or writing the cutline.]

By RotoWidow
Tags: Jessica Simpson
This entry was posted on Monday, January 1st, 2007 at 12:54 pm and is filed under Fashion Fantasy, RotoWidow. You can follow any responses to this entry through the RSS 2.0 feed. Both comments and pings are currently closed.