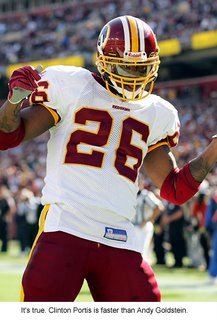 Washington at Houston – Assuming Clinton Portis plays, he is a great option against a Houston team that couldn’t stop me and I have a 6.8 40 time. (That’s just an estimate, of course.) Anyway, leave Mark Brunell on waivers and cross your fingers that Santana Moss comes up with some big plays. For those who are still suffering, it might be time to let go of Chris Cooley. The new offense in Washington doesn’t seem to have the tight end in the game plan.

For Houston, start the normal targets, Andre Johnson and Eric Moulds. Johnson remains a second fantasy wide out while Moulds has turned into a solid third or flex player. Also, keep an eye out for Samkon Gado. He ran well last week and could supplant Ron Dayne and Wali Lundy. As if that’s a challenge.

Baltimore at Cleveland – Other than Jamal Lewis, Todd Heap and maybe Derrick Mason, this game is the black hole game of the week. All Cleveland offensive players should be benched if you can find even a comparable option.

N.Y. Giants at Seattle – If last week’s victory was a coming of age for Eli Manning, a win this week would make him an elder statesman. He is almost a must start after carving up the Eagles in the second half. Tiki Barber, however, may have a tough time going against the second-ranked run defense in the league. If he does his damage, it will have to be out of the backfield in the passing game. Plaxico Burress and Amani Toomer are good starts, but Jeremy Shockey is a marginal one. His injury status is up in the air, but even if he plays, he might be limited.

Philadelphia at San Francisco – Week Two was unkind to the Eagles as a team, but for fantasy owners, it was a bonanza. Donovan McNabb has looked as good as he ever has in his career, BTO or ATO. [That’s before or After T.O. for you neophytes.] Brian Westbrook, on the other hand, is questionable and a shaky start. If he can’t go, Correll Buckhalter would step in and be a sneaky start. Start Dont’ Stallworth, and look for Reggie Brown to be another potential touchdown target in the red zone. L.J. Smith has struggled with dropping passes, but if he has as many opportunities as he did last week, he will continue to put up stats.

The 49ers have been a wonderful fantasy football surprise for many owners. Alex Smith, Frank Gore and Antonio Bryant have all put up two strong games. The Eagles are probably the best defense they’ve faced so far, but I don’t think anyone should go out of their way to stop riding the hot hand. Even Vernon Davis is a sneaky start. The Eagles have often had trouble covering tight ends.

St. Louis at Arizona – Ball control. Ball control. Ball control. Apparently that’s the name of the game for the Rams this season. That’s great if it works, but when you lose to a division rival and only score 10 points, it might be time for a change. Marc Bulger should play well if he’s allowed to air the ball out a little. The run game will be featured, so go ahead and play Steven Jackson despite the Rams being without Orlando Pace. Torry Holt and Isaac Bruce are still start-worthy, but again, if the Rams play close to the vest, they won’t produce as well as they should.

The Cardinals’ offense was a huge disappointment last weekend against a tough Seattle defense. Week Three should be a return to normalcy for Kurt Warner, Edgerrin James, Anquan Boldin and Larry Fitzgerald. Start all four with confidence.

Denver at New England – 38.6. No, that’s not how many times Mike Shanahan will change the starting running back this season. It’s the unfortunate quarterback ranking for Joke Pl…err… Jake Plummer. That’s somehow worse than Chris Simms. Although it is ahead of Kerry Collins. Cheers. Anyway, Tatum Bell is the runner this week, although there’s no saying whether that will stick by Sunday. (Or by tomorrow for that matter.) As long as Plummer is throwing ducks, Javon Walker and Rod Smith are marginal flex players at best.

Tom Brady has struggled with the JV receiving group he’s been forced to work with. Chad Jackson played well last week, but might not play Sunday because of injury. Only Ben Watson is worth a look, but I get the impression that without any wide outs taking away some attention, Watson will continue to be bottled up. The Denver run defense has been awful, which makes both Patriots’ running backs intriguing plays. Corey Dillon suffered some sort of injury last week, but the Patriots will never tell you what it was or how bad it was. Use him at your own risk. Laurence Maroney has played extremely well and is a good flex player.

Atlanta at New Orleans – So the ninth-leading rusher in the NFL is Michael Vick. The Falcons’ quarterback is on pace for 1,400 rushing yards. Interesting. He’s a start as long as he’s healthy. Talking about rushing totals, Warrick Dunn’s pace would put him over 2,000 yards. He’ll struggle to score touchdowns, but in yardage-heavy leagues, he’s gold. The receiving options will be inconsistent as long as Vick is at the helm. Even Alge Crumpler hasn’t been studly.

The Saints reopen the Superdome on national television (good to see the NFL isn’t going to exploit that event at all) and it probably means the home team will be just a little bit fired up. Drew Brees, Reggie Bush and Joe Horn are good options, but Deuce McAllister may struggle against a stout Atlanta run defense. Marques Colston and Devery Henderson are sneaky flex options.

By Andy Goldstein
Tags: Washington Redskins
This entry was posted on Friday, September 22nd, 2006 at 1:11 am and is filed under Andy Goldstein, FOOTBALL. You can follow any responses to this entry through the RSS 2.0 feed. Both comments and pings are currently closed.