Fantasy Football: Do the Auction! 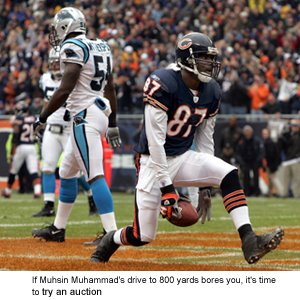 Round nine. You’re sitting there wondering if Muhsin Muhammad might actually amass more than 800 yards or if Trent Green’s imminent fantasy demise can be staved off for another year. Let’s be honest, it gets a little dull after the top 70 or 80 players are off the board. I have one word for you: Auction.

‘ First, you decide upon how much of a bankroll each team gets. The bankroll is not related to real money or entrance fees for the league. A common value is $100 to field a 14-man roster. A good gauge of how much money each team should have to play around with is about seven to nine dollars per player.

‘ Instead of a draft board, the commish needs to keep track of each teams roster and bankroll. A large dry-erase board works very well for this. The commish can also be the auctioneer, but getting someone who isn’t in the league to be an auctioneer is ideal. (Draft Insider Tip No. 1: Do not use anyone’s girlfriend or any attractive woman in general for this. Just trust me on that one.)

‘ Randomly select who nominates first, and the order for nominations will go clockwise around the table/room/sauna. (Draft Insider Tip No. 2: Saunas and dry-erase boards do not mix well.) Anyway, the nomination process is simple. The nominating owner says a player’s name (can be any player) and attaches a starting bid to the player. For example, I might say “Torry Holt — $10.” From there, anyone can bid on the player as long as the next bid is an increase of at least $1 and is a round number (no smart-ass The Price is Right kind of bids like $10.01). When bidding slows down, the auctioneer does a ‘Going once, going twice, sold.’ And then the next player is put up for bidding. This goes on until every team has filled its roster.

‘ There is a very simple answer for this question. It’s more fun. Every owner can play a role in every draft pick if they want to. During snake drafts, each owner is a mere spectator most of the time. Why settle for that?

‘ Any owner can get any player if he is willing to pay for it. If you don’t have a top three pick in a snake draft, you aren’t getting Larry Johnson, Shaun Alexander, or LaDainian Tomlinson. No debate, it’s just not happening. With the auction, you have a shot at any of them. In fact, you could get two of them. The rest of your team will be mostly $1 picks, but you have a chance.

‘ No two auctions are the same. Now, I suppose you could say the same thing about snake drafts, but more or less, the same guys are going in the first five rounds. Many first rounds are identical, but auction drafts vary greatly. For example, in one auction draft I did, wide receiver Roy Williams was nominated early in the draft and he went for $14. In a different auction, he wasn’t nominated until near the end, where I snapped him up for $8.

‘ Auctions require more skill. Anyone can find a cheat sheet that ranks 200 players. Because snake drafts mostly follow a standard general order each season, a simple ranking is all that is needed. Auction values, again, change greatly from draft to draft. It takes quick thinking and mental flexibility for owners to do well in auctions (Draft Insider Tip No. 3: To help level the mental accumen of your competitors, I’d suggest bringing a flask of 200 proof and offering the sharper owners a few hits.)

‘ The early part of auction drafts are often a feeling out period for the league. There are two strategies I employ early depending on the feel of the league. If the league is loose, meaning players are going for over what I believe their value is, I will nominate players I believe are going to be busts. For example, I would nominate Alexander or Tiki Barber this year. In a freewheeling draft, early big names fetch high prices, and part of the auction game is sucking out your opponents cash reserve. On the other hand, if it’s a tight draft, meaning guys are going for under their market value, I will nominate middle of the pack sleepers. For example, I’d throw out Michael Clayton or Frank Gore in hopes that people stay conservative and I can grab a great backup for under their market value.

‘ One of the most exciting techniques in an auction is the bidding war and bidding up players you don’t really want. This is where knowing your opponents can come in handy. If you know, for example, that one of your buddies is a huge Colts’ fan, and he makes a high bid on Peyton Manning, you can bid up on Manning to get his price up. Manning will fetch $20-$25 in most drafts, but certain fanatics will be willing to pay $30-$35. And remember, the more someone pays for a player early on, the less they will be able to get in the way later.

‘ If you want to get your league to change from a snake draft to an auction, you will probably have to sway the minds of a good number of your league mates. People resist change and going away from their comfortable, boring snake. The first argument you will get is that there is nothing wrong with the snake, so why fix it? As I’ve pointed out, there are some things wrong with the snake. It’s boring, it’s unfair, and requires much less skill compared to an auction.

‘ Another argument will be that auction drafts take too long. It’s true that auctions take longer than snakes, but the difference is not as great as many think. The average snake draft will take about one and a half to two hours while the average auction draft takes anywhere from two to three hours. Of course, no part of the auction will be anything less than completely entertaining, so what’s wrong with a longer period of fun again?

If you’ve never done an auction, don’t hesitate to seek one out. Don’t hesitate to start a new league and try it. At the end of the day, if you don’t enjoy it, you don’t have to do it more than once. I will say, however, that 99 per cent of the people who have tried auctions end up preferring them over snake drafts. It does take more time to master, but once you do, you’ll never go back to the snake (voluntarily, at least).

Also, to get you started, I present to you my awesome, spectacular customizable cheat sheets! Quarterbacks, running backs, wide receivers, and tight ends. Oh my! Cheat sheets include the official MVP Fantasy Football podcast rankings for each player, where the general fantasy community values each player, each player’s ADP (Average Draft Position) for both 10- and 12-team leagues, and approximate auction values. Just right click and save. All are in .xls format, so you can bring them into Excel and modify them to your heart’s content. So, yes…it’s the best…cheat…sheet…ever.

‘Till next time, feel free to break out the Jeff George jersey.

By Andy Goldstein
Tags: Auctions
This entry was posted on Tuesday, August 29th, 2006 at 2:30 pm and is filed under Andy Goldstein, Cheat sheets, Draft strategy, FOOTBALL. You can follow any responses to this entry through the RSS 2.0 feed. Both comments and pings are currently closed.