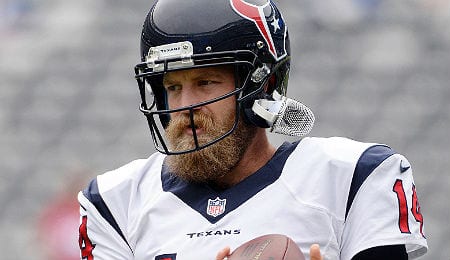 Ryan Fitzpatrick is getting another chance thanks to injury. (Robert Deutsch-USA Today Sports)

Creative fires spawn smouldering ashes and hazy smoke that can lead to poor decisions. For many of you the playoffs are starting and we know the stakes. So let our Wire Troll picks for Week 14 be your sword as you enter Valhalla (or, as some prefer to call them, the Playoffs).

Ryan Fitzpatrick, Houston Texans (CBS: 13 per cent; Yahoo: 7 per cent): We know Fitzpatrick lost his job and only an injury gave him another stab. The Ivy League bred Fitzpatrick seems a little Jon Kitna-esque to us. While Fitzpatrick is never the long-term solution, he can certainly be an acceptable band aid at any given moment. His six-TD pass performance on Sunday (see video below for his reaction) was a mirage because it was against the Titans, but he can certainly hold his own. Fitzpatrick might fake his way into some more quality Fantasy totals down the stretch. With Arian Foster healthy, Andre Johnson still capable and DeAndre Hopkins raging we believe Fitzpatrick is a roster worthy player. Or you could claim Johnny Manziel and LeBron James will apparently give you a high-five.

Zac Stacy, St. Louis Rams (CBS: 37 per cent; Yahoo: 32 per cent): It’s crazy to think Stacy is an available player at this juncture in the season. After all we slotted him seventh in our preseason Running Back Rankings. He’s been essentially third fiddle behind short-yardage specialist Benny Cunningham and rookie Tre Mason who enjoyed the best game of his young career on Sunday by scoring three TDs. Stacy was the man for Rams in 2013, so there is a history there. Though he is not currently the bread winner, it’s evident the Rams are not a playoff team and Head Coach Jeff Fisher is never one to shy away from a RBBC. So if you own Mason, a claim on Stacy can be a nice insurance policy. Injuries or ineffectiveness can dampen anyone and Stacy could be last man standing in the season’s closing month.

Charles Johnson, Minnesota Vikings (CBS: 23 per cent; Yahoo: 18 per cent): The Norse people in the great frozen north believe they have found something in Johnson. His 6’2″, 215-pound frame is strangely similar to that of the slumping Cordarrelle Patterson. Johnson emerged after the Vikings’ bye when he caught six of seven targets in a loss at Chicago. He saw 11 targets the following week against Green Bay and though he made just three receptions he did find the end zone. Johnson had two receptions for 41 yards in Sunday’s win against Carolina and we see him as a mainstay for the foreseeable future in Minnesota. Dynasty owners should smell their reserve WRs and then ask themselves if their future could be brighter with Johnson.

Marqise Lee, Jacksonville Jaguars (CBS: 9 per cent; Yahoo: 2 per cent): Last week we told you to start Lee with confidence because he was the healthiest of all Jags WRs. He did not disappoint as he dropped a stat line of 6/75/1 in the comeback win over the Giants. The former USC Trojan can follow in the footsteps of some very famous alumni (such as Curtis Conway and Keyshawn Johnson), and we believe he is of that talent level. Injuries riddled Lee early but his future on this young team remains intact. A Dynasty stash of Lee now could save your butt your next season and for many seasons to come.

Harry Douglas, Atlanta Falcons (CBS: 18 per cent; Yahoo: 4 per cent): If you saw HBO’s Hard Knocks this summer about the Falcons, you saw a very OCD Douglas. In a healthy way Douglas meets life with respect and cleanliness. Physical health however has been avoiding Douglas since a Week One injury. Roddy White is now hampered by an ankle injury and Douglas filled his role quite evenly, with nine receptions for 116 yards last weekend. Don’t forget Douglas racked up 1,000 yards last season while filling Julio Jones’s injured shoes.