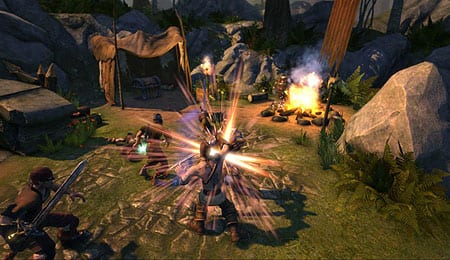 Ah, the high-definition remake. Over the past few years literally dozens of Xbox and PlayStation 2 titles have received the visual overhaul. Some were done with tremendous care, while others felt like quick cash grabs. Microsoft’s Fable Anniversary definitely falls into the former category as there has clearly been a lot of work put into bringing the series’ original entrant up to snuff on the Xbox 360. What that means is it’s how well Fable’s gameplay has held up that becomes the real question.

One of the nicer features of Fable Anniversary is that it has abandoned the clunky original setup and gone with something akin to what we saw in Fable II and III. The game’s melee, ranged and magical attacks are each assigned to a dedicated face button, while blocking and rolling is handled with the right bumper. Holding down the left trigger allows you to lock onto a target, from which you can deftly strike and evade counterattacks. It’s not the most responsive (or natural) setup, but given Fable’s modest difficulty, the limitations almost never hold you back.

One mechanic that does feel woefully out of place is the button-mashing fishing mini game. Here you’ll tap “A” to hook a fish, and then mash on it when the fish isn’t pulling (indicated by a small meter) to reel it in. Some of these encounters can drag on far too long, however, and we grew weary of the process long before we’d snagged all the goodies hiding beneath the surface.

As alluded to earlier, Fable Anniversary is not a rushed product, visually. The graphics are markedly improved over the original Xbox version, and while it may not quite be on par with Microsoft’s work on Halo: Combat Evolved, it’s still a damn fine effort. The world of Fable looks colourful and vibrant, and most of the character models are solid (although some end up a weird mix of cartoonish and semi-realistic). Spell effects also look excellent.

There are some issues in the graphics department, however, most notably when storms hit, as the effect of lightning flashing just looks weird — almost like the world itself is having a seizure. We also encountered some general weirdness, such as characters not loading or loading in stuck at a 45-degree angle, in which glitches have crept into the finished product. It’s not prevalent, but it’s not uncommon, either.

While the soundtrack in Fable holds up quite well, time hasn’t been nearly as kind to some of the voice acting. Nowhere is this more true than when making your way through the world of Albion. Here you’ll be subjected to inane babble repeated ad nauseam (for example, running a race past a group of people in which 80 per cent of them call you a “snail”). Yeah, we heard it the first five times, buddy. Other than that, though, nothing really makes the game feel dated.

At the time of its launch, Fable was known as much for what didn’t make its way into the final product (Peter Molyneux made some lofty boasts prior to release) as it was for what did. Now, a decade later, many of the things that made Fable feel unique have become more commonplace. The ability to make good and evil choices, and having those choices alter the way the A.I. reacts to you as well as your physical appearance, has been seen plenty since 2004. What hasn’t dulled, however, is the charm of both the world and the story.

Orphaned as a small boy, you are raised to be a hero. What kind of “hero” you become is up to you, and that’s the draw of Fable Anniversary. Some missions allow you to lend your abilities to either side of a conflict, and while the main story generally plays out the same, you are given the opportunity to kill or spare some of your adversaries. Beyond that, you can be virtuous and help people, or you can bully, rob and terrorize them. It’s fun to play both ways, and given the game’s considerable length there’s a lot of content being provided here.

We’re sure we’re not alone in considering the original the best in terms of story, and Jack of Blades is easily the series’ top villain. Developing your character, acquiring rare items and partaking in the game’s many optional activities (such as real estate, getting married, etc.) is still rather addictive as we were drawn back in for a full playthrough that ran roughly 20 hours in writing this review. We had forgotten much of the original game since we last played it and with The Lost Chapters (which we never played) included it made for a largely enjoyable experience for reasons beyond nostalgia.

Not everything has stood the test of time, though. The expression system feels completely unnecessary in Fable Anniversary — so much so that we scarcely bothered to sneer or flirt. Being able to easily amass a small fortune early on effectively robs the game of what little challenge it has since weapons and armour aren’t locked behind leveling — once you can buy them they’re yours. There’s also the distinctly British humour, which you’re either into or you’re not. We’re sure some chuckle at the sight of a fat hero with the Union Jack on his skivvies batting Hobbes and farting, but we’re not one of them.

That’s not to say the mood isn’t endearing. It is. It’s just that when the game goes for laughs we ended up producing groans instead. And that sense of almost can be found throughout. The combat, which is fine in moderate doses, can get irritating after a while, particularly when cheap hits break up a hard-earned multiplier that’s key to faster leveling. The story, which is mostly entertaining, can bog down here and there, grinding the game’s momentum to a halt, and so on.

Some HD remakes are driven almost entirely by nostalgia. To its credit, Fable Anniversary isn’t one of them. Its key components hold up well enough to drive the experience forward, and the things that haven’t aged well don’t derail it. If you enjoyed it on the Xbox, this is a great excuse to go back and play it again. And if you missed it, there’s no time like the present to live the adventure.