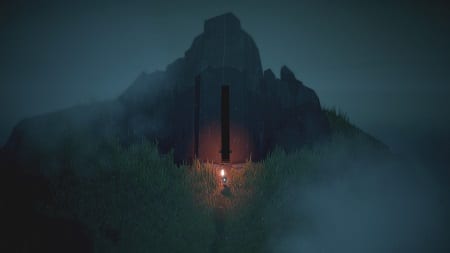 You’ll need to manage light, food, water and cold to survive below.

Out of the hundreds of games we’ve seen showcased or teased over the years at E3, few stuck with us like Capybara Games’ Below when it debuted on Microsoft’s stage back in 2013. In the five-plus years since, updates have been sparse, and, much like fellow Winter of Arcade title Ashen, our excitement had largely faded. Fortunately, the announced release from seemingly out of nowhere, quickly rekindled it, and now, finally, it’s time to venture Below…

Exploration and combat comprise the in-game action, making for a crisp affair as you use a twin-stick approach to target enemies and the right trigger to attack. When your sword is drawn you can use a shield to deflect attacks or the dodge to avoid them entirely. You can also sprint around with a running strike springing from it. While you’ll occasionally get stuck in an animation (such as lighting a brazier or skinning some game), it generally handles quite well.

Using the bow and arrow can be a different matter, however, as aiming feels spotty, and we always preferred melee combat as a result. That’s unfortunate as the odds are already stacked against you, and a more responsive ranged weapon would’ve been appreciated — something the game’s twin-stick approach should’ve made eminently doable.

Resource management is another big part of Below, and you’ll constantly be picking things up, combining them with other items, dropping stuff you don’t need and so on. Working through your inventory is fine, but we just kept wanting to use the d-pad to shuffle through it, which doesn’t work. You have to use the analog stick as the d-pad is used in game for quickly using an item, like a torch or something to rejuvenate health.

It was Below‘s visual style that grabbed our attention all those years ago, and nothing that happened since then has diminished its ability to catch the eye. Everything about the game’s look is excellent, creating a lush yet desolate world just begging to be explored. There’s literally zero direction given to players, which fosters that need to check every path to see where it goes and what secrets may be uncovered.

Below also gets a lot of mileage out of having a sort of “fog of war” effect in which only things within a certain area around you are clear — how wide that area is depends on whether you have the lantern or a torch equipped. Everything else has a stylish haze in which only the twinkle of an item or the red glow of an enemy can be seen. There’s plenty of variety as you descend as well, and each area is beautifully constructed.

There’s no slippage on the audio side, either, with an awesome orchestral score that swells and fades at all the right moments. Ambient sound and effects are perfectly integrated, making those lonely treks into the unknown all the more suffocating. Everything about the presentation is fantastic, and it does a lot to make you forgive some of the game’ shortcomings in other areas.

Below is a dungeon-crawler roguelike, containing virtually no instruction as to how to proceed and only the vaguest outline of story. Things begin with the Wanderer (that’s you) arriving by boat on an island, and from there the only hint about what to do next is provided by the title. So after collecting a lantern and a few other odds and ends you’ll open a door and start heading down.

While you’ll want to thoroughly explore every inch of the gorgeous world, the game isn’t really set up that way as you’ll need to manage four meters: health, food, water and cold. Of the group, it’s food that’s the biggest problem. You’ll find some vegetables and be able to take down small game (foxes, bats, snakes, etc.) for meat, but until you build up a cache of bottles to hold soups and stews, it’s tough to stray far from the beaten path lest you face starvation.

Braving cold areas and water shortages come later when you’re more familiar with the game’s mechanics but still present their own challenges. Enemies can also chip away at your health, and like everything else they get tougher to handle the deeper you go. Environmental traps are another constant hazard and likely the top source for frustration since they’re one-hit kills, and Below punishes you for dying.

Upon being killed, a new Wanderer arrives, and the body from your previous attempt remains where it fell along with all of its inventory and, more importantly, your lantern. Unlike inventory, which can be rebuilt from scratch if needed, there’s only one lantern in the game, and not only is it your best source of light, it’s also necessary to open certain doors. Should you die attempting to retrieve it the next time it’ll be in a random room on the same floor.

Eventually you’ll learn to plan for and, at times, even embrace failures. Early on you’ll unlock “the pocket,” which can be accessed from any campfire and allows you to store food, items, weapons and more to carry from one play to the next. This means you might spend a life gathering supplies or exploring one specific area thoroughly. As you go you’ll also find ways to bypass floors on future runs, and you can set a campfire as a single-use quick-travel point.

When it works there’s an addictive quality to incremental progression, but there are also plenty of times when you’ll just be stymied, spending 20-to-30 minutes gathering supplies only to die a room or two from your body. Also making you do these runs, which were tough enough to kill you, without the lantern makes the return trip even more difficult.

There are frustrations aplenty, but despite lots of empty hours lost to gathering resources and retracing steps only to get beheaded by an insta-kill trap, Below always managed to draw us back for more.