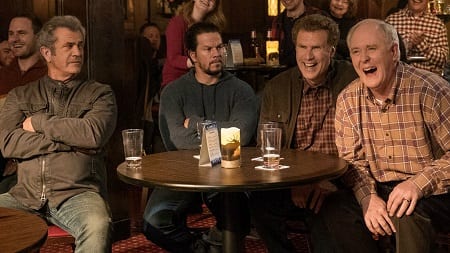 If we were going to pick a sequel for Will Ferrell and Mark Wahlberg to collaborate on it would’ve been The Other Guys 2, but instead of that audiences got Daddy’s Home 2, the follow up to their 2016 movie about the relationship between a nerdy step-dad with his kids and their cool but irresponsible father. And what do you get in Hollywood when there’s a sequel to a movie about dads? Well, more dads, of course…

After butting heads initially, Brad (Ferrell) and Dusty (Wahlberg) have fully embraced the idea of being “co-dads” to Meghan and Dylan. Although they think everything is going well, Meghan gives a speech in front of the school at a holiday assembly in which she complains about the back and forth. To address that, Brad and Dusty decide on “together Christmas,” in which both families will celebrate at one location.

Things get more complicated when Dusty’s estranged father Kurt (Mel Gibson) announces he’s coming into town for the holidays and will be joining the festivities along with Brad’s father Don (John Lithgow), who unexpectedly shows up without Brad’s mother. Almost immediately Kurt steps in and books a cabin for everyone to stay, believing that the extended time together will expose negative feelings that the co-dads are harbouring for one another.

Beyond the dads, other potentially explosive dynamics are in play as well, such as Brad’s wife, Sara (Linda Cardellini), and her jealousy of Dusty’s wife, Karen (Alessandra Ambrosio), along with Sara’s dislike of the influence Karen’s daughter, Adrianna, has on her own daughter. With so many combustible elements, things predictably go wrong. Now the question is whether or not they can reconcile the issues?

Without question Daddy’s Home 2 is funnier than the original. It streamlines the relationship, cutting the unfunny Hannibal Buress character in the process, and lets Ferrell and Wahlberg play off each other. The setting offers more low-hanging fruit for comedy as well, including some good sight gags like all of them dressed and bickering for the nativity.

Sometimes adding more characters dilutes a successful formula, but Lithgow and Gibson both bring something to the table. They’re complete opposites of one another — Lithgow as the doting father and Gibson as the gruff man’s man — and do well in their roles. It’s easy to forget after so much happened off screen that Gibson was a funny guy, but his presence and timing are reminders that he used to be one of the biggest stars in the world.

Cardinelli is given a little more to do this time around, and the movie is better for it. Rather than being the voice of reason between her ex- and her current husband she gets to be the “uncool” mom next to Dusty’s new gorgeous wife, and her insecurity makes for some fun moments.

Odds are you’ll know exactly where this movie is headed by the time the opening “everything is going great” montage has finished. You know they’ll start off happy, things will go wrong, they’ll turn on each other but then eventually everything will work out. That makes the journey the important part, and while we liked it better than the original, Daddy’s Home 2 still has plenty of duds in the joke department (both verbal and physical).

A reduction in plot lines would’ve helped as well. There is a ton of relationship stories going on, and outside of the primary ones we would’ve enjoyed more time given to the better supporting arcs, such as Sara and Karen, and less (or no) time to stuff like Adrianna (who plays the type of kid you’d want to avoid in real life) and Meghan picking on Dylan or Don’s failed marriage.

There’s a little more than 10 minutes of deleted or extended scenes with longer versions of Brad’s speech about women and Kurt trying to buy a shotgun for his grandson as the best of a fairly uninspired group. Beyond that are a collection of “making of” featurettes and a gag reel that has a few funny outtakes — still, for a comedy of this length you’d think there’d be more than four minutes of good screw ups to show.

Nothing about Daddy’s Home made us think it needed a sequel, but the additions of Lithgow and Gibson breathe life into Daddy’s Home 2 and make it a step up from the original.