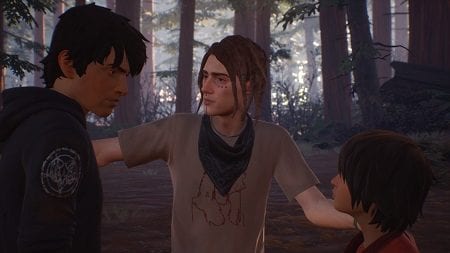 Life is Strange 2 continues its figurative and metaphorical journey with Episode 3, Wastelands. This episode follows Sean and Daniel as they continue their push toward Mexico. Along the way, their path gets them involved in some unsavory activities — not necessarily the worst activity, but certainly something that can involve illicit elements to it. This is the crux of the episode, anchoring the brothers to a location, along with the people involved. This introduces several new dynamics to explore, mostly in the form of new characters.

As Sean and Daniel get to know these characters, they come off as a mixed bag themselves. Some of their circumstances elicit an emotional response but other times, it feels just like filler. At the same time, Daniel is growing more emotionally unstable — understandably so, but it sometimes goes over the top when it comes to emotional response.

The result is an uneven experience, though still a relatively positive one. The writing is generally strong, the core relationship of Sean and Daniel still resonates, and these new elements introduce new dynamics into the story. The problem, though, is that while the game veers off to do a bit of world building, it winds up bogging down the primary story. Because of that, some players will probably get frustrated at the lack of narrative momentum in Wastelands.

It’s a strange (no pun intended) balance, because these interactions offer a strong mirroring effect to Sean and Daniel. On the other hand, they ultimately feel peripheral to the story, a side quest on the brothers’ journey. While never fulling feeling like a distraction, this design can create a feeling of “what are we doing here?” rather than actively pushing things forward.

Wastelands is a case of strong character interactions with limited narrative impact. Sometimes frustrating, sometimes beautiful, this episode fails to really raise stakes while building towards what appears to be a bigger story in the next episode.