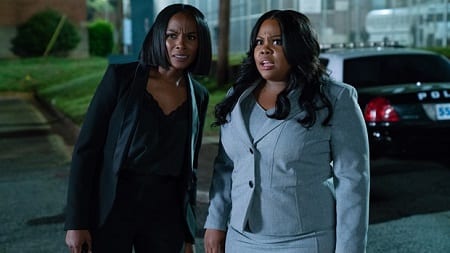 One of the many people Danica mistreats without consequence.

Not to be confused with the Paul Newman movie of the same name, Nobody’s Fool pairs writer / director Tyler Perry with comedian Tiffany Haddish, who seems to be everywhere since stealing 2017’s Girls Trip from a trio of more accomplished actresses. The duo pull out all the stops in this one with pretty much every sexual innuendo you can think of (and probably some you can’t) to fish for laughs. So is it funny? There’s only way to find out…

Marketing agent Danica (Tika Sumpter) seemingly has it all: a successful career, complete with “high six-figure salary,” good friends and the man of her dreams, Charlie, though they’ve only spoken on the phone. Into this nirvana comes Tanya (Haddish), Danica’s sister that comes to live her after being paroled from prison. Aggressive and relentlessly crude, Tanya is everything that Danica is not.

On her first day out, Tanya accompanies Danica to a local coffee shop run by Frank (Omari Hardwick), who is very interested in dating Danica. To help her, Frank hires Tanya to work at his business and soon learns that Charlie is a long-distance relationship. While he ponders that, Tanya begins to suspect her sister is being catfished, contacting the MTV show about it and eventually tracking his calls back to a trailer park.

After confronting the man (played by Chris Rock), Danica falls into a depression and, after some initial misgivings, begins a relationship with Frank. Just when things seem to be going great, however, the real Charlie arrives, throwing Danica’s world for a loop as she must now determine where her heart truly lies.

Haddish is relentlessly hunting for laughs from her first scene until the last, and while some of her shtick falls short in a way it didn’t in Girls Trip — where her screen time was handed out more judiciously and she had better talent around her — she’s still the best part of the film. It’s mostly raunchy to be sure, but it’s hard not to crack up when she’s setting Rock’s hair ablaze or earnestly asking Frank why his car won’t allow her to give him head.

A couple of supporting characters deliver in underutilized roles with Whoopi Goldberg, who plays Danica and Tanya’s mother, and Missi Pyle, Danica’s boss, are both pros and own the screen during the few scenes they’re in. Hardwick does a solid job, especially during his time with Haddish, but he’s also saddled with an absurd character arc.

While there’s definitely fun to be had for much of the film, it really falls apart late, starting with the arrival of Charlie. After being presented as Danica’s ideal man and soulmate based on over a year of phone conversations, all of it goes to hell in a single date as apparently Charlie is actually a self-centered cheap prick (and a lousy lay) — he was just able to conceal all of those flaws during hundreds of hours of talking. It’s just ridiculously dumb and lazy.

Frank is easily the most likable character, but his back story is like some sort of fever dream as an ex-convict that has become so successful in his second life as the owner of a coffee shop that he can afford his own cabin. He also hands out daily roses to Danica and never charges her for her coffee, allows her treat him like shit and asks for seconds. The part where he tells her to “f**k off” is the most genuine moment in the film, even if it eventually counts for nothing.

There’s no one to really root for here, which is a problem in a romantic comedy. Danica is pretty much awful, treating people badly throughout, and yet for some reason we’re supposed to hope she finds happiness. Why? Tanya is there for laughs and isn’t given any depth, making her more a caricature than anything else. And Frank is a doormat.

More than 20 minutes of deleted and extended scenes is the highlight of the film’s extras, and after watching them it’s unclear why some of it wasn’t used in the final version — for example, the alternate version of the disastrous pitch meeting is much funnier than what made the cut. Much of the gag reel can already been seen during the movie’s credits, and the rest of the stuff is short looks at characters and relationships within the film.

Whatever success Nobody’s Fool finds comes from its zanier comedy moments. Unfortunately, those dry up in the final third and we’re left with the insipid romance.