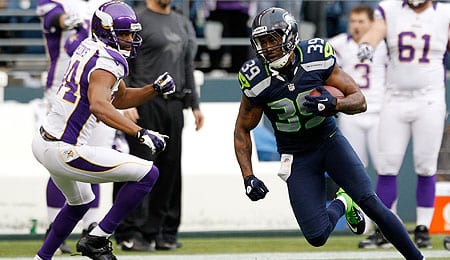 As the NFL free agency period swung its doors wide open last week, we experienced many emotions. So, if you were having troubles texting last week, it was because our NFL writers were texting each other more than a 16-year-old girl at a Twilight premiere.

It does seem odd to us that teams with some major holes to fill are spending big bucks. We find this peculiar because experts say this year’s draft is deeper than ever. However, if NFL teams don’t spend all of their cap money, the league reserves the right to seize the extra dough and distribute it to the players as it sees fit. So cheers to the surplus and here are our winners, held steadies and losers.

There is no doubt about two things when it comes to new Pats’ cornerback Brandon Browner: one, he is a gifted ball-hawking beast; and, two, he will serve yet another suspension. Leave it to Bill Belichick to sharpen another weapon for his gain. Although Browner is known for his occasional cheap shots (see video below), he will produce and thrive under this regime. Oh yeah, the Pats also signed this Darrelle Revis guy, we think he is a CB too.

They did lose Brandon Spikes to rival Buffalo and Vince Wilfork has demanded his release. They will find alternate contributors in the draft, just watch. On offense, they wore down WR Julian Edelman as he took lower than expected to re-sign and they swooped up WR Brandon LaFell on the cheap. Given LaFell’s 6’2″, 210-pound frame and his experience, he could be the factor in the Pats’ offense that everybody thought Kenbrell Thompkins was going to be last season. — JJ

The Bucs came into the offseason with a number of holes after a disappointing 4-12 season, but arguably no team improved more in the first week of free agency. New CB Alterraun Verner signed for a fraction of what they were paying Revis, freeing up some much needed cap space. Running back Doug Martin should be excited about the acquisition of C Evan Dietrich-Smith from Green Bay and OT Anthony Collins from Cincinnati, while veteran QB Josh McCown should provide some stability to a young team.

Many teams would have been content to stop there, but the Bucs also nabbed TE Brandon Myers and one of the top pass rushers available in Michael Johnson, giving their fans some reason for optimism in 2014. — NW

It’s hard to qualify the following teams as either winners or losers based on the first week of free agency. We’ll know more after this week.

After yet another dismal season (4-12), the Jaguars needed a new look, so gone is longtime RB Maurice Jones-Drew, and — in what may be a case of addition by subtraction — former first rounder QB Blaine Gabbert was dealt to San Francisco for a measly sixth round pick (and we would suggest the 49ers overpaid). Guard Zane Beadles and RB Toby Gerhart should provide a spark to a running game that had been struggling recently to put up the numbers Jaguar fans got used to in MJD’s prime.

The front seven on defense also got a major upgrade with DE Red Bryant and Chris Clemons arriving from Seattle, not to mention DT Ziggy Hood and LB Dekoda Watson. There may be work left to be done, but on paper this team looks more talented than last year. — NW

The boys in silver and black had almost $60 million to spend. They then gave a load to virtually unknown OT Roger Saffold, but he mysteriously failed somebody’s physical and returned to the Rams. The Raiders then got another OT (former Jet Austin Howard) for less money. After failing to retain their top priority — DE Lamarr Houston — Oakland ensnared veteran DEs Justin Tuck and Antonio Smith.

The Raiders also added LB LaMarr Woodley and CB Tarell Brown. This defensive haul should tighten things up. In a odd but inexpensive move they also retained RB Darren McFadden. Here’s hoping he can actually play a full season. — JJ

The Mile High city made an immediate impact by grabbing safety T.J. Ward and CB Aqib Talib. Both were regarded as the second best free agent options at their respective positions. Ward is a solid warrior who will relish breaking the shackles of being a Cleveland Brown. Talib has had an interesting and successful career, but he is not very durable.

Denver also made a big splash by scooping up 32-year-old DE DeMarcus Ware, who has been an incredible pass rusher throughout his career. He does have many miles on him and that showed last year as he had a career low in sacks and games played. This trio represents the Broncos going for one or two more title pushes before Peyton Manning retires. While we appreciate the effort, it is certainly a gamble but then again so is free agency.

Will Jerry Jones ever learn? Convinced his Cowboys were on the verge of greatness, he mortgaged the future in an effort to keep a mediocre team together over the last few years, and now they are paying the price. Gone are Demarcus Ware, Jason Hatcher, Anthony Spencer, Danny McCray, and Ernie Sims, and that only covers the defensive side of the ball.

On offense, linemen Brian Waters and Phil Costa, as well as seemingly always injured WR Miles Austin were deemed expendable by the cap-strapped Cowboys. This could be a rebuilding year for a team that, whether realistic or not, expects to contend every season. Poor Tony Romo will face much of the heat if the ‘Boys struggle in 2014, but the blame should be focused on ole Jerry for once again mismanaging the salary cap. — NW

Hailing from the Midwest, these Bengals seem to be living a conservative lifestyle. They have $27 million of cap space and maybe they need to be reminded of that. So far Cincy’s biggest move has been cutting James Harrison. The Bengals need a left tackle and they need a real number two WR. They do have the draft and, granted, the free agency market at each position is somewhat thin. While we are not big on guys like Eric Decker (now with the Jets) and Hakeem Hicks (now with Indianapolis), we would love to have seen them lined up across the field from A.J. Green. Remember how you felt when the Lions signed WR Golden Tate to be paired with Calvin Johnson?

This is a playoff team and a couple more pieces could make it a Super Bowl contender. Cincinnati also needs a CB and it is very likely Darqueze Dennard and Justin Gilbert are gone by the time the Bengals pick at No. 24. With some big-time CBs on the market, we can’t understand why they didn’t throw big money at one of them. Surely a guy like Walter Thurmond (who recently inked a $3.5 million deal with the Giants) might have preferred to go to a contender. We don’t run an NFL team and we are sure Cincy has a plan but if we were Bengals’ fans, we would be a little frantic. — JJ

Now it’s your turn. Let us know in the comments below which teams you thought did well or maybe not so well in free agency last week.