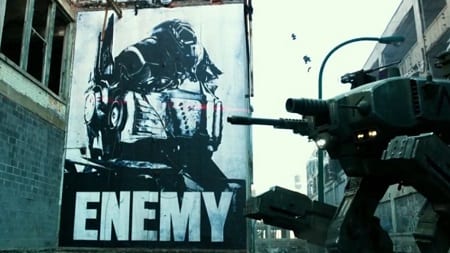 Good to see the Robocop Enforcement Droid is still getting work.

After reshuffling the deck in Age of Extinction, Michael Bay is back with The Last Knight, the fifth installment of his live-action Tranformers film series. This is the second film with Mark Wahlberg in the lead role, but with the exception of a few minor parts and cameos we’re given an entirely new cast, including Anthony Hopkins.

In the dark ages, King Arthur and the legendary wizard Merlin were actually helped by ancient Transformers that had come to Earth to keep a powerful staff from an unknown evil, but they tell them that evil will someday come for the staff — and as luck would have it, that day is now.

In the present, Transformers of all affiliations are deemed enemies of the Earth and hunted by the TRF (Transformer Reaction Force). Cade Yeager (Wahlberg) has become a fugitive as he continues to help and harbour Autobots at a junkyard. One such endeavour ends when he’s given a talisman he believes to be junk, but he soon learns it has real value.

Over in England, Sir Edmund (Hopkins), who is the latest in a long line of stewards that have watched over a secret society’s efforts to conceal the staff, reaches out to Yeager and Viviane Wembley (Laura Haddock), an Oxford scholar and (unbeknownst to her) last living descendant of Merlin. Together, they must find the staff and save the world because…

…the remnants of Cybertron are on a collision course with Earth, led by Quintessa, one of the Transformers’ creators, and a brainwashed Optimus Prime. And they’ll need to do it all while staying a step ahead of the TRF and a pack of Decepticons led by Megatron that want nothing more than to watch Cybertron devour our world.

Much in the same vein as the Fast and Furious series, Transfomers films are about action first, second and third. On that front, The Last Knight is mostly a success. The CGI is very good, and the way it blends with natural scenery is the film’s high point. It doesn’t feel like there are as many melee fights between the giant robots, which is good, since those invariably devolve into something that’s difficult to follow.

For better or worse, Bay seems to love to toe the line between PG-13 and R. There’s no shortage of crude humoUr, middle fingers and use of the word “bitch” here. It’s not always effective — such as when a teenage girl confronts Megatron — but it throws so many attempts at humour that some are bound to get through (like an early Boys in the Hood reference). This movie does not take itself too seriously.

We don’t throw the word “incoherent” around lightly, but the plot is a mess. Characters drop in and out, plot points from previous films are cast aside and lots of things just don’t seem to go anywhere. We literally paused the movie a few times to sort out what was happening within just this film, much less trying to piece together things that carried forward (like didn’t Megatron become Galvatron in Age of Extinction?).

One of our long-standing pet peeves continues as well: made up Transformers. There were so many of them, and yet when Megatron is putting together a team he’s rattling off Mohawk and Nitro Zeus (and a somehow alive Barricade)… C’mon, Michael. These films began as something resembling fan service. How about Skywarp or Thundercracker? Blitzkreig? Astrotrain? Hell, give us Cyclonus!!! Instead we have unexplained baby Dinobots…

Considering how much action is valued over plot, The Last Knight is simply too long. You could’ve comfortably shaved 30 minutes off and been alright. It’s so long that when characters from the first act resurfaced for the third we’d all but forgotten they were in the movie — and it doesn’t help that there’s no viable reason for them to be there.

And there’s the sweet spot: a lack of reason. As the franchise pushes past the 10-hour point it has become an exercise in futility to sort through the plot lines and make sense of it all. So you’re just not supposed to ask why Bumblebee can suddenly talk or reform himself like one of Iron Man‘s suits, or why there are tiny dinobots, or where <insert Transformer name> went, and on and on.

More than 90 minutes of extras are waiting on a separate disc, offering up the usual suite of behind the scenes featurettes about where the movie was shot, how they came up with the plot, what cool tweaks they made to the Transformers themselves and so on. They’re all slickly done, but there was nothing that stood out as must see.

As an action flick, The Last Knight is enjoyable enough. As an extension of the Transformers lore, however, it just keeps getting more convoluted and difficult to follow.