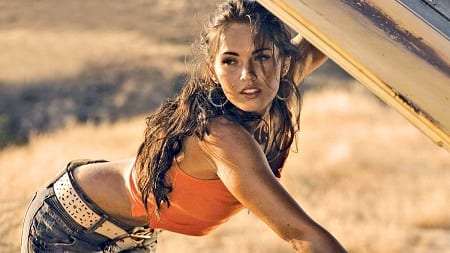 Still the best part of Transformers.

Originally conceived as a line of toys by Hasbro, Transformers was taken from the cartoon/comic realm and brought kicking and screaming into the real world by veteran producer/director Michael Bay. While the series of films, now five deep and still going, has played fast and loose with the source material, it has also offered plenty of action-driven fun.

We reviewed the fifth entry, The Last Knight, on 4K back in September, and now Paramount has seen fit to bring the four preceding movies to that format. Each copy includes the feature film on 4K and Blu-ray, and an additional Blu-ray containing all special features and bonus content. There are no new extras created specifically for the 4K release. A digital copy is included as well.

Still the best of the bunch, the first Transformers film did a respectable job of resurrecting the feel of the cartoon by relying heavily on established Autobots and Decepticons as well as familiar story arcs, such as the confrontational relationship between Megatron and Starscream. There’s also pretty good chemistry between Megan Fox and Shia LeBeouf in the main human roles. It’s a mostly fun two-plus hours.

For as tech heavy and effects driven as Transformers is, the improvement of 4K over Blu-ray is more modest than we expected. Improved brightness and colour palettes are noticeable to be sure, but there’s also more blurriness than we’d like, which undermines the biggest improvement we’d like to have seen: more clarity from the robot fights shot in Bay’s fast-cut style.

Transformers: Revenge of the Fallen (2009)

Two years later Bay followed the original with Revenge of the Fallen, which carried forward the plot but was also proof positive that the live action series would not be bound by the cartoon. Some of the new additions were fine, but the movie is probably best remembered for Skids and Mudflap, who were rightly called out for being racial stereotypes — the pair was dropped from featured films. It’s the worst of the five movies and marks the end of Fox’s time with the franchise (boo!).

As with its predecessor, Fallen doesn’t reap huge benefits from the 4K upgrade, showing an overall picture that’s very comparable to our Blu-ray version. Better colour is again the top upgrade, though some of the fire-based CGI destruction looks more artificial because of it.

It’s out with Fox, in with Rosie Huntington-Whiteley, who takes over as LeBeouf’s love interest. Sad. Anyway, in Dark of the Moon, Bay again deploys one of his favourite plot devices: creating a fictitious rationale for an actual historical event. It’s a fine setup and actually bears a similar plot to G1 episode The Ultimate Doom as Cybertron is brought to Earth. Still, there’s no chemistry with LeBeouf and Whiteley, and it’s no mystery why the series underwent dramatic changes after this one.

While the first two films offered modest upgrades, Dark of the Moon looks noticeably better on 4K. Improved clarity in combat is a real thing here, and the attention to detail on even on the smallest objects is impressive. Unfortunately, it encounters some of the same issues with CGI fires/explosions as Fallen.

It took three years, but Bay returned to the franchise he’d said he was done with to make a fourth installment, this time with Mark Wahlberg in tow. It felt a lot like a reboot, moving ahead to a time when Transformers on both sides were hunted by humans. Wahlberg is a better lead than LeBeouf had become, and Age of Extinction feels fresher than the previous two films. While not great cinema by any means, it comfortably rests as the second-best of the Transformers films.

Perhaps it shouldn’t be a big surprise given it’s the newest of the four movies, but Age of Extinction unquestionably looks the best of the bunch. The 4K upgrade is obvious from start to finish in what was already the series’ most visually interesting installment. It’s definitely in the discussion for what to bust out when showing off your setup.

At this stage, odds are you’ve decided where you fall on the live-action Transformers films, and no visual upgrade will change that. If you are a fan, however, the effects-heavy series does benefit from the 4K treatment, especially Age of Extinction.