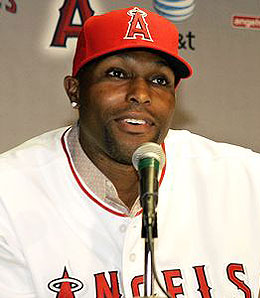 When hunting for a Hunter, we’d take Torii over Pence. (AP Photo/Ric Francis)

To help prepare you for your upcoming baseball draft, we’ve prepared some very top ten lists, which will be unveiled over the next few days.

1. Ryan Braun: I like Braun, just not as high on the totem pole as we’re currently seeing him reside. When I look at a late first round/early second round pick, I want a little bit more history. Ponder this one for just a second. Braun is currently going one slot ahead of top outfielder Carl Crawford according to the most recent Average Draft Reports at Mock Draft Central. What combination of players provides the best scenario? Crawford and Adrian Beltre, or Braun and the three closest outfielders to Beltre in the ADP rankings in Jermaine Dye, Juan Pierre, or Delmon Young?

2. Hunter Pence: Pence most certainly has the potential, but we are talking about a player that has never stolen more than 17 bases at any level in his relatively short career. Granted, this certainly doesn’t mean it won’t or can’t occur, but seeing him currently being drafted ahead of Torii Hunter, Dan Haren, Chipper Jones, Carlos Zambrano and Ian Kinsler just doesn’t cut the mustard for me.

3. Derek Jeter: The face of the Yankees is supporting his current draft position based on a combination of past performance and his real-life value. We play fantasy ball and his contributions other than the batting average have fallen into the marginal levels. Drafting Jeter five slots ahead of Troy Tulowitzki just isn’t a solid play.

4. Any closer drafted before Round Ten: I’m simply not a believer in drafting for the closer slot early. With a position as volatile as this one is, the better gamble is in those second- and third-tier closers as compared to the Jonathan Papelbon, Francisco Rodriguez types. Does your team really need more than one (J.J.) Putz at the helm?

Moving to an offensive jugger”not” in the Giants should do nothing but improve the odds on a repeat of that not-so stellar 2005 season.

6. Jorge Posada: A peak year at the age of 36 does not bode well for success heading into 2008. When was the last time that Posada broke .290 in batting average? The answer would be never, and to expect anything remotely close to that 2007 batting average of .338 would fall into the major reach department. At this stage of his career, a Ryan Zimmerman or Shane Victorino, both in the same ADP range as Posada, have the chance to provide better value, as does a late round gamble at catcher.

7. Dontrelle Willis: A trend has developed here and a move to the Detroit Tigers should not help. The ERA and WHIP keep climbing upwards and the strikeouts keep falling. Stay away; the trend is going to continue especially in light of the fact that Willis now faces the designated hitter and not the pitcher. American League hitters are anxiously looking forward to teeing off on the D-Train in 2008.

8. Travis Hafner: I had the opportunity to watch Hafner flail away in person last summer, and it was not pretty. He looked totally lost last year and his numbers most certainly reflected it. A rebound can’t be ruled out, but I’d rather be gambling with a Carlos Pena or Adam Dunn, if I was looking for that big bopper in the 3-4-5 rounds.

9. Alex Rios: A top 30 player? Not on my draft lists. I certainly believe there is some potential for improvement, but with an ADP that’s currently at 29, is this value or overhype? I’m betting on the second choice here. Having never exceeeded 17 stolen bases means he is not a five-category stud. I’d be looking at a Corey Hart or Nick Markakis long before Rios would be part of my starting outfield.

10. Juan Pierre: If you’re looking for stolen bases and batting average, Juan Pierre is your man. Hmm, did I fail to mention that things are getting awful crowded in the Dodgers’ outfield? Matt Kemp, Andre Ethier, Andruw Jones and Pierre with no designated hitter, means someone is gonna suck up a few games on the bench. No thanks Juan, I’ll find my stolen bases elsewhere.

The Hunter and the Hunted

Will Twins’ fans ever see Torii Hunter rob an opponent’s home run again? Has Torii Hunter played his last game as a Minnesota Twin? When the season wrapped up Sunday, the obvious question facing the 32-year-old free-agent-to-be was what uniform he’d be wearing when he next took the field. Hunter, who has already rejected the […]